The word “nuclear” was uttered exactly once during the second night of the Democratic Party debates last month. It was said by Kamala Harris, in reference to President Donald Trump’s ongoing fascination-slash-obsession with Kim Jong-un, the North Korean dictator who’s currently the world’s most recent—and only—user of nuclear weapons (albeit in test mode only).

Among at least half of Trump’s would-be challengers, nuclear weapons just don’t seem to be that important (and, you could argue, neither is climate change, to which there are no readily available solutions that do not include commercial nuclear reactors). For the other half, who debated the night before Harris took the stage, nuclear weapons do exist—and lo, weapons powerful enough to literally melt civilization are, in fact, a big problem for civilization.

During the first night of the first Democratic debate, “nuclear” was mentioned 15 times, both in the context of the scotched nuclear deal with Iran and in the ongoing nuclear arms race with Russia. When asked, at the end of the first night’s proceedings, to name the biggest problem facing a now and future president, former Maryland Congressman John Delaney and current U.S. Rep. Tulsi Gabbard of Hawaii both named nuclear weapons. (For U.S. Sen. Cory Booker, who must be lots of fun at restaurants with “no substitutions” signs, the answer was “nuclear proliferation and climate change.”)

“The greatest threat that we face is the fact we are at a greater risk of nuclear war today than ever before in history,” said Gabbard—who, following the debate, was briefly the most searched-for candidate, according to search engine analytics.

Were they fact-checking her? If so, the next search was likely for Ambien delivery. Because according to the people whose lives are devoted to this kind of thing, Gabbard is absolutely right.

Under Trump—who has neglected the country’s crumbling infrastructure, stood by and tweeted while the opiate crisis worsened, but somehow managed to follow through on promises to expand the United States’ nuclear arsenal, with new warheads entering production in February and two new designs scheduled to begin production over the next four year—the risk of nuclear war is greater now than at any time since the end of the Cold War, according to the Bulletin of the Atomic Scientists, a prominent nuclear-watchdog group.

The Bulletin is best known for its “Doomsday Clock,” a rhetorical device used since 1947 to try to get citizens to grasp how perilous their lives are in a nuclear-armed world. Since 2019, the Bulletin has kept the clock at two minutes to midnight—the closest to extinction humanity has ever come, a “new abnormal” for which Trump’s freewheeling, bellicose rhetoric and concerted build-up program are to blame.

Modernization of America’s “enduring stockpile,” the euphemism of choice for the country’s arsenal, began under Barack Obama, but Trump has embraced nuclear armament with a zeal fit for a bit part in Dr. Strangelove.

Under Trump, the United States is primed to spend $1.25 trillion over the next few decades enhancing, updating and expanding its nuclear arsenal.

Under Trump, the United States happily exited the Intermediate-Range Nuclear Forces (INF) Treaty with Russia—and under Trump, new warheads started rolling off the assembly line at the Pantex Plant near Amarillo, Texas, the country’s lone (for now) nuclear weapons factory, in February.

“There’s a reason the Bulletin set its iconic Doomsday Clock at two minutes to midnight,” Rachel Bronson, the Bulletin’s president and CEO, said in a statement e-mailed to Observer. “It is [a] very dangerous time, and as Gabbard said, one of the most dangerous periods in history.”

Re-entering a nuclear deal with Iran or crafting a new one is vital to slowing the proliferation of nuclear weapons—which, in turn, is one of the very best methods to ensure nuclear weapons are not used, however “fair” it may be to nations envying the status of China, Russia, India, the United States or other member states of the world’s nuclear club—but “there is a lot more work to do to return to a world when nuclear nations relied less heavily on their nuclear arsenals,” Bronson added.

For some reason, in order to grasp this mortal threat and in order to share your concerns publicly, you must be a whack-job, one of the fringe candidates polling at under one percent, who keeps winning “support” from the alt-right. (Or, you must be Cory Booker, who can also “yes-and” in Spanish.)

At 37, Gabbard is both old enough to have fought in a war some of her potential voters can’t remember and young enough to remember the constant threat of extinction as mostly an abstraction. Yet for her, the nuclear issue has been a constant. On June 14, she pushed for an amendment to the country’s defense-spending bill that would have required the Department of Energy to account for the nuclear waste dump it has in the South Pacific, currently leaking radiation into the surrounding ocean. And what Gabbard said during the debate is what she’s been saying on the campaign trail for months.

The new Cold War is getting hotter. We need leaders with foresight to see how in Venezuela, Syria & other places, potential military conflict btwn US-Russia can quickly escalate into war—nuclear war, the greatest danger we face today. https://t.co/uwjmzilMig

Somehow, this message seemed to fade as soon as Gabbard entered it into the discourse on its biggest stage. In the days after the debate, ABC ran a piece in which it allowed other experts to hem and haw and offer variations of, “Well, OK, maybe, but also maybe not!” Earlier last week, when amplifying Gabbard’s warning, The Nation chose to focus on the money that the arms race is draining from cities and towns in need of, say, an infrastructure upgrade promised by Trump—the exact same argument doves have been making since Eisenhower’s too-late warning about the military industrial complex.

Gabbard is a confounding candidate for both the left and the right. She’s mocked Trump’s neo-neocon crew of military advisers as a “chickenhawk cabinet,” and she’s been criticized for offering warm words for the likes of Narendra Modi, the right-wing populist in charge of India, where religious lynchings have become increasingly common. But on nukes, Gabbard is a moderate realist. She is saying exactly what the scientists are saying, and in the same tone of voice, when the reasonable and justifiable approach is to run into the streets shrieking warnings like a Chicken Little with good intel. When will Kamala Harris, Joe Biden, Bernie Sanders or Elizabeth Warren pick up on this? 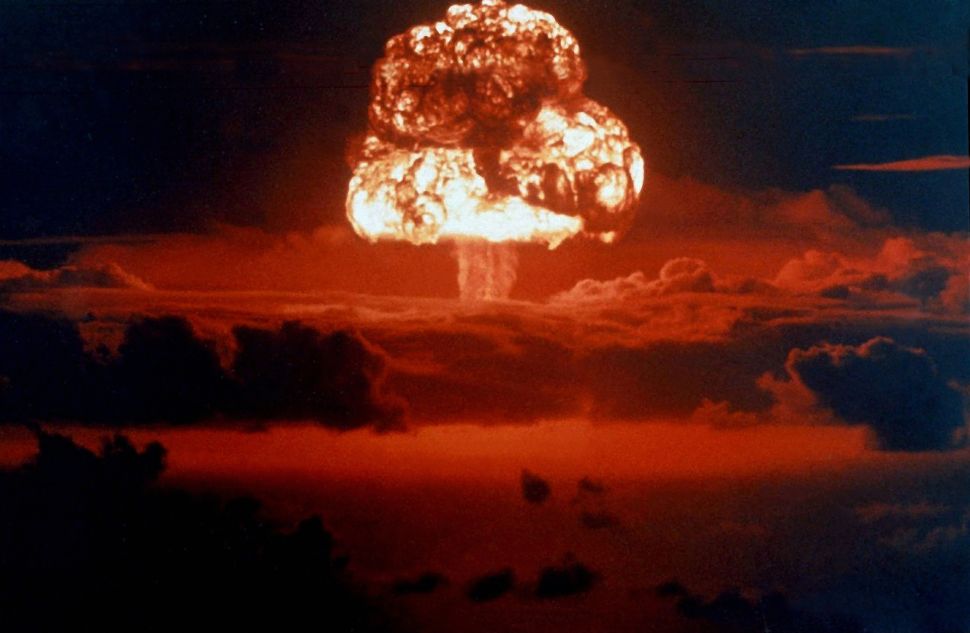