When it comes to watching a new season of a once-canceled and beloved television show, the persistent question is: “Is this good enough to warrant a continued existence or should it have quit while it was ahead?” It’s almost always the latter because it’s rare to find a reboot (or reunion, or sequel) that lives up to the hype of the original or, at the very least, is actually enjoyable. Most are cheesy nostalgia-bait (Fuller House) or failed attempts to recreate success in a world that’s now much different (Murphy Brown). None ever feel necessary.

That’s one of the bigger issues with Veronica Mars, a once-great series (provided you don’t look too deep) that slowly crept downhill. The first season was fantastic, following teenage private investigator Veronica (Kristen Bell) as she tried to solve the murder of her best friend while also navigating the daily annoyances of being a high school outcast. It quickly became a cult hit with a devoted fan base, and it’s this fan base that helped kept the series stay afloat for three seasons and then, years later, raise $5 million via Kickstarter for a 2015 movie. Veronica Mars is one of the most tenacious series: there was a movie, but then that same year creator Rob Thomas started co-writing a series of spin-off novels and CW Seed began airing a meta web spinoff based on the character of Dick Casablancas. And now, thanks to Hulu, we’re getting an eight-episode fourth season that is…fine.

SEE ALSO: The Final Season of ‘Orange Is the New Black’ Cements the Series’ Legacy

Bluntly, the new season of Veronica Mars isn’t awful but there are so many wasted opportunities, obnoxious character shifts, bizarrely introduced and undeveloped plots, a boring and needlessly complicated mystery and an approach to race that is offensive at worst and questionable at best. It is, arguably, better than the last two seasons but it’s also true that those seasons weren’t exactly great. Season 4 is a far cry from the immediacy and charm of Season 1, though there are, at least, some bright spots.

Taking place a few years after the movie, Veronica is now in her thirties and living with her long-term boyfriend Logan Echolls (Jason Dohring), who is in the military and often gone for long periods of time. Back in Neptune, she works alongside her father Keith (Enrico Colantoni), who is aging and dealing with concerning health issues (some of which are leftover from the movie’s car accident), and debating how much longer he can stay in the P.I. business. There are more familiar faces: Best friend Wallace (Percy Daggs III) is now working at Neptune High, endearing asshole Dick (Ryan Hansen) is around still being Dick, and Weevil (Francis Capra) is always a welcome presence but, once again, gets saddled with a lackluster arc.

The big mystery that runs throughout the whole season is about a serial bomber in Neptune who is murdering spring breakers. The first bomb targets a seaside motel, killing several notable people in the process, and thrusts Veronica (and her father) into a larger mystery arc that, sadly, bores more than it enthralls. It starts off intriguing but this wears off as the episodes go on—it’s a shame that a show so built on mysteries and noir instincts has crafted a whodunnit where, well, you don’t actually care whodidit. (More than anything, it made me miss the fun episodic mysteries that filled out the longer arc during those early seasons).

The mystery introduces Veronica to a bunch of new characters, such as a true crime–obsessed pizza delivery guy Penn Epner (Patton Oswalt) who has his own murderinos-esque group, badass bar owner Nicole (Kirby Howell-Baptiste) who becomes a potential new friend for lone wolf Veronica, and Alonzo (Clifton Collins Jr.), one-half of a hitmen duo working for a Mexican cartel. (Though perhaps the less said about the boring and stereotypical cartel plot, which ultimately feels pointless, the better.)

There is a definite bright spot found in Matty (Izabela Vidovic), a teenage girl who loses a family member and is set on finding out who the bomber is. She’s a mini-Veronica; intelligent, fearless and determined, and she fits into the world well as Veronica’s protege. There is a nice rapport between them—and with Keith, too—which allows Veronica to see herself as we once saw her, and also highlights Veronica’s protective instincts. If there is one person that’s easy to root for this time around, it’s Matty. (The other, as always, is Keith who remains the rock of the series even though his plot also, unfortunately, falls a bit flat.)

Then there’s Logan. Always a toxic relationship, I went in to this new season concerned that Veronica/Logan have run their course and was bummed that feeling never went away. It does provide an interesting look at their relationship and what happens when one person changes—Logan is working on himself in therapy, more introspective, and less inclined to spontaneously throw punches—while the other is mostly the same, resistant to changes in both herself and her partner. In an early episode, Veronica is frustrated by Logan’s new gentle ways and basically goads him into violence; when he gives in, the resulting sex is clearly much better for her than for him. (Although Hulu didn’t allow much swearing in the series, they did allow far racier sex scenes than before.) Though I disliked this particular scene, I was still game to see the series deepen this conflict, but it never quite interrogated this dynamic like it should have. That’s another big problem here: Veronica Mars keeps stumbling into these gripping scenarios, especially when it comes to interpersonal relationships and the desire to stay unchanged, but then it cautiously backs away—largely to return focus to the bomb plot which, again, is the least appealing element of the series. (Another oddity: It’s so weird to feel more on Logan’s side than Veronica’s!)

Veronica Mars has always thrived because of Veronica herself. Bell falls back into role with a natural ease, all sarcasm and quips and teen-drama-tinted-edginess. Bell’s performance is an anchor, so this reunion is immediately delightful, but eventually becomes disappointing. Veronica Mars wants to show that Veronica has grown up while still clinging to the past but, simultaneously, the writers don’t want to do the actual work to explore it. Veronica has never been perfect, which is what works, but this season is the first time I’ve been actively annoyed—and, once or twice, actually angry—by the character’s decisions.

The way Veronica talks to Weevil, who is sort of an on-again/off-again ally, feels less like her usual hardshell protective nature but more shitty and blatantly offensive. In fact the whole way the writers handled Weevil (who should be a fantastic character and especially with Capra behind him) felt gross, especially after how they did him dirty with a messed-up storyline in the movie. Veronica Mars has always had a problem with its Latinx characters, preferring to give Neptune’s white population depth and personalities while the Latinx folks are relegated to tired stereotypes as “gangbangers,” “hoodlums,” and bikers with secret hearts of gold. It’s a shame to see Veronica herself buy into them. This season, they seem to have doubled-down with the microaggressions, which is frustrating considering they’ve had a whole 15 years to get smarter, and it’s so off-putting that I’m hesitant to ever revisit the first three seasons to see what my teenage self originally brushed off.

Veronica Mars does fare better than most series that have been brought back to life. But, like the majority of them, it feels like a shell of itself or like a rookie spec script. The pieces are there, but rather than having been patiently put together, they’ve instead been shoved in to fit wherever, regardless of how the finished product comes across. The episodes lack the distinct shine that made us fans in the first place. But it’s easier to focus on the bad parties—it should be said that it’s still full of wonderful performances, hints at greatness that help sail things forward, and small, lovely character moments. Sometimes, it feels similar to returning back to a cozy home after a stressful vacation—but after a few days, you’re itching to leave again. 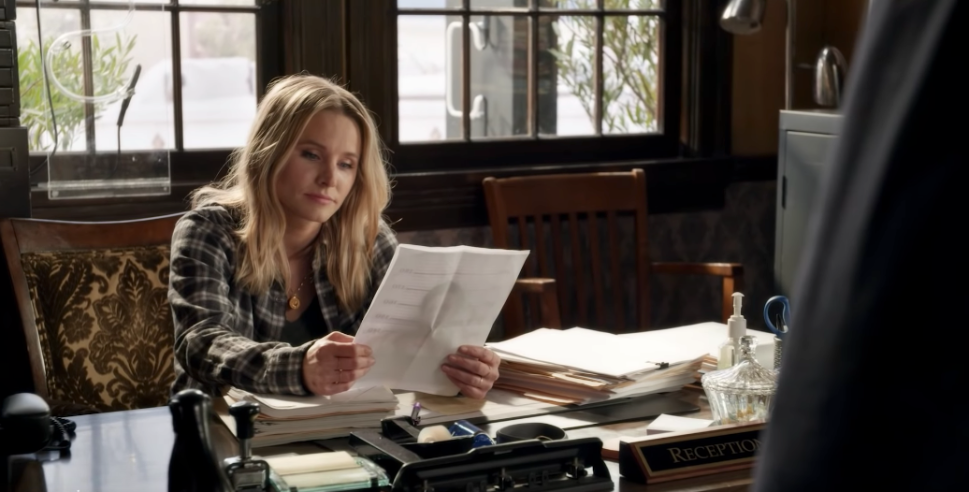