Think of this—on Sunday, the women’s U.S. soccer team beat the Netherlands in a 2-0 final match to clinch the FIFA World Cup. How many times has the team won the most prestigious event in soccer?

No, Team USA has won the World Cup title an astonishing four times! That places the U.S. women’s team as the most successful Women’s World Cup team… in history.

The U.S. team is also one of only seven nations to play in every World Cup since the Women’s World Cup started in 1991. Not impressive enough? Well, the final match on Sunday was in front of a sold-out crowd of 57,900 at Stade de Lyon in France. Plus, over the past three years, the U.S. women’s soccer games have generated more revenue than the U.S. men’s team. Between 2016 to 2018, the women’s team generated $50.8 million, while the men’s team generated $49.9 million.

No biggie, right…? Well, it wouldn’t be if the two U.S. teams were paid the same.

Overall, the average base salary of a member of the women’s team is roughly $30,000 and 38 percent less than a male player’s income.

But not only was it an exciting moment when the U.S. women’s team clenched their fourth World Cup title on Sunday, but it was also monumental when the exuberant crowd went from cheering to chanting: “Equal pay! Equal pay!”

So again, let’s recap: the U.S. women’s soccer team has racked up far more wins, generates more money and has far larger attendance numbers than the men’s national team. The men’s team didn’t even qualify for the 2018 World Cup; the highest the team has ever placed is reaching the semi-finals of the 1930 World Cup.

And, on the very same day the women’s team won the World Cup, the men’s national team was in the finals of the Gold Cup, a major international soccer tournament, where the team ended up losing 1-0 to Mexico.

You probably didn’t even know that was even going on.

Rep. Alexandria Ocasio-Cortez gave her take on the pay controversy on Sunday by tweeting: “At this point we shouldn’t even be asking for #EqualPay for the #USWMNT – we should demand they be paid at least twice as much.”

At this point we shouldn’t even be asking for #EqualPay for the #USWMNT – we should demand they be paid at least twice as much 😉 https://t.co/VXITg24UB3

So, looking at the results of the World Cup and the Gold Cup, not only should the women’s team be paid more, but it looks like they should also be training the men’s team.

As former President Barack Obama said to the 2015 championship team: “‘Playing like a girl’ means you’re a badass.” 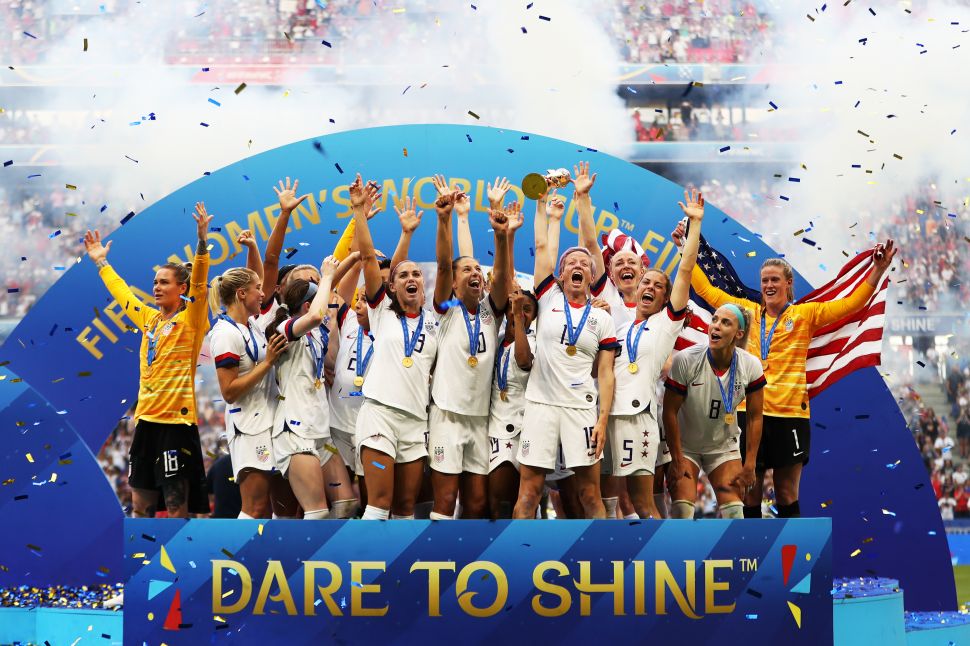