Gerard Butler’s U.S. Secret Service Agent Mike Banning is in rough shape at the start of Angel Has Fallen. He’s got a sore shoulder, a couple of compressed vertebrae, and a case of tinnitus that rivals Pete Townsend’s. It’s all led to an increasing dependence on painkillers that he keeps secret from his wife (Piper Perabo, taking over duties from Radha Mitchell) and his boss, the President of the United States (Morgan Freeman).

But as weary as Banning might be, if you believe the Tomatometer scores of the previous two installments of the action saga we now call the “Fallen Trilogy,” he is still doing better than a film critic who has had to review all three. Many seem incredulous that these examples of what has been called “terror exploitation” are still alive and kicking—unlike, say, any Secret Service agent who has the misfortune to pull a shift with Mike Banning.

SEE ALSO: Cate Blanchett’s ‘Where’d You Go, Bernadette’ Performance Is Her Most Affected to Date

But when you remove Angel Has Fallen from the context of the previous films and take into account Mike’s battered state and that he spends much of the film wrongly accused of masterminding an assassination attempt on the president, what you have is a noir for our age of technological paranoia and all-encompassing militarism.

Like the first film, Angel holds you in its tight and often illogical grip. At once, it numbs you with its onslaught of body-disintegrating explosions and kill shots while stoking your fears about military-industrial conspiracies and evil infiltrating the government at the highest level. It is a doom-invoking, cathartic and strangely satisfying head-trip that’s also a bit ridiculous.

Directed by one-time stuntman Ric Roman Waugh—also a co-writer on the script—Angel Has Fallen shows us a world where militarism and a militaristic stance has informed every aspect of both the natural order and the social compact.

That apparent cloud of bats swarming over the lake where the president is fishing? It’s actually a collection of tiny drones that can identify who you are before blowing you to smithereens, as it does to Banning’s 15-man security crew. A stop at gas station turns into a run-in with truckers who have dubbed themselves a militia and tote military-style guns but have no clue how to use them.

Even a respite at an off-the-grid West Virginia cabin that is home to Banning’s estranged father Clay (played by a delightfully game Nick Nolte) reveals a structure with both state-of-the-art surveillance and a complicated warren of tunnels. It’s also wired with enough explosives to topple a small village, implying a world where a woods-bound recluse could purchase that much destruction as easily as he could buy milk.

When the explosives are detonated at the hands of the seemingly doddering Nolte, the audience laughed—an indication that it was meant to be one of the film’s few jokes. This is a movie that speaks more eloquently in explosives than it does words.

In the eye of it all is Butler, who is sturdy and generic; he’s like a movie star you could pick up at a big box store alongside a two-month supply of paper towels. Mainly, he’s wise enough to let the action do most of the work for him. The inclusion of Freeman and especially Nolte (it’s a shame their characters never get to meet) helps imbue the film with a world-weary twinkle and soulfulness that these kinds of movies rarely achieve.

Angel Has Fallen doesn’t explore its “wrong man” concept as deeply as it should. Despite being pursued by every branch of military and law enforcement, led by an FBI agent played by a comically stern Jada Pinkett Smith, Banning never has to use his lethal skills against the good guys. However, driving a fully freighted semi, he does lead some local cops on a car chase through a forest at night, a pleasingly arboreal twist on typical Fast & Furious style fuel-injected shenanigans.

While Angel Has Fallen is definitely one of those movies that would prefer you to turn off your brain and submit to it, it still gives anyone willing to engage with it a lot to think about and consider.

We are nearly 18 years into a war in Afghanistan that two presidents on opposite ends of the political spectrum have pledged to end to no avail. In its own pulpy way, Angel Has Fallen demonstrates the cost of that involvement—from the constant churn of death-creating military technology to the personal cost of PTSD among veterans—in a more trenchant manner than the news media tasked with covering it typically does.

It is a strange new world and it’s starting to take toll on all of us—not just Mike Banning. 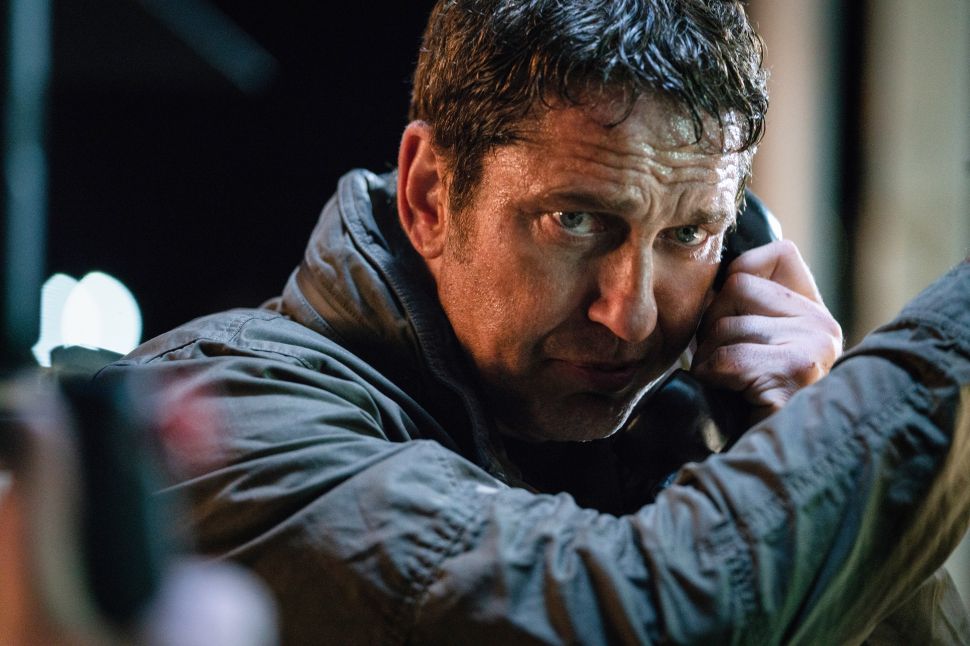