Not too long ago, I had a team of art handlers working for me that was made up of an interesting duo: they were brothers. Not only did they provide excellent client services, but rich entertainment as well. One of the brothers had pitched the idea of a reality show to a producer who then contacted me about the feasibility of filming while the duo was on the road. After consulting my friend and attorney, I gave the bad news to the film company. If they wanted to make a deal, they would need to buy my company from me, because for sure, the day after airing, I’d lose one client after another. This experience reminded me of some of the more regrettable moments I had on the road as an art handler before launching my own company, Atelier 4, and how sometimes it’s the fuck-ups that make for the best teachers.

I was 23 years old when my best friend called me with a job listing he had just seen with my name all over it. Cross country driver for an independent art handling company. I badgered the owner and his dispatcher for a month until finally scoring an audition. After shadowing one of their lead drivers—a Vietnam veteran who returned after his tour to be a freelance photo journalist—I was given my first assignment: Drive to Amarillo, Texas, to meet the California-based truck and swap vehicles for the return east. With stops in D.C., Pittsburgh, Cleveland, Chicago, St. Louis, Kansas City, Tulsa and Dallas, my maiden journey was about 10 days until the meet-up on Interstate 40, outside of the Big Texan (“eat a 72 oz. steak in under an hour and it’s free”). Much of what I learned while working for this company informed my decisions as the founder of my company. In short, what not to do.

When I left New York, I already had a half full truck load, some of it bound for a corporate collection in St. Louis. After leaving Chicago, I had a look at the manifest and bills of lading for my next few stops and after doing a visual check on the back of the truck, noticed I was one object shy of a completed shipment. The truck was really full, and I felt that it had to be in there. I was the only one on the truck handling objects since leaving New York. I stopped outside of St. Louis in Belleville, Ill., where a childhood friend was living while finishing her obligations to the air force for her ROTC-assisted education. I took the truck apart, leaning works against the side, spreading out crates and cartons on my friend’s lawn. The missing work, which I deduced was a Jasper Johns work on paper (this was 1987, hazard a guess at the value?), was starting to freak me out. I called the dispatcher. He told me that I had a problem. Ya think?

The next morning I pulled into the loading dock of a colossal commercial high-rise in downtown St. Louis. I took the works I did have in my possession along with my paperwork to the office housing the collection. I didn’t know what to say, but after placing the works against the wall of a conference room, I handed the bill of lading to the representative. She didn’t even look at the line items and promptly signed as consignee and checked all in good order.

Assuming this was the end of a very short career, I went down to the truck and started pulling works for the next drop in Kansas City. My heart began to race as over and over again, I counted one too many pieces. The dock had a strong lamp that I was able to shine inside the truck. I looked at each object, with its corresponding Sharpie marked tag, and awareness began to lift my spirits when I discovered what had happened. The bill for the delivery I had just made listed a Johns work of a certain size. This object in front of me was a different size, but the reference number on the label was similar to the number on the Johns shipment, off by one digit.

I unpacked the work, and there it was, the missing Johns, quite a bit larger than what it was listed as, but the same title. The heady feeling of elation, dizzy on my way up the elevator, was not shared by the company rep that I tracked down to tell, “Sorry, one more piece….” Subsequently, I made it a policy when I launched Atelier 4 that there always had to be at least two art handlers on a truck. This is not only for security reasons, but also, have you ever tried to lift a 7-by-9 foot, foam-packed, framed painting that’s made from heavy impasto? Not only are two heads better than one in keeping track of your cargo, but four strong arms are better than two for getting it safely from place to place. When your partner on the road is a friend, or even brother, the comic relief is just an added bonus. 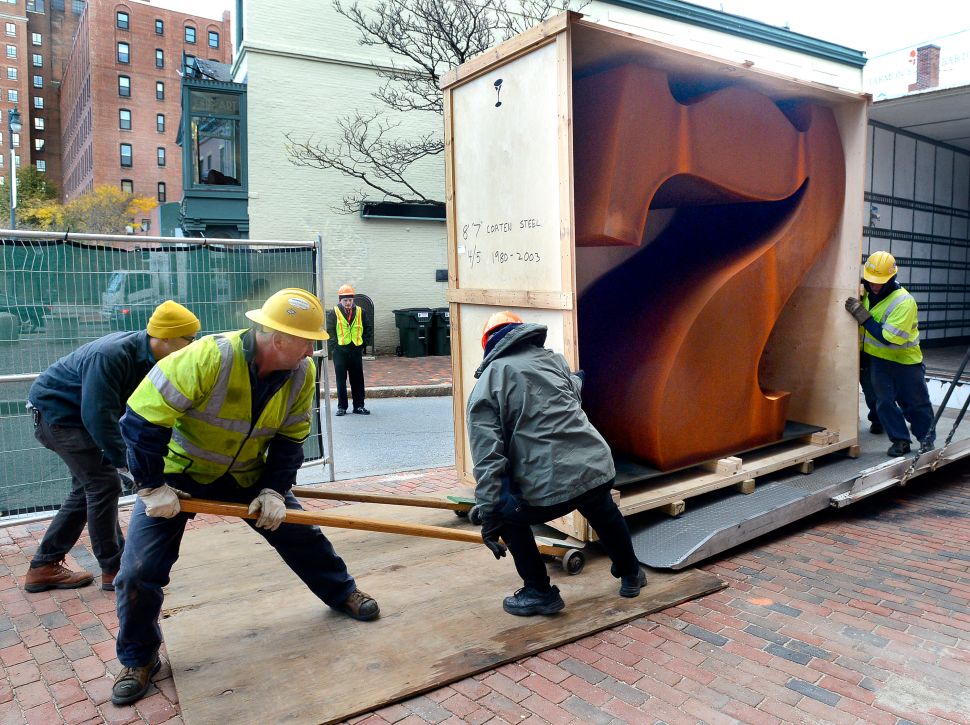