To run alongside the weaponry event, the art exhibition “Art the Arms Fair” will return for its second edition to raise awareness of the consequences of the fair and protest the U.K. government’s complicity in the global arms trade, particularly with how limited public awareness is of arms deals being struck right in London. The protest exhibition will be held from September 3 to September 13 at Maverick Projects in Peckham, on the opposite side of the river where DSEI will take place.

For the inaugural edition of Art the Arms Fair in 2017, Banksy contributed a piece depicting the devastating effects of a drone attack titled Civilian Drone Strike, 2017. In total, the auction raised around £250,000. £205,000 was raised from Banksy’s work alone.

This year, over 200 artists will contribute pieces, among them a couple of repeating artists like satirical artist Darren Cullen and Yemeni graphic artist Ahmed Jahaf, whose works draw attention to the U.K.’s problematic role in supplying weapons to Saudi Arabia used in airstrikes in Yemen. A new contribution by the iconic video artist Hito Steyerl will add an important feminist context to this year’s exhibition, and sketches by Jill Gibbons, made at an actual DSEI fair, call attention to the idiosyncrasy of arms dealers enjoying the performance of a string quartet and complimentary champagne at the world’s leading arms convention.

Last summer, when London’s Design Museum held an event for a global arms company, several artists called for their works to be removed from the concurrent exhibition, “Hope to Nope: Graphics and Politics 2008-2018.” A number of them—including Shepard Fairey, the artist behind the iconic “Hope” poster for Obama’s 2008 campaign, anonymous feminist art collective Guerrilla Girls, and political protest poster artist Peter Kennard—have also donated pieces to the upcoming edition of Art the Arms Fair.

As with the first edition of the fair, all proceeds from sales will be split between the non-profit Campaign Against Arms Trade (CAAT) and Reprieve, an NGO that campaigns against human rights abuses. 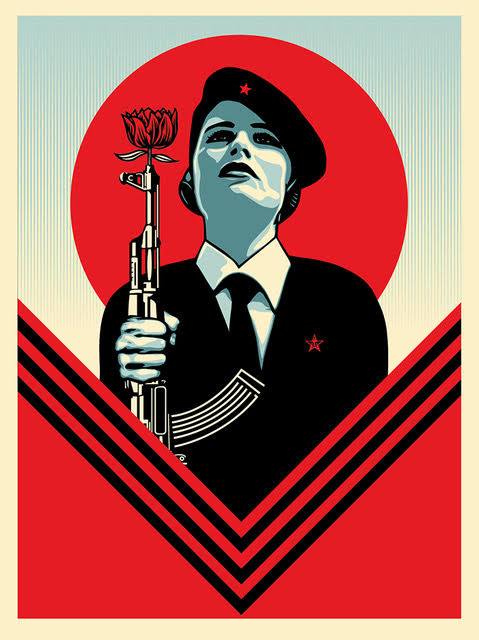