Did you hear about the author accused of insulting the audience’s intelligence? “That’s impossible,” she sniffed. “They haven’t got any.” I could make the same snide remark about crowds at the proudly idiotic, maniacally staged jukebox musical Bat Out of Hell, scored to bombastic, big-haired spam rock by Jim Steinman and first wailed into immortality by Meat Loaf. But then, I was one of those nostalgia-triggered morons at New York City Center, bobbing my head and bouncing in my seat to a string of enduring, if embarrassing, FM classics.

At least, I was for the first act. At two hours and 40 minutes, Bat Out of Hell is like a lot of Steinman songs: too long, too repetitive, and too dopey to sustain the buzz. And yet! Steinman seemed to know what Wagner knew: No matter how laughable your source material, if you crank it up, cram in a ton of background noise, and double down on adolescent angst, some will call it art. Or millions will buy the LP. Thus, for decades, Steinman has been crowned as a master of “rock opera,” although to rank Bat Out of Hell with Tommy or The Wall is like doing a shot-by-shot comparison of a pretty decent episode of The A-Team and Apocalypse Now.

Is Bat Out of Hell fun? Yes!—surprisingly often. This can be credited to fearless and big-lunged performances by four talented leads; tireless dance and vocal support from the young, diverse ensemble; and director Jay Scheib’s Schaubühne-meets-Barclays-Center mise en scène that’s best described as a mix of sense-battering, trashy spectacle and sophisticated live video. Is Bat Out of Hell boring? Yes!—whenever the actors stop amassing vocal nodes from the bellow-heavy score and deliver Steinman’s leaden book scenes, your heart sinks.

Since the musical’s basic premise has loopy potential, I dearly wish Steinman had brought an actual playwright on board. The basics: We’re in a post-apocalyptic future America, where “Chemical Wars” have left some citizens mutated, biologically halted at age 18. These so-called “freezers” live on the outskirts of town, riding bikes, wearing leather, and breaking into sharp-elbowed dance. Strat (Andrew Polec) is leader of a gang called “The Lost.” Strat has eyes for Raven (Christina Bennington), daughter of the amoral plutocrat Falco (Bradley Dean) and his wife, the disillusioned, sozzled Sloane (Lena Hall), who live in a guarded high-rise. (I don’t know if the villain’s named Falco due to a private Steinman beef with the singer of the 1985 hit “Rock Me Amadeus,” but let’s start a rumor.) As you can see, the plot is a goulash of elements from Peter Pan, West Side Story, Threepenny Opera and any dystopian biker flick.

The score—which could be lightened by cutting five or six extraneous numbers—includes the ones you expect: “All Revved Up with No Place to Go,” “Heaven Can Wait,” “Two Out of Three Ain’t Bad,” “You Took the Words Right Out of My Mouth” and more. And more. Much more. After two hours, standard Steinman songcraft—take trite idiomatic expression, howl it for six minutes while power-blending Phil Spektor and Bruce Springsteen—becomes very tiresome.

Nevertheless, I’ve never seen a cast work so passionately on such silly material. Polec, as the often shirtless, mike-twirling rock Adonis, has a wild comic energy that goes a long way to mitigate Strat’s sexually predatory, Manson-ish impulses. Eyes agog, breaking into boyish giggles, Polec’s Strat seems like a bizarre but perfect combination of Peter Frampton and Rik Mayall of The Young Ones. Petite powerhouse Bennington makes Raven’s journey from spoiled brat to sexually confident rebel both credible and empowering—and she (plus woke directorial touches by Scheib) helps curb some of Steinman’s phallocentric excess. Hall’s Sloane is delectably louche and my god, the pipes on that woman. When she and swaggering Dean duet on the epic ballad of teens hooking up in the backseat, “Paradise by the Dashboard Light,” you feel like they are vocalizing the primal yawp of adolescent lust. Scheib ends the number with a disgusted Raven tearing the motor block out of the car and hurling it into the orchestra. For that cartoonish gesture, I am ready to forgive Steinman for Dance of the Vampires.

I’m making it sound fun, but after intermission, the goodwill wears off pretty fast. Yes, the pulp visuals are brutally (often blindingly) effective and the most successful numbers—the smashingly violent opening number, the desperate first-act finale (“Bat Out of Hell”), and a tender, video-haunted romantic scene for Strat and Raven (“Making Love Out of Nothing at All”)—are high points of design and tone. But the second act lumbers on and on, no matter how hard the actors and director work. The title phrase, one of those banal sayings that inspire Steinman, implies exceptional speed and purpose. Ironically, those are the crucial elements lacking as gasless sports cars and motorbikes sputter to a halt in the dusty, midnight road. 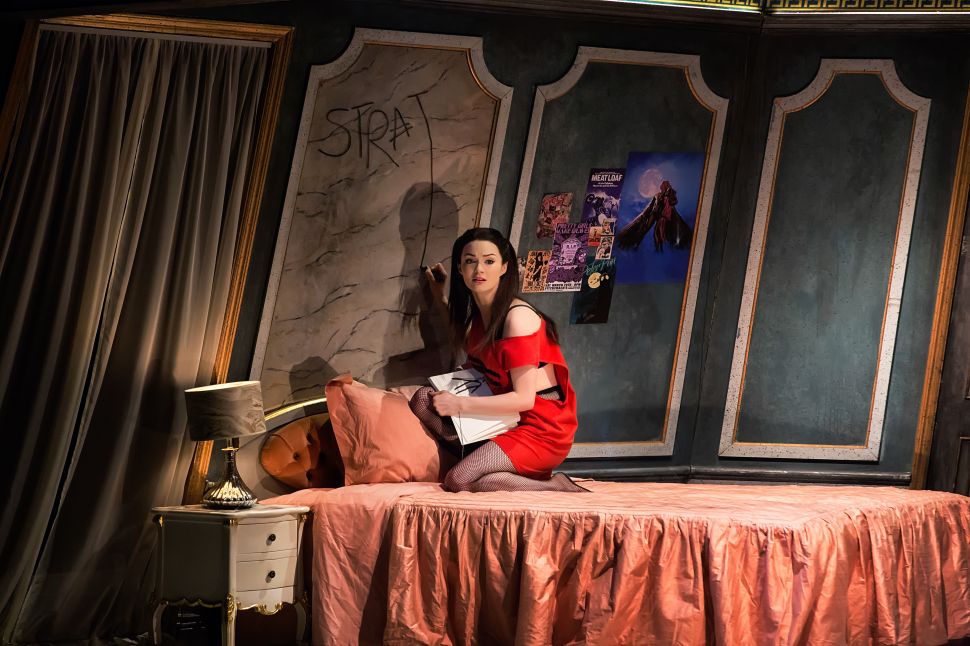