Nearly two years ago, in the wake of the deadly mass shootings in Las Vegas and the Sutherland Springs church in Texas, Thomas Heston, a public health professor at Washington State University, wondered how the latest technology could do in reducing firearm-related injuries. In November 2017, he drafted a white paper titled A Blockchain Solution to Gun Control, which discussed the possible use cases of blockchain in regulating firearms purchase and usage tracking.

Since then, after a full cycle of Bitcoin’s boom and bust diminished the blockchain buzz, no one seemed to remember this emerging technology after the recent tragic shootings in El Paso and Dayton rattled America, although academics and industry players have continued to make progress.

SEE ALSO: Blockchain Could Save Governments From Cyber Attacks

“The ‘news’ over the last couple of years is that Bitcoin still hasn’t been hacked is spite of a market cap of over $200 billion. This is a huge bounty, and yet nobody has been able to hack Bitcoin. This shows that we can say with great certainty that a blockchain-based gun registry would be secure and able to ensure privacy,” Heston told Observer this week.

In his 2017 paper, which was published in the International Journal of Scientific Research in March 2018, Heston proposed the idea of a blockchain-powered electronic gun safe, which would store and track information of individuals who own or plan to purchase firearms. When a person sells a gun to another person, meaning that the gun is moved from one safe to another, the transaction would be recorded on a blockchain that’s immune to hacking and editing.

Such measures could fix loopholes in the FBI’s existing background check system, Heston said. Per the federal agency’s own estimate in 2017, the National Instant Criminal Background Check System (NICS) used to screen firearm purchasers missed thousands of instances of criminal record, mental illness and other non-qualifiers that would have barred certain individuals from buying a gun. The FBI cited voluntary submissions and differing state laws on criminal and mental health adjudications as the main challenges in identifying non-qualifiers.

These issues could be resolved if there was a one-stop-for-all database that accurately tracks the information of every gun purchaser in the U.S. Such a database could also help gun owners ensure safe ownership while retaining privacy.

“The 50 states in the U.S. all have different gun laws. Many people who own firearms are not up to date with gun laws: where should I keep my guns while at home, in the car, or during travels? Blockchain allows gun owners to connect all that gun usage information to third-party services that tell them how to abide to relevant laws while not having to worry about this information being seen by anyone,” Duane Jacobsen, CEO of Blocksafe, an Atlanta-based company that makes blockchain applications for firearms tracking, told Observer.

Blocksafe’s apps function as add-ons for firearm manufacturers to track their inventory and distribution. Since 2017, the company has scored seven industry partners, three of which are directly related to firearms.

Still, very few people—in the firearms industry, as well as on the lawmaking side—are aware of the potential benefits of blockchain, Jacobsen said.

“Details can be worked out. We just need to get politicians to soften partisan ideas, which aren’t working, and embrace  technology,” Heston explained. “Blockchain tech provides privacy, security and a reliable database that researchers can use to figure out workable improvements to our current dysfunctional and dangerous system. Researchers need a good database to start treating this as a public health issue. Give them the tools they need!” 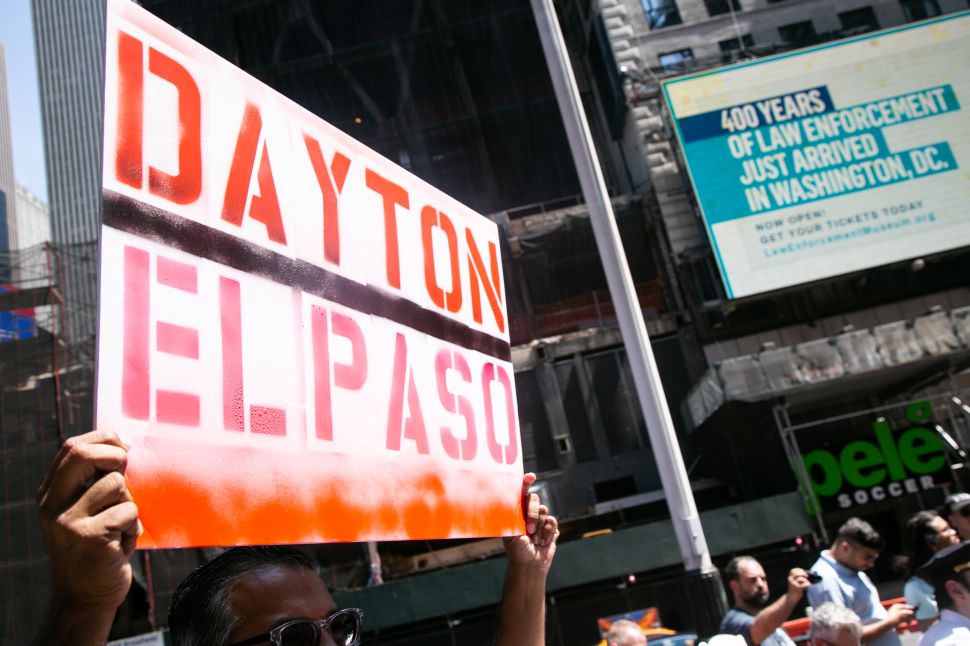