There’s no shortage of fascinatingly complex characters on Netflix’s Emmy-winning wrestling dramedy, GLOW. But among the wannabe actresses, wolf-girls and washed up B-movie directors, Chris Lowell’s billionaire producer Bash Howard has emerged as more than just the cocky man-child he appeared to be in Season 1.

Last season saw the real world begin to puncture Bash’s happy-go-lucky, privileged bubble when his close friend and live-in assistant Florian died of AIDS. Though the show has never explicitly addressed Bash’s sexuality, the implication was clear: Florian’s death forced him to confront things about himself that Bash simply couldn’t handle. That, in turn, drove him headlong into a green card marriage with British wrestler Rhonda (Kate Nash). Cut to the unlikely couple’s honeymoon in Vegas, where the Gorgeous Ladies of Wrestling have set up shop doing the floor show at a hotel and casino on the strip.

SEE ALSO: ‘The OA’ May Be Canceled, but Few TV Shows Can Claim the Same Social Impact

“I think Rhonda and Bash are both in shock about what they’ve done,” Lowell told Observer.com earlier this week. Ahead of GLOW’s third season premiere, we chatted with Lowell about his character’s stunning lack of self-reflection, how exactly we should think about Bash’s sexuality and just how much hairspray it takes to achieve his totally ’80s bouffant.

Observer: How does the Bash that we know now compare to the character we met in Season 1?
Chris Lowell: Bash, in Season 1, still hadn’t pulled the curtain back on his life. When we first meet him, he’s just this fun-loving, wealthy playboy with not a worry in the world. And I think as the show progresses, as he—and the other characters—start to get these things that they always thought they wanted, it starts to become evident to all of them that maybe there’s more that they want and maybe they’ve been pursuing the wrong things. I think Bash has been faced with some very difficult questions about himself and what matters to him. At the end of Season 2, rather than looking at those questions, he runs away from them.

What is so interesting to me about Bash is that we as an audience don’t really know that much more about him than he presents to the other characters in the show.
Yes. [Series creators Liz Flahive and Carly Mensch] and I talked about this quite a bit. I think a big part of that is he doesn’t know much more than what he’s presenting either. I don’t think he’s got a secret that he’s figured out that nobody else has. I think he’s as uncertain about what’s going on underneath as anybody else. Which I think is so fun to watch. It’s fun to watch him learn it in real-time. Because he’s sort of asking himself these questions for the first time, I don’t think the answers are ever that clear. His world is turned so upside down by some of the things that have happened that he’s equally as lost.

What’s his own understanding of himself and his sexuality? Do you consider him a closeted gay guy? Or is it more complicated?
I remember, one of my best friends when he came out—I wouldn’t even say he came out. He’d had his first romantic relationship with another man, and I remember saying to him, “How long have you known that you’re gay?” And he was like, “Well, I’m not gay. And I still want a wife and kids and a house and a yard.” I just remember watching him grapple with a version of himself that maybe he pictured when he was younger and a version that he was becoming. I think it would be a disservice [for Bash] to have the answers be so crystal clear so quickly—especially at a time when the AIDS crisis was exploding.

One of the things about this season being set in Vegas that I didn’t expect and was so moved by was the level of homophobia that existed at that time, nationwide but also in Vegas, of all places. Vegas is the city of anything-goes. But Liberace was in the closet, for Christ’s sake! That’s something that we really explore this season.

GLOW, of course, is based on a real women’s wrestling show from the ’80s. Is there a real-life producer that Bash is based on?
The original host of GLOW was a guy named David McLane, who was a big inspiration for me personally. The purity with which he loves the job and the sport is so clear when you watch old episodes, and that was something that I really liked for this character. It’s a combination of him and this guy in Vegas who was the money person behind the show. In terms of whether either of those guys were part of the LGBTQ community, I have no idea. That I think is creative license.

At the end of Season 2, Bash makes this really impulsive decision to marry Rhonda. What’s their relationship like in Season 3? Do you think she has any clue what’s going on with him?
I think Rhonda and Bash are both in shock about what they’ve done and are working as hard as possible to put on a good face. They’re strangers at the beginning of Season 3 and by the end of the season there is such a deep, genuine love between them that is so uncommon. I don’t know that I’ve seen it much in any medium. It’s a very specific relationship that they have, and a very specific kind of love. But by the end of the season you see how much they’ve come to respect and appreciate and want the best for each other. I think Kate [Nash] and I both were surprised by how moving it became for both of us. That’s a very unique and dynamic relationship that I don’t think any of us expected to grow the way that it did over the course of the season.

How does the fact that he and Rhonda are married affect their relationships with the other wrestlers?
Bash is still remarkably tone-deaf when it comes to how he speaks to and works with women. There’s part of him that’s still, like, Quiet down, sweetie, the grown-ups are talking. He still, at the end of the day, thinks that this is his show paid for with his money. which makes everything his decision. I don’t think there’s any part of him that thinks twice about that. I think it’s actually more complicated for Rhonda, who has to, when Bash leaves, be in a room full of disgruntled co-workers who are upset with the way that they’re being treated. She’s stuck in the middle.

What’s the dynamic like this season between him and Sam and Debbie, who are also producers?
He admires Sam, Mark’s character. So, when Sam talks, he listens. But Debbie is someone who I think he was pissed off to find out was a producer in the first place. That obviously presents an enormous hurdle for Debbie, who has to get what she deserves by going through Bash. Also, Debbie is such an adult and Bash is still such a kid. So, not only does she have to deal with this very boys-club world, but she literally has to navigate dealing with a man-child—two of them! Sam and Bash are both such victims of arrested development. Neither of them have had to grow up, so Debbie has to teach them why they’re being patronizing shitheads sometimes.

Since so much of what’s going on with Bash is unsaid, I’m curious about how you convey things about him physically.
The wrestlers on the show have their wrestling personas and they have the people that they are outside the ring. And Bash doesn’t necessarily put on a costume—I mean, he does, I guess. But one thing that’s fun about the show is that it goes so quickly from big, broad, fun, playful physical comedy to deeply grounded human drama. I think in terms of physicality and even my voice, I try to distinguish which world I’m in. The moments in the third season especially that you get to see a real vulnerability in him tend to be when he’s half-awake or had a few too many drinks or is caught off guard. That’s when he sort of betrays the persona that he’s putting on and you start to see an actual human being underneath it. And just as quickly he puts the flash back on and does what he thinks is a slick, sexy Vegas producer persona.

How long does it take to make your hair do that?
[Laughs] Holy shit, dude. It’s a whole process. My god! It takes about an hour. They drench it in and then they just put so much mouse in it you can’t believe it. Then they blow-dry it out and take a small little curling iron and individually curl each hair and then brush it out and then dump a can of hairspray on it. I’m the most flammable thing on set. 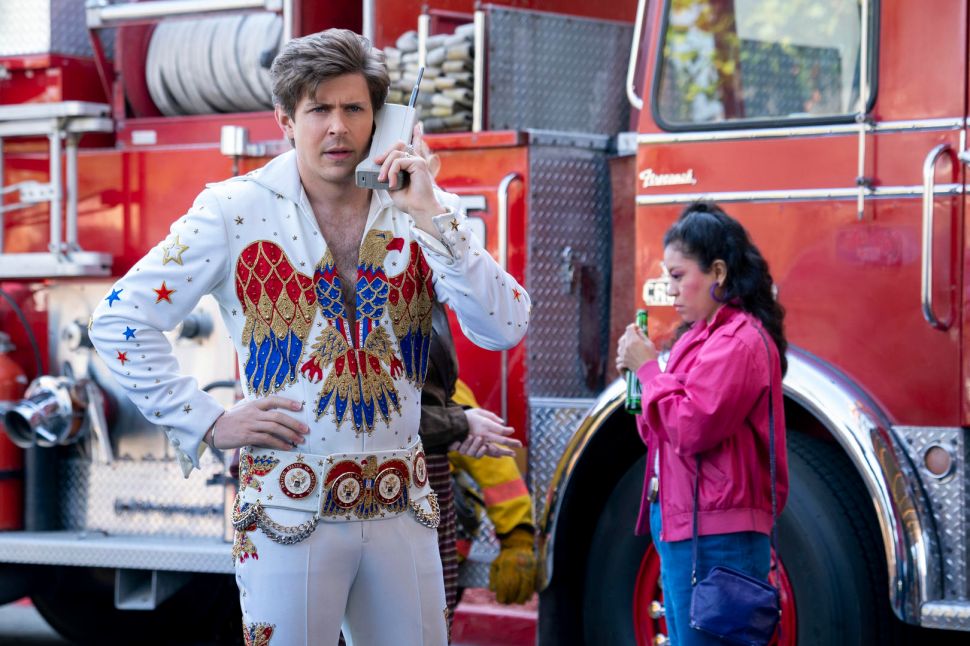