When my latest curatorial project opens at the Rubin Museum on August 16, it will run with the title “Clapping with Stones” borrowed from Afghan American artist Lida Abdul, whose enigmatic 2005 film was shot at the foot of the destroyed sixth century Bamiyan Buddha sculptures in Central Afghanistan. The Buddhas were destroyed in a barbaric act in 2001 by the Taliban, who deemed them sacrilegious and an example of anti Islamic idols. In the film, a group of men dressed in the traditional black Afghan costume of shalwar kameez clap together stones in a ritualistic pre-Islamic act of mourning, a non-conformist gesture. The film speaks to Afghanistan’s complicated history as one of the 20th century’s most famous proxy wars in which Islam and communism were pitted against each other, masking Western interests. It mirrors the current condition in Syria, which is another example of a proxy that conceals the aims of the world’s feuding superpowers.

My exhibition, “Clapping with Stones: Art & Acts of Resistance,” unites diverse artistic voices that actively upend the structures of power through active gestures of non-conformity. The exhibition focuses on bringing together histories, spaces and places that are contested, revisiting them through real and fictional narratives. It presents 10 contemporary, cross-generational artists whose poetic and non-didactic practices challenge regimes of draconian state authority and provide fresh perspectives on changing and divided societies. The exhibition explores the renewal of “culture wars,” a term that was popularized under the conservative governance of President Regan and President Bush and has recently reared its ugly head under the current sweep of global conservatism.

SEE ALSO: On the Importance of Middle Market Dealers in a Thriving Art Scene

Abdul’s film, which is presented in the exhibition, shows one method of non-conformity, meanwhile other works in the show unite to create strategies of resistance whose lineage can be traced in the United States as far back as the 19th century enslavement of African Americans. One such piece is the brand new body of work by New York-based artist Nari Ward, who has created a period room entitled Breathing Room, 2019, which brings together an array of sourced furniture consisting of a grandfather clock, tables and chairs  from the turn of the 20th century that Ward found in thrift and antique stories in and around Harlem. Upon the central table Ward has placed American history text books and above installed a surveillance mirror that functions as a tool for “double consciousness”—a term introduced by acclaimed African American author W.E.B. Du Bois. In his seminal book of sociological essays, The Souls of Black Folk, 1903, Du Bois meticulously outlines the experience for African Americans of possessing more than one social identity—one’s self, and another other that is imposed.

In addition, Ward has adorned the books and clock with a West African cosmogram symbol of a Kongolese diamond-shaped cross, by drilling holes and adding conjoined circles with copper nails. These holes refer to “breathing holes,” which resemble those that were punctured into the floor boards of the First African Baptist church in Savannah, Georgia, allowing slaves who were attempting to escape to breathe. The piece is an important component of the exhibition as it creates a fragmented jigsaw puzzle between history and memory, highlighting complex issues pertaining to race and racism. This work joins others in the show that explore the 1857 Mutiny in India, the atrocities of the second world war, the civil rights movement of the 1960s, the aftermath of 9/11 and the migrant crisis and the rise in nationalism, all of which is countered by a collective artistic narrative for rethinking and revolt.

Architecturally, the exhibition is organized as a cross circulation of converging ideas with works organized around Kimsooja’s monumental installation Lotus: Zone of Zero, 2019, an installation of 272 pink lotus flower lanterns accompanied by an ambient soundtrack that fuses together Tibetan, Gregorian and Islamic chants. Installed in the oculus of the Rubin’s sixth floor, the piece will allow audiences to reflect on a moment of harmony and coexistence, where time and space are intentionally suspended. Both site specific and site respondent, the piece serves as poetic call for peace and unity during a turbulent period of history and echoes the sentiments of the Rubin’s overarching yearly theme of Power, which is based on the Buddhist philosophy that power “begins with us and flows between us.”

Creating a forum for artistic voices, “Clapping with Stones” seek to charter new ideas, territories and artistic models for resistance. Throughout the exhibition, the idea of non-conformity is paired with a critical understanding of resistance entwining the themes of art, activism and social practice to awaken collective consciousness and responsibility.  Artists in this exhibition include: Lida Abdul, Kader Attia, Nadia Kaabi-Linke, Naiza Khan, Kimsooja, Pallavi Paul, Shahpour Pouyan, Ibrahim Quraishi, Nari Ward and Hank Willis Thomas—they come together in this exhibition to challenge contested facts and the address the roll back in civil liberties. 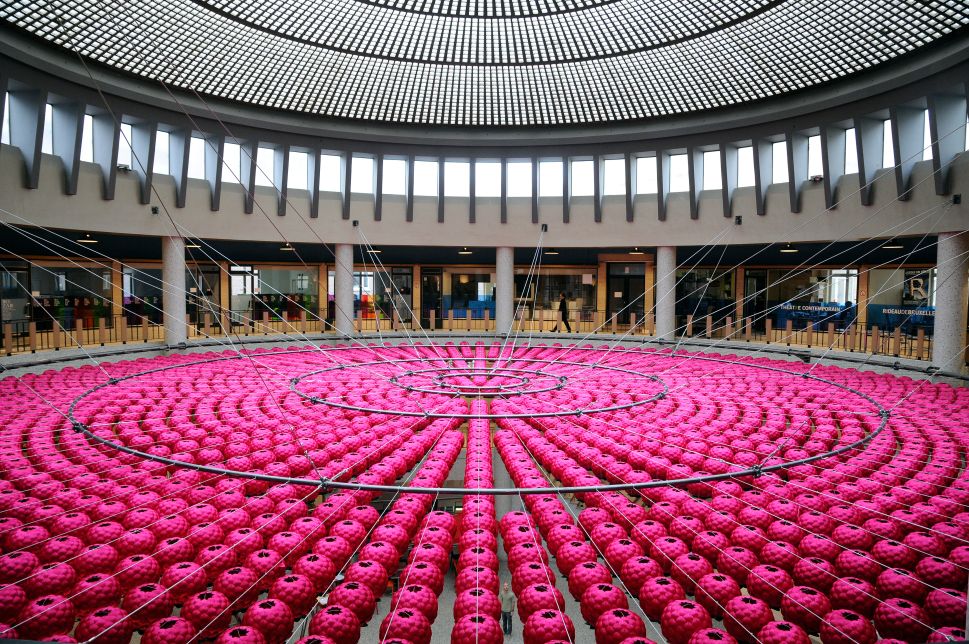