A public exhibition by artist Elle Pérez eases fall’s declining temperatures and delayed buses for New York City commuters. Inaugurating Public Art Fund’s collaboration with France-based global outdoor advertisement giant JCDecaux, 100 bus shelters have been requisitioned to exhibit works by Pérez, whose black and white photographs of friends reached wide audiences earlier this year while exhibited in the Whitney Biennial and at the Brooklyn Museum and Aperture Foundation. The project follows Public Art Fund’s installation of a Felix Gonzales Torres text piece on the Google billboard in the West Village during the Pride month, replacing advertisement with art through subtle intervention.

The citywide exhibition, called “from sun to sun,” is a deeply personal project for Pérez, who started out photographing Latinx population in the Bronx in the mid 2000s and has since joined a troupe of contemporary photographers who create intimate and vulnerable depictions of their formative communities. “I first started photographing out of a sense of obligation to preserve the memory of the artistic output of my friends in the punk scene,” explained Pérez to Observer. “I understood what I was doing as creating an archive for the future, so people would know what had been there, and that the cultural legacy of Bronx music coming from underground and grassroots scenes was alive and well, and that we were the product of that while also doing our own thing.”

SEE ALSO: This Artist’s Medium Is DNA, and Her Current Project Is a Love Virus

Various bus lines across the city—including Bx12 that the artist grew up taking as well as their current line, B38—provide impromptu encounters for commuters and pedestrians with honest depictions of the New York local’s subjects, who range from key figures of the Bronx punk scene to their own family members. Pérez (who uses gender neutral pronouns) hasn’t changed their models over the past decade; however, with their rising institutional presence in the United States and abroad, their audience has certainly grown. In fact, visibility is key for the Bronx native, who is ultimately trying to draw attention to influential figures of a community that relies on grassroots social activism for sustainability.

Among Pérez’s posers is their sister, Adriana, who teaches food and nutrition education at an elementary school and organizes its gardening program. Another subject, Brandon, is also an educator in the same borough, working towards decolonizing the education system. “Being able to include these two educators felt important in the work’s context of daily life, education being something practiced daily, and engaged specifically with understanding history while preparing for the future,” said the artist, who emphasized the project’s accessible nature after exhibiting at highbrow institutions.

Growing up, the Metropolitan Museum of Art’s pay-as-you-wish policy and local art galleries helped Pérez form their artistic sensibilities, and they hope “from sun to sun” will convey a similar path for those caught in hectic routines of urban life, rushing to arrive work on time or collect their kids from school. Whether hurried or calm, waiting is an activity commonly shared by Pérez’s viewers, anticipating the arrival of their vehicle.

“I perceive bus shelters as places for waiting but also for observation,” explained exhibition curator Katerina Stathopoulou about the implication of bus stops for city fabric. “When restricted to the immediate radius of a bus stop, we are given the opportunity to actually survey our surroundings, take a step back from the daily rush, and to process our environment.”

The images’ abrupt connections with the public fascinate Pérez, who believes the project lends itself to dialogue in both fixed and fluid capacities. Unplanned encounters with the images not only prompt breathing space for those in transit, they also bridge empathy and familiarity between lives that are not necessarily similar to one another. Pérez’s images swiftly blend into their surrounding textures and assume local rhythms that constitute a neighborhood. “I walked past a bus shelter with friends and someone had laid a mattress waiting for sanitation against the picture, blocking it,” remembers the artist. “I really enjoyed that moment because of how much the image was able to exist on the same plane as life itself.” 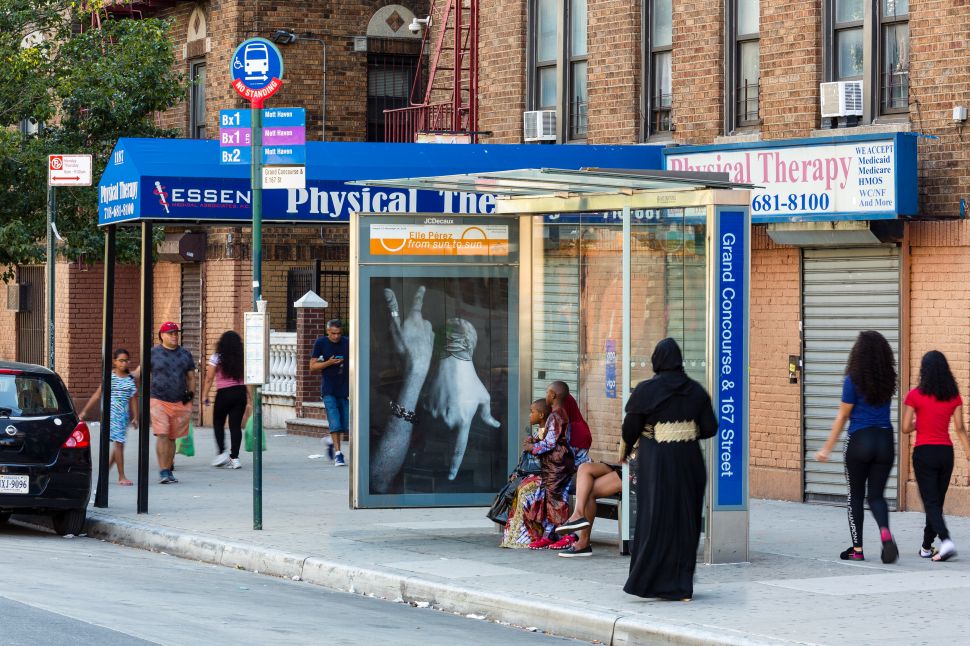