In what could be seen as an effort to repair increasingly embattled U.S.-China relations, the organizer behind a nascent tech conference in China managed to book America’s favorite car-and-rocket man, Elon Musk, and China’s most admired tech entrepreneur, Alibaba founder Jack Ma, as the headlining speakers to open the three-day World Artificial Intelligence Conference in Shanghai on Thursday.

Placed side by side in a fireside chat setting with no moderator present, Musk and Ma endured a few awkward ice-breaking moments by exchanging dry tech jokes (Ma said he’d prefer AI to stand for “Alibaba intelligence”) before they finally kicked off a lively half-hour-long debate about artificial intelligence (AI), space exploration and the future of humanity.

Both Musk and Ma have aggressive AI projects brewing at their companies, but the two business leaders are sharply divided on what this budding technology mean for the future of society.

Musk warned that AI would one day outsmart human intelligence, making most jobs pointless and posing an existential danger to the human species. “The most important mistake smart people make is that they think they’re smart. Computers are already smarter than people. We just keep moving the goalposts,” he said.

“Right now, we are already a cyborg,” Musk added, “because we are so integrated with our phones and computers. The phone is almost like an extension of yourself… But the communication bandwidth [between a person and] a phone is very low, especially input [bandwidth].” He noted that the input bandwidth to computers has actually gone down as a result of more people typing with two thumbs on phones as opposed to typing with 10 fingers on computers.

Proposing a potential solution to help humans tackle the threat of AI, Musk said there should be more companies like his neurotech startup Neuralink, which is developing a brain chip to create what he called a “high-bandwidth brain-machine interface.” (Some scientists have warned that such a device could be suicidal to the human mind.)

Ma, who doesn’t come from an engineering or science background, didn’t buy Musk’s ominous warning at all.

“My view is that computers may be clever, but human beings are much smarter,” Ma said.

“Definitely not,” Musk quickly interrupted, before Ma could continue. “It’s impossible that humans could be controlled by machines,” the Alibaba founder retorted. “They’re machines that are invented by humans.”

Ma was also not impressed with Musk’s big dream of colonizing Mars and interplanetary living. “I’m not a fan of going to Mars,” he said. “We need heroes like you [who want to go to Mars], but we need heroes like us [who will fix Earth].”

Challenging Musk’s view on AI obliterating more and more human jobs, Ma said, “Why do we need that many jobs anyway?” Quite the contrary, he argued that the onset of AI would free humans from long-hour, repetitive work to pursue more creative projects, such as art and music. And when that day comes, more—not fewer—human brains will be needed, Ma said.

That was when Musk finally heard something he could agree upon.

Indeed, no matter how Musk or Ma think AI will redefine the job market, for now they both need more human workers to help move their businesses forward. Earlier this year, employees of Ma’s Alibaba were among the leading members of an “anti-996” movement to advocate against Chinese tech companies’ “9 a.m to 9 p.m., six days a week” office culture.

Musk has faced similar backlash in the U.S. as well, with employees of Tesla and SpaceX frequently complaining about long work hours and stressful company culture on job review sites like Glassdoor.

You can watch their full debate below: 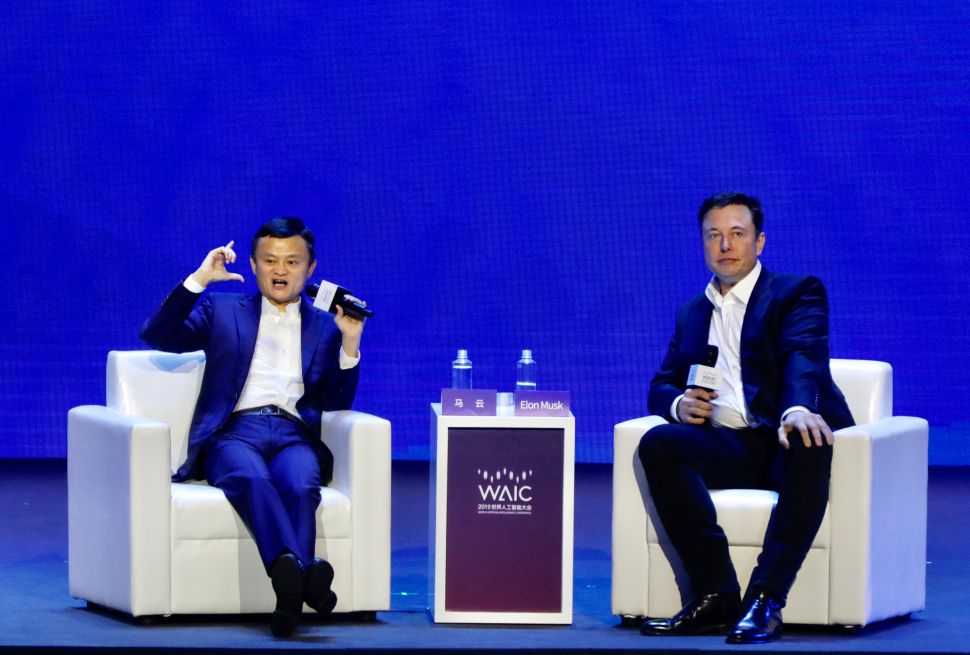