Eighteen months ago, Elon Musk’s rocket company SpaceX successfully launched its first Falcon Heavy rocket, the most powerful in the world, into space with Musk’s personal 2008 Tesla Roadster on board. To make the launch more fun, Musk put a spacesuit-clad dummy named “Starman” in the driver’s seat of the Roadster and had him listen to endless loops of David Bowie’s Space Oddity during the journey.

Since then, Starman has spent more than 550 days in outer space. According to WhereIsRoadster.com, an independent site tracking the electric car’s real-time location, the vehicle had completed its first orbit around the sun by Sunday, traveling nearly 763 million miles since last year’s launch.

“If the battery was still working, Starman has listened to Space Oddity 151,881 times since he launched,” the tracking site says. But that’s not very likely, because Tesla’s battery would only last for about 12 hours after liftoff, Musk said at the Falcon Heavy’s post-launch briefing at Kennedy Space Center last year.

The Starman’s current location is about 185 million miles from Earth, according to the tracking site. To be able to see it from here, one would need a telescope with a diameter of at least 43,823 feet.

The cherry-red Roadster was originally sent on a path toward Mars’ orbit. Because of the car’s unsterile condition, planetary scientists had worried about bacterial contamination once it crashed into the red planet, which would muddle scientific efforts to search for life on Mars.

But a later calculation by University of Toronto astrophysicist Hanno Rein estimated that the Roadster would more likely crash into Earth, Venus or the sun—in as soon as 10 million years.

As predicted by that calculation, last November, Starman passed the Mars orbit and drifted further into the solar system toward the asteroid belt.

The car is currently moving away from Earth at a speed of about 988 miles per hour, per WhereIsRoadster.com. It will fly near Mars again on October 7 next year and come relatively close to Earth every 30 years.

Rein’s study suggests that we may even get a telescopic glimpse of the Roadster within 100 years if the car flies within one Earth-moon distance.

After its third Earth flyby, the Roadster’s path will get increasingly chaotic and unpredictable due to Earth’s gravitational tug that will cause small changes in some of the car’s orbital parameters every time it comes close. 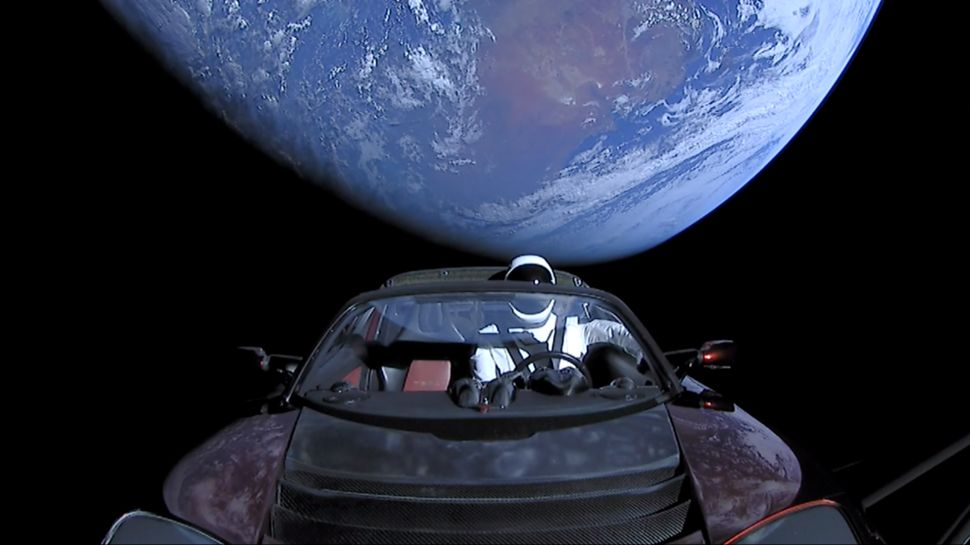