When multidisciplinary artist Heather Dewey-Hagborg collaborated with Chelsea Manning for a series of DNA-based portraits in 2017, genetic biology and fine arts were only just starting their flirtation. Probably Chelsea, which included thirty potential portraits of Manning based on cheek swabs she had mailed to Dewey-Hagborg from prison, is still one of the most striking, and cutting-edge, artistic manifestations of human reality re-rendered by technology. After this meticulous study of human face—albeit in an unconventional medium—Berlin-based Dewey-Hagborg is delving into another of art history’s darling subjects: love.

Her ongoing exhibition, “At The Temperature of My Body,” at Fridman Gallery, could be described as a chronicle of the grief, attachment and desire stages of love. The exhibition studies one of the most formative and yet indescribable phenomena of humankind, one that incited history’s bloodiest wars and most romantic poems alike. Approaching falling in love from a genomic standpoint, the artist’s investigation of desire and empathy follows a nuanced narrative that borders fiction and reality, prompting visitors to ponder the workings of the human soul and body through a subtly humorous approach.

Exhibited at the back gallery, the four-channel video installation, T3511, 2018, is about the first moment that kindles falling for the beloved, introducing Dewey-Hagborg as the protagonist of a tale on obsession and search. In the nine-minute film, she plays a biohacker who falls in love with her anonymous saliva donor through his biological data and pursues him to the clinic where he submitted his fluid. Narrated as a long form love letter, the film intertwines instinctive nature of love with metal-cold aura of a science laboratory, adding a thought-provoking twist on the impact of digital technology (think of social media and dating apps) on our emotions.

In the attachment stage, Lovesick, 2019, includes an actual love virus the artist developed at Integral Molecular in Philadelphia. The virus is presented in ten glowing pink vials, and theoretically is designed to increase the production of oxytocin, which increases feelings of empathy, monogamy or bonding. It’s the product of the artist’s residency with Integral Molecular, a Philadelphia-based vaccine and drug discovery company.

Choosing the color pink to depict love viruses was both unintentional and purposeful for the artist, who decided to work with red proteins that accidentally turned into pink in the process. Visitors, however, are forgiven for not catching the lyrics of the song that plays in the space where the viruses are displayed. “We are singing amino acids that comprise oxytocin molecule but in the rhythm of Lasso! Di Donna!” exclaimed the artist over the phone, admitting that the idea to sing molecule names over a Medieval Age Italian song with her partner came to her in a dream.

Indeed, this expansive concept is bookended by two other projects, one of which is currently realized as another exhibition at Michigan State University’s Broad Museum. Titled Spirit Molecule, the artist and her collaborator, Phillip Andrew Lewis, worked with MSU’s Departments of Biochemistry and Molecular Biology to extract the DNA from four East Lansing locals and grow genetically-engineered mosses that contain their genetic makeup. Mixed within a mountainous pile of locally-foraged moss, the “human” mosses create a sort-of alternative portrait of their human donors.

What is next for Dewey-Hagborg? During Creative Capital’s Artist Retreat at Bard College last June, the artist presented her plans for the third and final stage of her project, which plans to immerse viewers into a love induced new order, in which couples burst with love and social interaction thrives after time spent on phones has been replaced by in-person interactions and love-making. In her humorous presentation of what would happen were a love virus really to break out, the artist explained how “people will begin to cuddle and hold hands more, followed by a healthy glow noticeable on their faces.” Her envisioning for an oxytocin-induced future, which she plans to reenact with professional actors across in theatrical settings, also includes “a new dance style called tangle and piles of electronic devices thrown out to streets similar to barricades during the French Revolution.”

“At The Temperature of My Body” is on view at Fridman Gallery through August 9, 2019.

“Spirit Molecule” is on view at MSU Broad Museum through September 29, 2019. 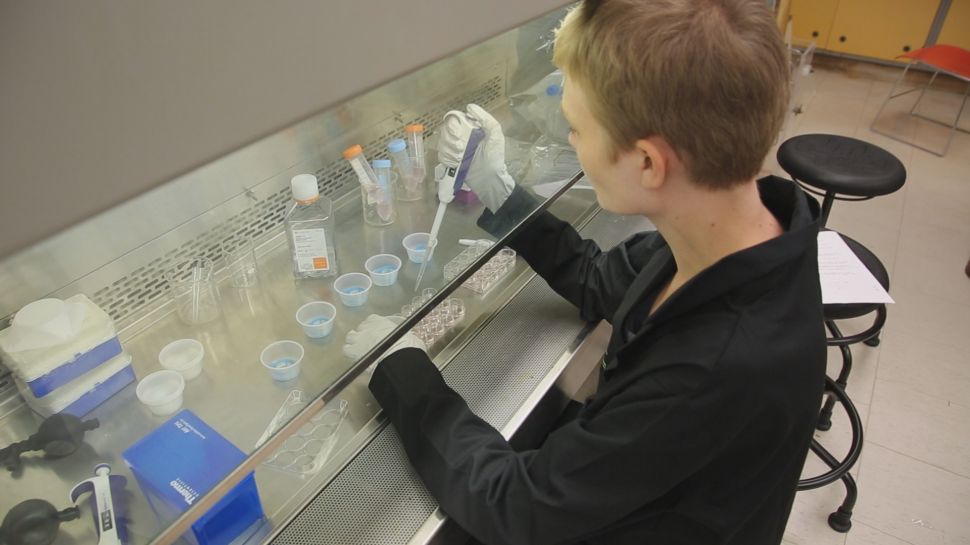