There are three major car chases in Fast & Furious Presents: Hobbs & Shaw, the double ampersanded capper to our summer of cinematic rehash.

The first takes place on the streets of London near the half-hour mark; it features a nearly $300,000 McLaren 750S sliding under a pair of trucks, followed by a motorcycle that does the same thing. The last occurs on the edge of an island in Samoa and involves a Peterbilt tow truck and a veritable daisy chain of what looks like fully customized Chevys doing land-to-air battle with a military helicopter.

SEE ALSO: ‘Luce’ Will Leave You Pondering These Murky Questions—And the Plot of the Film

These car chases deliver everything you expect from this sort of movie—chiefly the feeling of grown men playing with real life machinery the way a 10-year-old would goof around with his Matchbox cars.

But as anyone with even a passing knowledge of the franchise—now on its ninth film and first official spinoff and known the world over for its souped-up chrome and horsepower set pieces—will tell you, three is not nearly enough. Three car chases in a Fast & Furious movie feel like a party foul on the level of bringing a six-pack to a summer barbecue with half of it already drunk.

But the real problem is not simply the paucity of squealing rubber on road; it’s the filler that pads the more than two-hour film while we wait impatiently for fixes of fuel-injected mayhem to arrive every half hour.

Sometimes it’s repetitive and not terribly inspired hand-to-hand fisticuffs. Mainly though, it’s talk—stiff, dumb speechifying that feels recycled from other, better films. The words have an air of obligation and conscription and are spoken by actors who often appear as unengaged with the material as their audience. The jokes, monotonous and puerile, fall flatter than a blown out tire on the 405.

Idris Elba, playing a bad guy who helpfully introduces himself in the opening scene as the bad guy (the character’s actual name, Brixton Lore, sounds like a long-shuttered used book shop), gets the worst of it. Given mechanical superpowers by an evil and shadowy corporation, he spends much of the film monologuing like a low-rent Marvel villain, chattering forth about how he is the next step in the evolutionary process. (“The more machine I become, the more humane I feel!”) Before the film’s conclusion, he utters nearly every cliché in the malefactor playbook from “No witnesses” to “Bag the asset.”

Like all of the Fast & Furious films, this movie has a running theme of family. Dwayne Johnson’s federal agent Luke Hobbs has been estranged from his Samoan mother and brothers for a quarter century; Jason Statham’s ex-intelligence mercenary Deckard Shaw has had a similar falling out with his sister Hattie, an MI6 field agent played by Vanessa Kirby.

But rather than adding a bit of poignancy, the family prattle is just further opportunity for the film to stop dead while the characters attempt to opine before battle. At one point, they literally do so while looking out into the sunset.

The most disappointing words are those shared between the title characters, who spend the movie bickering like emotionally underdeveloped teenage boys on the way to Grandma’s house. No one was expecting Midnight Run level repartee from Hobbs and Shaw, but is it too much to ask for a bit more than the who-has-a-bigger-penis stuff we get here?

Not only does their quick-fire acrimony grow quickly tiresome, it—unlike Brixton—never evolves. As a result, the actors are robbed of the opportunity to play off each other in surprising or interesting ways. It is impossible to judge their chemistry because they are both just inert forces; they don’t react to each other as much as just slam together in a cacophony of cut-rate insults.

Like with Elba, director David Leitch misuses Statham. The Meg star punctuates his punchlines with an exaggerated twist of his lips, the facial equivalent of a trombone’s ‘womp womp.’

Johnson, on the other hand, is the Breyers ice cream of tentpole action stars: always consistent, reliable and enjoyable, if perhaps a bit over-predictable. (The movie gives him lots of opportunities to be shirtless, which is a plus.)

The film’s primary asset—not counting the McLaren, the Peterbilt, and the strung-together Chevys—is Vanessa Kirby as Hattie Shaw.

The Crown actor has a no-nonsense approach to her readings of her much-nonsense lines. Her fighting is every bit on the level of her more experienced male counterparts, and is done with considerably more joie de vivre. Her skills are deserving of a much more inspired platform than the one she is given here.

If the ultimate outcome of this sophomoric spinoff is her addition to a series that—just like that old beater stalled out in the driveway—promises to stay with us for an eternity, then Hobbs & Shaw isn’t a complete loss after all. 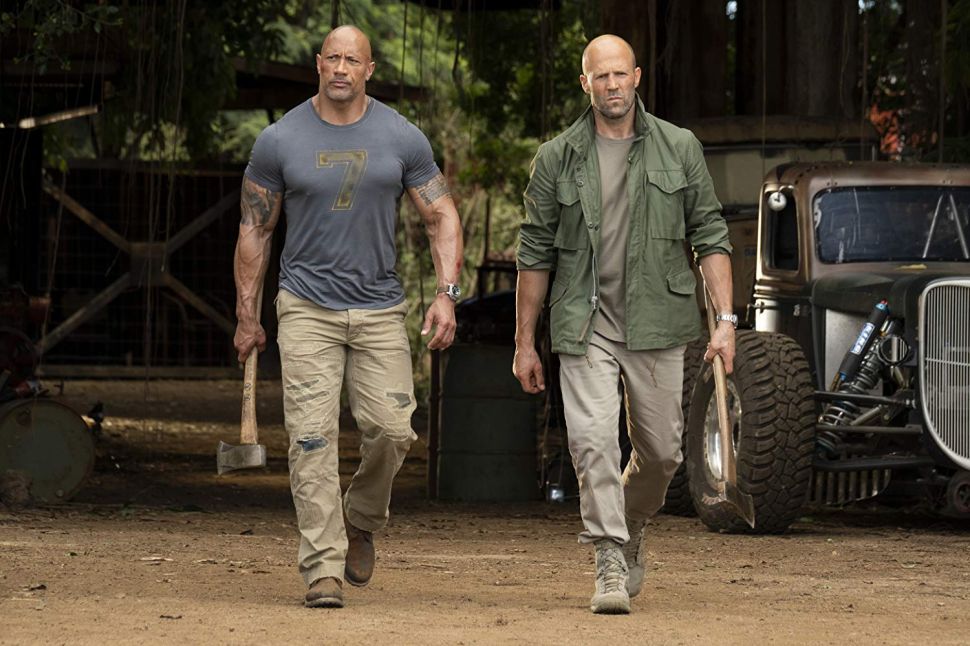