Over the weekend, anti-government protests and militaristic police pushback in Hong Kong escalated; a sit-in staged at the Hong Kong International Airport that started on Friday by Monday had grounded all of its flights for the day, due to the volume of protesters occupying the space. A since-suspended extradition bill proposed in February served as one impetus for the protests, but demonstrators have also been responding en masse to harsh retaliation tactics from Hong Kong police. Members of the riot police force have been captured on camera deploying tear gas in mass transit rail stations, and a viral tweet from Sunday shows a young woman whose right eye was apparently struck and bloodied by a rubber bullet fired by Hong Kong police.

At Hong Kong International Airport especially, a blossoming proliferation of protest art has sprung up to challenge arriving travelers and observing members of the media, with the intention of deepening their understanding of what activists have deemed Hong Kong’s “Summer of Discontent.” Many demonstrators affixed artificially bloody patches to their eyes in solidarity with the aforementioned injured woman, and airport protesters stuck messages written on Post-It notes to a “human Lennon wall,” in reference to an anti-surveillance structure in Prague.

SEE ALSO: Ai Weiwei Is Planning to Make a Documentary About Protests in Hong Kong

Dozens of flights have been cancelled after several thousand anti-government protesters gathered at Hong Kong International Airport.⁠ ⁠ Operations were "seriously disrupted", according to officials at one of the world's busiest transport hubs.⁠ ⁠ Some demonstrators wore eyepatches, in reference to a woman allegedly shot and injured by police during Sunday's clashes.⁠ ⁠ Click the link in our bio to read why the protests are happening.⁠ ⁠ Credit: Thomas Peter/Reuters #HongKong #HK #China #politics #democracy

Dissident artist Ai Weiwei, who announced last week that he had sent researchers to Hong Kong to document the protests for a potential documentary, has also been posting footage of the airport demonstrations on Instagram.

Back in July, Hong Kong-born artist and director Wong Ping compared one of his works to the uprising back home. He was inspired by an incident in his own life: while riding a bus, he noticed a cockroach skittering up the arm of a pregnant woman who hadn’t noticed the insect’s intrusion.

Rather than yell out a warning and potentially scare a stranger, the artist ultimately remained silent. “This pathetic story can be related to anything in life, and even the situation of Hong Kong nowadays,” Wong told Artnet. “We think a lot: should we go harder? Should we take over the counsel, the office of the government? Maybe I should just be a good protester, a quiet protester. And in the end nothing happens, and we are still controlled by China.” The multitude of dissenters speaking out against the government in China shows that for now, its citizens are not only prepared to launch loud protests, but find ways to use quiet protest as a silent bullet. 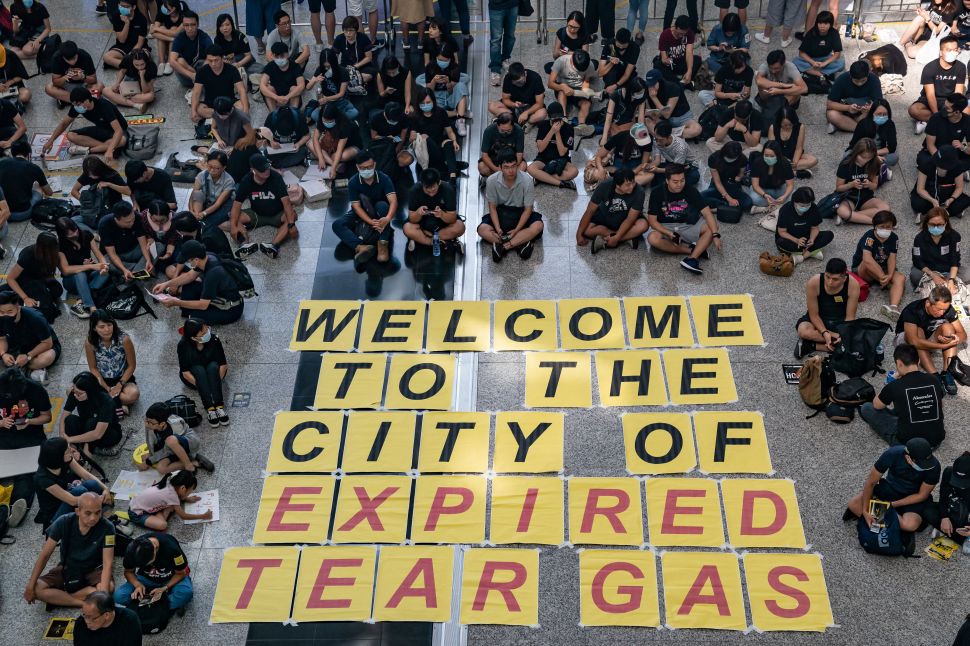