In her new stage show, Get on Your Knees, the comedian Jacqueline Novak talks a lot about oral sex.

But it’s a particularly discursive and intellectual conversation about oral sex. Novak also covers: poetry; ghosts; linguistics; book stores; and the benefits of being a National Merit Scholar after scoring particularly well on her PSATs.

The monologue, produced by the comedian Mike Birbiglia, presented by the actress Natasha Lyonne and directed by the actor/comedian John Early, has become something of a sensation at the Cherry Lane Theatre in New York’s West Village, where it currently runs until August 18. On a recent Wednesday, an hour or so before she went on to do her 90-minute set, Novak dryly spoke about her pre- and post-show routines.

SEE ALSO: 75 Minutes Before Curtain With Alex Brightman as He Gets Into Demon Mode

Observer: Do you get anxious before you go on stage?
Jacqueline Novak: I don’t know if “anxious” is the word, but I’d say there’s some nervous energy. I prefer that to feeling no energy. Nerves feel normal to me. When I started stand-up, I would feel sick to my stomach for days in advance of a set. I used to think that if I’m doing a show tomorrow, that means I have 24 hours to fix everything I’ve ever wanted to fix about my act. But I’ve let go of that. My friend [the writer/performer] Cole Escola recently said it’s best to be in a silly mood before you go on, and in the case of this show, my director John Early is always a bit silly, so that’s a huge bonus for having him around.

What do you do just before you go on?
I figure out which grey t-shirt I’m wearing. John and I will chat about a few intentions for the night. Then I fix my ponytail. I get it in the best shape I can get it in, which is an ever-evolving process. I leave my makeup for the last couple minutes so there’s something to do. Then our stage manager comes and collects me. She wipes the bottom of my sneakers off because otherwise they show my footprints on the stage. It’s a little ritual. It feels sacred. Madonna’s “Like a Prayer” starts playing. That song puts me in a great headspace. I hear that and take it all in: Look at this, this is pretty cool, I’m in a New York theater going out to a room of people getting to say things that I wrote. I take second to feel the intersection of the nerves and the gratitude that’s happening.

Do you eat before the show?
Something really light. It’s hard for me to eat a small bite. I like full meals. I made the mistake early on in my comedy career of eating a full meal and then I feel like I need to sleep for six hours. I like to get onstage not feeling sluggish, and then I actively look forward to dinner afterwards. John and I have been going an insane amount to Café Altro Paradiso. Our pre-show ritual is making reservations for Cafe Altro Paradiso for after the show. We’re really covering the menu. The only thing we haven’t had is the burger.

Are you binge-watching anything at the moment?
I’m not. The remote for the television at the place I’m staying in Brooklyn Heights is nowhere to be seen, so I’ve been TV-less for the entire run. It’s probably good, because it’s keeping things simple for the time being. I just get into bed and read and fall asleep around midnight and I get up around nine.

Has your family come to see the show?
My parents have come twice and they’re really excited about it. They’ve been watching me plug away at it for some time. People that in theory would be uncomfortable [with the material] are people from my hometown—friend’s parents and parents’ friends. I’m not uncomfortable doing it in front of them. I’m more irritated if they’re uncomfortable with it. It’s kind of like now until the end of the time I’m an adult to those people so I can do whatever I want. I’m literally like, “When we knew each other,  I was giving blow jobs and so were your children.” I’m forcing them to call to mind me as a younger person. I think that’s good for everyone. I think it’s too weird the way we’re so neurotic about our sexual stuff between parents and kids, between adults and younger people.

Are you reading anything interesting at the moment?
I like to read stuff that’s totally unrelated. I’m just reading weird books about the paranormal and the occult, and also a book about memory systems. It’s called How to Learn Almost Anything In 48 Hours. 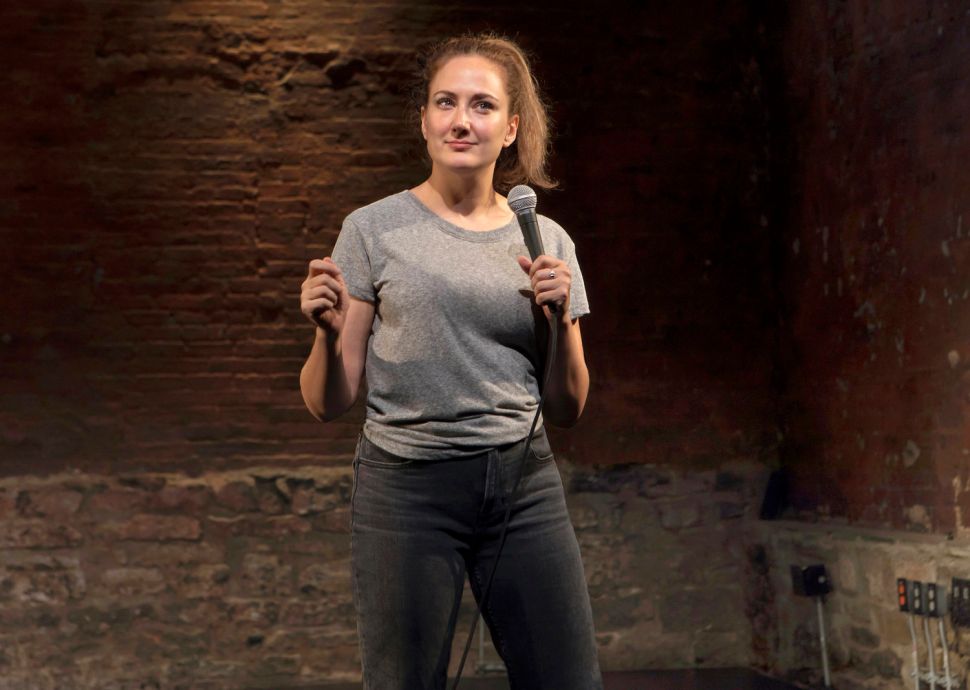