Earlier this summer, French artist JR unveiled a digital mural at the San Francisco Museum of Modern Art titled “The Chronicles of San Francisco.” Building on the legacy of Diego Rivera’s murals in the city, he and his team converted a 53-foot-long trailer truck into a photographic studio and parked it at different locations throughout the city, inviting anyone walking by to participate. The resulting piece, which JR calls a “living painting,” features more than 1,200 people of all walks of life: doctors, drag queens, activists (among them Cleve Jones), members of the San Francisco Gay Men’s Chorus, and even the state’s Governor, Gavin Newsom.

This fall, the Brooklyn Museum will present “JR: Chronicles:” the first major North American exhibition and the largest solo museum exhibition of works by the French artist, including the debut of the monumental new work, The Chronicles of New York City. Similar to its San Francisco iteration, the New York mural presents a portrait of the city’s multifaceted population captured over a month roaming the five boroughs. The 1,000 people who were photographed and interviewed in New York City during the summer of 2018 present a collective portrait of the city, with each person choosing how they wanted to be represented in the final piece.

SEE ALSO: This Artist’s Medium Is DNA, and Her Current Project Is a Love Virus

The TED Prize winner and Oscar nominated filmmaker (for the film he co-directed in 2017 with the late Agnès Varda, Faces Places) was born in France to Tunisian immigrants. JR started out tagging buildings in Paris as a teenager before making the leap to photography, the medium he is best known for now.

The first section of the exhibition, “JR: Chronicles,” will trace JR’s artistic evolution, from his early photographic projects like Expo 2 Rue, 2001-2004, where he documented his graffiti community in action, to Portrait of a Generation, 2004-2006, a collection of portraits of young people from the Parisian housing project, Les Bosquets.

“Over the past two decades, JR has emerged as one of the most powerful storytellers of our time,” Drew Sawyer, the exhibition’s curator, said in a press statement. “Working at the intersections of photography, social engagement, and street art, his collaborative public projects have allowed participants to choose how they would like to be represented in both their communities and the global media.”

JR expanded his practice and began to capture what he perceived to be misrepresented individuals globally in the mid-2000s. In 2005, he traveled to Israel and Palestine to create Face 2 Face, 2007, a giant public art project consisting of a portrait diptych pasted on either side of the wall and in several surrounding towns. The portraits on the diptych, which were displayed side-by-side and with no indicators signifying which person was Israeli and which was Palestinian, depicted people who lived on opposite sides of the wall but held the same job: teachers, doctors, athletes. Ephemera from the project, which was considered the largest illegal photography exhibition ever made in Israel, will be on view at the Brooklyn Museum show.

Also on view will be photographs and videos from international projects like Women Are Heroes 2008-2009, a collection of large-scale photographs honoring women’s contributions to public life, and The Gun Chronicles: A Story of America, 2018, a video mural amalgamating the complex spectrum of gun views in the United States especially pertinent in today’s political climate.

“JR: Chronicles” opens on October 4 at the Brooklyn Museum. 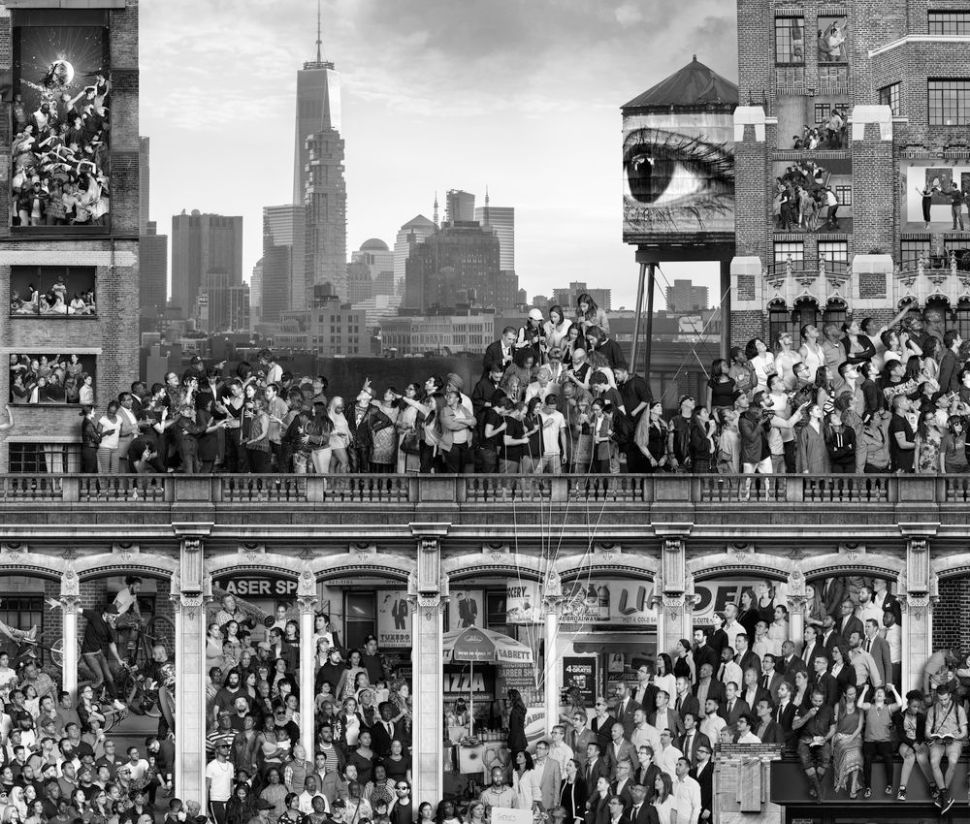