Showtime’s new comedy-drama On Becoming A God In Central Florida takes place in an “Orlando-adjacent” town in 1992, but you can easily picture the stripped-down plot—in which a brainwashing multi-level marketing scheme ruins a family’s finances—occurring now, and anywhere. Instagram and Twitter DMs are flooded with messages from old, sorta-aquaintances from high school hawking a great facial cleanser; an industry-specific Facebook group I’m in recently had to start approving all posts because so many people were posting opportunities to “be your own boss.” Multi-level marketing schemes have had a resurgence recently, which makes On Becoming A God timely, heartbreaking and infuriating all at once.

The heightened rage of women—for very good, and very obvious reasons—is also a theme in the Showtime series created by Robert Funke and Matt Lutsky. Perhaps the biggest draw is Kirsten Dunst’s unsurprisingly impressive and raw portrayal of Krystal Gill, a mother who works at a local park and is trying to keep her family afloat. Before the series starts, her husband, Travis Stubbs (Alexander Skarsgård, goofy and virtually unrecognizable), has become a full-blown believer in Founders American Merchandising (lovingly nicknamed FAM to seem more inviting and less evil), a pyramid scheme with cult-like elements that promises a more successful and literally richer life.

SEE ALSO: HBO’s ‘The Righteous Gemstones’ Skewers the Hypocrisy and Greed of a Megachurch

With FAM, you can achieve your dreams without working a day job—ahem, a J-O-B (FAM spells it out as if it’s a dirty, unspeakable word). “One day we’ll own a yacht,” Travis reassures his wife. “We don’t need a yacht,” Krystal retorts. Krystal, a “stinker thinker,” isn’t trying to become wealthy; she just wants to live, to pay her bills, to support their child. But Travis has loftier goals. Blinded by optimism and the potential to simply live better, he buys into FAM completely. In the pilot episode (you can already preview the first two episodes, if you’d like to avoid this spoiler) and against Krystal’s wishes, Travis quits his J-O-B to dedicate his life full-time to FAM…only to immediately drive his car into a lake and get eaten by a gator.

Have I mentioned that this is a comedy? On Becoming A God’s sense of humor is sharp and peculiar, easily cutting through the plot’s bleaker moments without actually distracting from them. Much of my notes equate to a large question mark, trying to figure out the series’ tone and intentions. (But if you consider the show’s history, this makes sense. It was originally developed in 2017 for AMC with The Favourite‘s Yorgos Lanthimos as an EP and set to direct the pilot. A year later, it moved to YouTube Premium sans Lanthimos, and a year after that, finally moved to Showtime.)

Krystal, soon dubbed “the Alligator Widow,” barely has time to even grieve her husband’s death because she’s instead introduced to the host of problems he’s created and that she’s tasked with fixing: they’re deeper in debt than she thought, deeper into the FAM scheme, and with no way to get out without, well, first going deeper in.

Travis’ “upline” (the person above him) was Cody Bonar (Théodore Pellerin, holding his own against Dunst’s talent), and he becomes something of a partner to Krystal. They need each other, especially since FAM is all about families (and men) so Krystal can’t work her way up the FAM ladder alone. They form an unlikely pairing that teeters somewhere between lust and disgust, each bringing out elements of the other that were previously repressed. Cody is a true believer in FAM, dying to move up and impress Obie Garbeau (Ted Levine and his glorious mustache), the man behind the entire operation and voice on the creepy “inspirational” tapes. Obie is a dazzlingly weird character, but he has the drive and presence of a successful cult leader—as well as the sinister qualities necessary to keep it going.

As we (and Krystal) get deeper and deeper into the world of FAM, which is far darker and more fucked up than originally imagined, On Becoming A God manages to both spiral while remaining focused. Occasionally it does lose the thread, lessening some of the stakes that were present in the first few episodes, but that generally serves to expand the show’s scope—like in the subplot where Krystal convinces her generous, supportive neighbor Ernie (Mel Rodriguez) to get into FAM, effectively screwing over both him and his wife Bets (Beth Ditto), or when she and Cody are forced to attend hilariously creepy FAM rallies and retreats. But it at least never loses sight of Krystal. She’s at the center of it, knee-deep in shit and constantly trying to dig herself out at every turn. She’s used to being put upon and not standing up for herself; she also frequently lashes out in anger, which tends to backfire because of the world around her. Dunst is a force throughout the entire season—it’s impossible to take your eyes off her.

But On Becoming A God In Central Florida mostly succeeds because it never loses the themes that propel it, particularly how dire it is to be poor, the desperation for something—anything—better than this, and how multi-level marketing and pyramid schemes prey on the people who have the most to lose. 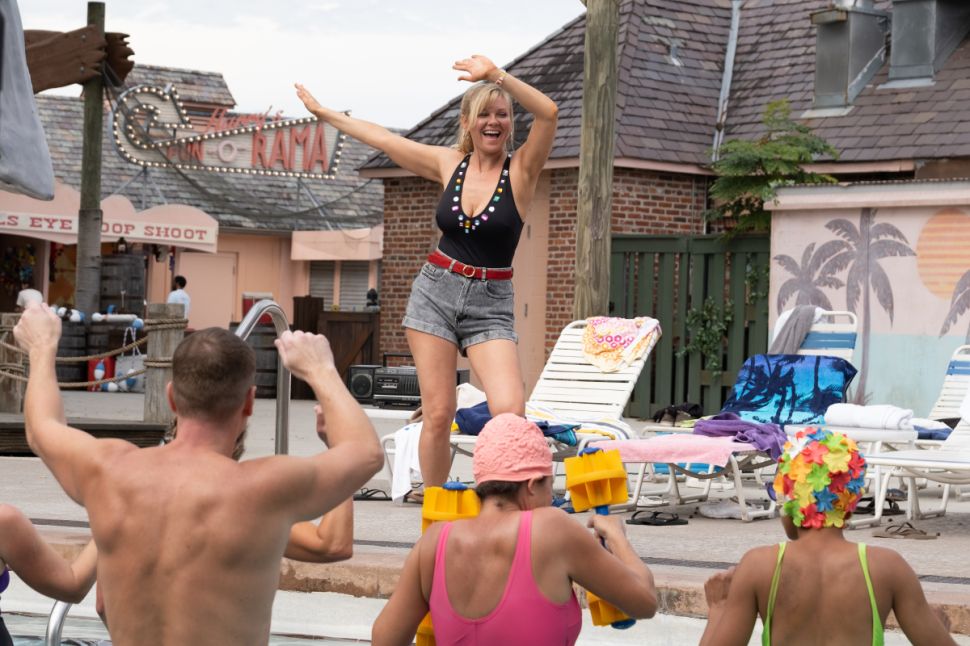