Good middle market dealers rarely get the praise they deserve. They get a fraction of the press of their blue chip counterparts—regardless of show quality. When their artists succeed, they leave for larger galleries. Those who stick it out in this segment of the business have to hustle constantly, often with no recognition or reward.

Last month, Toronto dealer Clint Roenisch eloquently discussed these issues over Instagram in a tribute to Toronto-based dealer Katharine Mulherin. Writing of her death, and the importance of honoring and preserving her work, he worried that the culture was not up to the task. “The legacy is often fragile and gossamer thin,” he wrote of Canadian gallerists. In truth, though, that legacy is in jeopardy everywhere. “We are essentially the background, the stagehand with the ladder, the barker on the sidewalk: people should remember the shows more than the venue.”

As Roenisch points out, artists need dealers who are every bit as daring as them to make their work possible, and that’s a rare breed. When I think about the best work I’ve seen in New York, it’s often at galleries that have changed names several times, moved to new locations, and through all adversity, continued to launch crazy shit. It’s the kind of work that builds the city’s cultural legacy, and if we don’t honor it, we put that legacy at risk.

Let’s make sure that doesn’t happen. I want to live in a New York that supports the dealers who make this city interesting, so I’m issuing a challenge in part inspired by Roenisch’s words—his moving tribute to Mulherin and astute observations about the art scene in Toronto and beyond. The task I have for you is simple: name or visit four risk-taking galleries. I’ve singled out those spaces I’ve been to recently run by gallerists who rarely play it safe, who deserve exposure, and have probably changed either the name or the business model of their gallery at least once. Go see their shows, find some others, and never let anyone forget how great they are.

When Jimi Dams closed up his Lower East Side gallery, Envoy Enterprises, in 2017, he expressed feelings many insiders shared but would never utter out loud. With experimentation out, and dollar signs the only currency of value in the art world, the job was “not fun anymore.”

Envoy specialized in weird art nobody else would show—sculptures designed to be exhibited in kiddie pools and installations that resembled a death metal funeral. A lot of the time I found the aesthetic too bombastic to match my own tastes, but I always respected the shows. They challenged me. Like the mononymous Hudson of Feature Gallery (his former, now deceased boss), Dams will debate the merits of an art work with just about anybody, so when he closed Envoy, friends talked about it for months.

But like most dedicated dealers, Dams’ departure did not last. Just one year later, he formed Empirical Nonsense, a gallery much like Envoy in its willingness to take on risk, but without the focus on sales. One show included a series of wall mountable breasts and stretchers woven with paint that resemble flesh picked out of a car wreck. While their upcoming show may need rescheduling—Dams informs us his space recently doubled in rent—the title of the gallery’s upcoming show remains simultaneously dreadful yet alluring. “Old Glory Hole”—may it be dirty, but not vile.

It’s not every day a dealer can describe an artist as “one of the most interesting people on the planet” without exaggeration. I still remember Benjamin Tischer’s giddy smile when I told him I wasn’t familiar with the work of BREYER P-ORRIDGE—the person on whom he bestowed that title. Tischer spent at least 30 minutes describing P-ORRIDGE’s career as the former lead singer for Throbbing Gristle, member of the video art and music group Psychic TV, and their ongoing project merging identities with partner Lady Jane through plastic surgery. He loved all of it.

Nobody I know ever described the programming at Invisible Exports as brave, even though the description proved accurate. The gallery founders, Tischer and Risa Needleman, were too relatable for the label to stick. They showed what they liked—gay sex, text, and at least one exhibition involving a timeshare scam.

The gallery didn’t really close so much as it changed names, lost the brick and mortar space and dropped a partner. Needleman moved on, and Tischer started New Discretions, an itinerant gallery and curatorial platform that promotes the same crazy ass stuff but in crazier locations. His latest group show, “Free Association,” takes place in a clinic, and celebrates the discovery of ketamine—an anesthetic with an antidepressant effect. The exhibition includes works by Tauba Auerbach, LoVid and Dustin Yellin among others and promises good times—or at least moderate cheer.

It’s a miracle I even remember Jennifer Catron and Paul Outlaw’s 2010 Imeday Imeday Ollarday Icklenay well enough to describe it as the best New York art event this decade. Hosted within the gallery-cum-renaissance dinner hall of Allegra LaViola, a crucial part of the ticketed event involved plying guests with so much wine that no one escaped a debilitating hangover. Show elements included a seven course dinner table perched on a hydraulic lift, men on scooters wearing Jefferson attire, and a live adult chicken hatched from a giant-sized handmade egg.

That was almost ten years ago, and since that time, Allegra LaViola switched business partners, transformed her gallery programming, and even changed the gallery’s name from her own to Sargent’s Daughters. Through it all, though, she maintained the same space, which she currently splits with Shrine Gallery.

Her latest programming has been some of her strongest; this winter, a feeling of slick wetness seemed to permeate the gallery with the launch “Dark Spring,” an exhibition in which Shary Boyle, Sarah Slappey and Brandi Twilley focused on female desire. In May, history transformed the gallery when it exhibited Wendy Red Star’s collages comparing early 20th century objects made by the Native American Crow tribe and those from a recent parade. (Red Star is of Crow descent.)

Strong shows beget other strong shows. On August 8, LaViola will launch an exhibition of junk assemblages by Brooklyn-based sculptor Elisa Lendvay. Intuitively made and striking for their resemblance to gently aged body parts, her ritualistic totems and sculptural relics land somewhere between new age-inspired knickknack and modernist icon. Definitely worth puzzling over.

Candice Madey opened On Stellar Rays with her finger on the pulse. In 2009, her inaugural year, she co-curated a show with performance artist Kate Gilmore, a rising star at the time, (now established canon), and launched a solo exhibition with Clifford Owens, a photographer and performance artist just off a prestigious PS1 residency.

Gallery-goers regularly swarmed her openings due to that programming, which went beyond trend hopping and consistently supported performance artists and challenging conceptual art.  Despite this success, though, Madey made the decision to close her space in 2017 and open Stellar Projects—a private viewing space and vehicle for off-site curation. Additionally, she is now the curator for the Hudson Valley-based River Valley Arts Collective, a workspace and exhibition venue for artists in the Hudson Valley.

Oddly enough, even the private shows Madey curates get buzz. At a recent opening, several friends mentioned her show, “Ten at Seven” at the SJ Weiler Fund, (open August 7 and September 11, 4-7 p.m.), a historic (albeit ominous) look at artworks addressing politics and social issues. The intimate collection of work includes dozens of Pam Lin’s glazed stoneware eyes overlooking Sofia Cordova’s pink taxidermied dove. The pink palette and gender fluid culture it evokes would feel friendly and inviting, were it not for the police state type eyes overlooking the whole show. 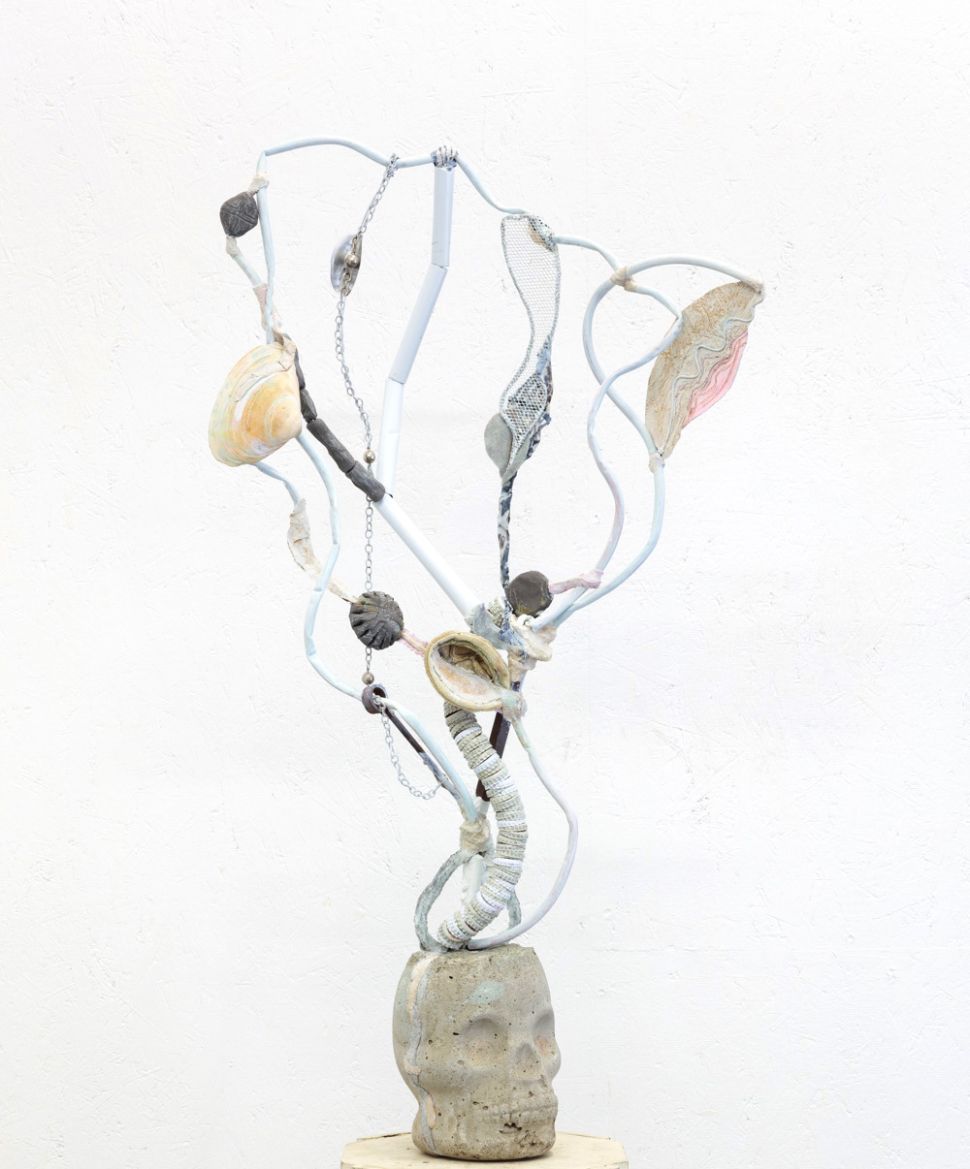