Pushback against Amazon’s involvement with U.S. Immigration and Customs Enforcement (ICE) reached new heights in the past week, shedding further light on the retail giant’s affiliations with potentially predatory cloud computing technology and bringing a dissident artist to the fore. #JewsAgainstICE demonstrators were arrested by the dozens on Sunday during a protest at an Amazon bookstore in Manhattan, and on Monday, Amazon-owned Whole Foods employees released a letter demanding that Jeff Bezos end all business with Palantir Technologies. Amazon provides Palantir with cloud computing services, and the software company provides ICE with data used for immigration raids and similar law enforcement stratagems. One of the protesters arrested on Sunday was Molly Crabapple, a New York-based artist and writer known for her unique methods of investigative illustration: she’s drawn the Guggenheim Abu Dhabi labor camps, recent protests in Puerto Rico and the Guantanamo Bay pretrial hearings of Khalid Sheikh Mohammed.

On Sunday, me and my friends were among dozens arrested protesting Amazon's collaboration with ICE, at a protest organized by @JFREJNYC and @truah

Many people who follow me are furious at ICE's horrific actions but feel helpess. Start by reaching out to local groups pic.twitter.com/6HgxtHUzvg

Crabapple, who’s managed to construct a robust fine art career on the fringes of the fine art world, has always used her creations to evoke alternate ways of looking at political clashes in America and abroad. “Political art should be out in the world,” she told Artnews in April 2019. “On the walls. On the streets. It’s cool to have political art in the gallery because it might sell, and artists need to make money and also because the art is beautiful and should be appreciated for its own sake. But I don’t think the vast majority of art, in the context of a New York gallery, is doing actual political work…it’s grandiose to believe you can change the world by hanging paintings in what’s essentially a luxury-goods shop.”

Crabapple and other demonstrators have been speaking out against Amazon’s vast data mining capabilities, which are frightening in their own right, for years. However, the ever-expanding company is also apparently in the business of hiring “U.S. Immigration Specialists” for Amazon’s Global Immigration Team. A description on the Amazon Jobs portal site requests candidates who can “respond to inquiries regarding U.S. immigration case status…including displacement or transfer strategies, by working closely with employees, their managers and HRBPs, external counsel, and other leaders on the immigration team.”

When the boundaries between independent companies and federal law enforcement agencies all but fall away, that’s when you know you have a problem that’s certainly worth fighting against, and potentially getting arrested for. 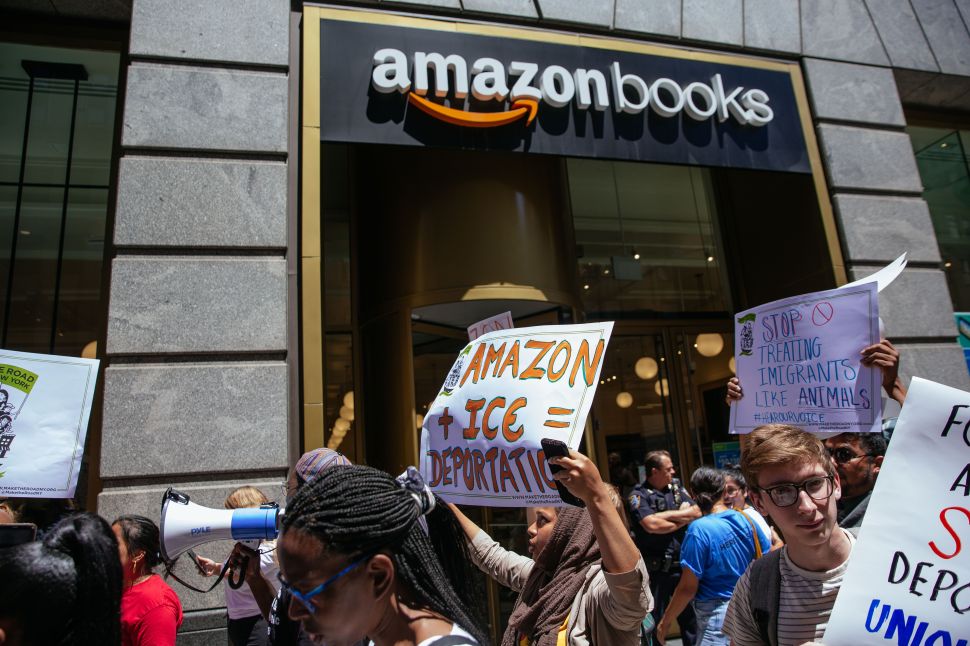