When it hit American cineplexes in the spring of 2001, Baz Luhrmann’s Moulin Rouge! seemed wildly ahead of its time. A manic movie musical set in 1899 Paris, with a defiantly anachronistic score of appropriated pop, rock and disco hits, it was the quintessence of millennial aesthetic overdrive. The cartoonish cinematography crammed in more queasy angles and smash cuts than Ken Russell or Terry Gilliam would ever dare; its retro-cabaret vibe anticipated Postmodern Jukebox; feverish and easily distracted, the film was a two-hour sonic and visual megameme. Glammed out in supersaturated, steampunk’d, Belle Époque style, Luhrmann’s gaudy vision—vaguely queer, globalist and anti-hierarchical—seemed destined to define 21st century cinema.

Then came September 11, and Moulin Rouge! shriveled into a tacky, reactionary pumpkin. All that visual excess and sentimentality now seemed embarrassingly out of touch, wasteful and hollow. Those boffo musical numbers? Sleazy, emotionally stunted byproducts of bygone MTV and postmodern gestures in a world hungry for reality TV and clear-cut villains and heroes. Irony was dead. Camp was in hibernation. And Luhrmann was out of fashion.

Eighteen years later, with the property retooled, remixed and relocated to Broadway, how culturally relevant is Moulin Rouge! The Musical? Neither rollicking prophet nor ham-fisted artifact, Luhrmann’s splashy zeitflop is exactly where Broadway lives, for better or worse. The adaptation, with a tidy, problem-solving book by John Logan, female-and-trans-empowering choreography by Sonya Tayeh, and farce-with-a-heart maximalist staging by Alex Timbers, Moulin Rouge! sparkles like a million falling sequins, tickles like a chorus girl’s feathers, and burns like a shot of absinthe engulfing your brain.

Logan’s tweaks to the original screenplay are neat and necessary. Now the male ingénue, a virginal writer lured to the City of Light by the promise of Art and Love, is an American: Christian (Aaron Tveit). Our hero quickly falls in with bohemian painters and composers such as Toulouse-Lautrec (Sahr Ngaujah, salty and fun) and Santiago (Ricky Rojas, spoofing the film’s Latin clichés). These outlandish artistes bundle Christian off to the hottest nightclub in town, the Moulin Rouge, where the lad promptly falls in love with the house diva, Satine (Karen Olivo).

Alas, Satine’s affections have been promised to a sadistic moneybag, the Duke of Monroth (Tam Mutu), with the Moulin Rouge’s oily proprietor and emcee, Harold Ziddler (Danny Burstein), playing go-between. After some mistaken identities and PG-13 sex antics, the plot more or less settles in. Christian and Satine fall in love, but must hide it from the Duke, who agrees to bankroll a new theatrical extravaganza starring Satine and written by the bohemians. Secret affairs, showbiz intrigue, the battle between investors and artists—they’re all reliable ingredients for backstage rom-com. But Luhrmann throws in another trope cribbed from period sources such as La bohème and Camille: Now and then Satine coughs up a little blood in her handkerchief. Not all rouge is the blush of desire in lovers’ cheeks.

All of these elements will be familiar to those who know the movie, but Logan provides a few smart twists. Luhrmann’s idea for the musical-within-the-movie, the story of a poor sitar player and a maharajah fighting over Satine was a whimsical nod to Bollywood at the time, but today is just tone-deaf brownface. And instead of the Duke ordering his bodyguard to murder Christian, the boy himself goes to a dark place when he thinks that Satine has left him. The swerve into legit near-tragedy, an ardent lover becoming a potential brute, is a story risk that pays off surprisingly well.

And, of course, the playlist is stuffed with plenty of updates. As in the original soundtrack, you’ll hear “Lady Marmalade,” “Roxanne,” “Diamonds Are a Girl’s Best Friend” and Christian’s mad libs medley of love songs (minus, boo, Wings’ “Silly Love Songs”). But now we get Beyoncé’s “Single Ladies (Put a Ring On It)” a snippet of Lorde’s “Royals,” Regina Spektor’s “Fidelity,” and Olivo absolutely tearing up Katy Perry’s “Firework.” Music producer Matt Stine and music director and arranger Cian McCarthy are absolute wizards in weaving together these disparate ditties into one massive pulsing Billboard tapestry, the effect of which is like being hooked up to an IV drip that delivers jolts of dopamine every two minutes.

And really, the drug pushers couldn’t be a nicer, cuter bunch. Director Timbers has at his command an ideal cast of troupers, hoofers, divas and pros. Even the slightly limp and pallid Tveit, who practically disappears every time he’s onstage beside the incandescent and muscular Olivo, gets his chance to shine in the second act, giving unexpected force and intensity to Gnarls Barkley’s “Crazy,” which segues with snaky force into Adele’s “Rolling in the Deep.” Danny Burstein, character actor of unfathomable pathos and skill, keeps the silly locomotive on the rails with his avuncularly gay Ziddler, a descendent of Cabaret’s Emcee with less Weimar creepiness, more Pride Week Bear bonhomie. Olivo, meanwhile, is one of Broadway’s most exciting leading women, and she’s been away too long. As was the problem with the strapping Nicole Kidman in the film, Olivo seems too bursting with life to be a convincing consumptive; then again, she makes dying look kickass.

On the eye-popping front, this deluxe production design never disappoints. Derek McLane’s tumescent, ruby paradise of concentric heart-shaped drops contrasts coolly with the comparatively monochrome but still picturesque Paris exteriors. Can a set make your mouth ? This one does. Catherine Zuber’s sensualist costumes wrap the ladies in acres of lace, bustiers and long gloves, while the men shake their money-makers in snug suits and killer greatcoats. As the main male peacock, Burstein’s Ziddler bustles about his share of flamboyant, bejeweled ensembles, and Olivo looks smashing poured into Satine’s shimmering dresses.

As a genre, the jukebox musical has its highs (Jersey Boys) and lows (Good Vibrations), but it’s hard to love even the best of them as much as a truly innovative book musical. Not trying to be a snob, just stating a fact for those who are serious about art and originality in their musicals. That being said, people can be just as serious about the quotient of pure, adrenalized, pop-fueled joy they’re having on Broadway. And Moulin Rouge! proves that if you go all in on the concept of a jukebox musical—give the people what they want, with maximum gusto and style, and never apologize—it can be addictive as hell. 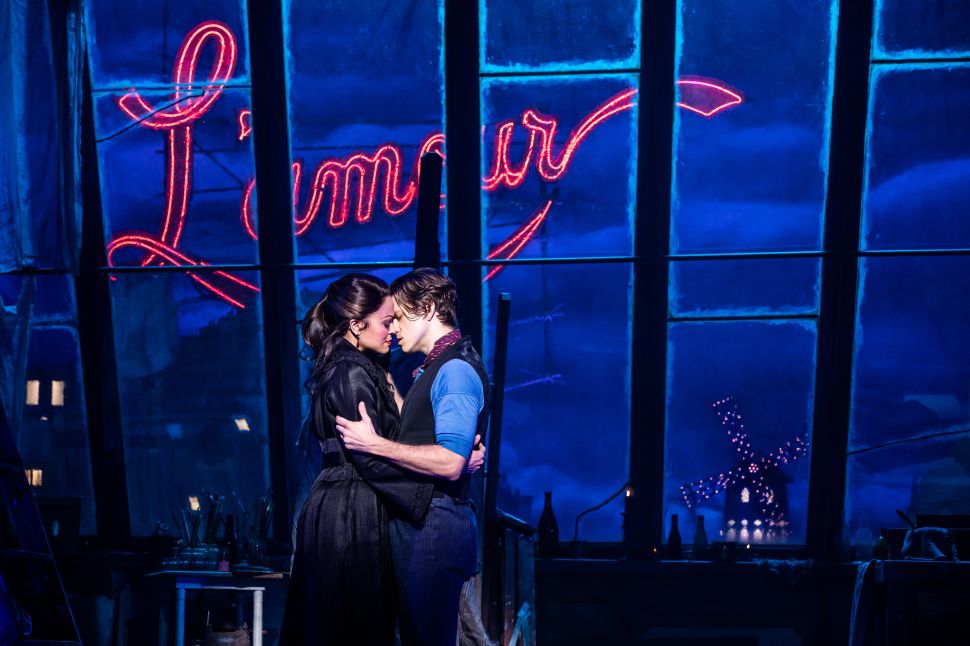