Apparently, when the robot uprising finally occurs, there’s still going to be racism—yes, robot racism. Why, why, why even amongst our mechanical friends is there no equality? Racism, when it comes to robots, has now been proven by science to exist.

In a recent study, entitled “Robots and Racism,” conducted by the Human Interface Technology Laboratory in New Zealand, researchers concluded that there is indeed racial basis when it comes to designing robots.

In the words of the study:

Most robots currently being sold or developed are either stylized with white material or have a metallic appearance. In this research, we used the shooter bias paradigm and several questionnaires to investigate if people automatically identify robots as being racialized, such that we might say that some robots are ‘white’ while others are ‘Asian’ or ‘Black.’

Yes, racial stereotypes are projected on to white and black robots; people perceive that robots have a race, which is surprising, need I remind you, because a robot is a machine and not a human… yet!

According to CNN, lead researcher Christoph Bartneck stated: “The bias against black robots is a result of bias against African Americans. It is amazing to see how people who had no prior interaction with robots show racial bias towards them.”

Our treatment of our robot brethren sadly reflects our society; people project their prejudices on to robots. Robots are treated as social actors who, somehow, have a race. But they don’t; this is only true in the case of the replicants from the movie Blade Runner and, of course, the T-800 and T-850 Model 101 from The Terminator. (All of whom, by the way, are white.)

A simple clue regarding our perception of robots can be found by looking at their portrayal in movies. Will Smith’s I, Robot and Pixar’s Wall-E (Eve) featured white robots. Big Hero 6 has a pretty darn white robot. Not to mention R2D2, a very much white robot.

If you do a Google search for “robot,” you are going to find a lot of similarities. (Spoiler Alert: The majority of robots are white.) I came across something called Robot Drinky: A Robot Drinking Buddy. Any guess to what color your robot drinking buddy might be?

Want some disturbing racist robot stats? In 2012, a study was conducted involving a shooter bias test. Participants were given split-second images of various black and white people, and were told to fire on who they saw as a threat. When robots were thrown into the mix and occasionally popped up, the black robots, that posed no threat, were shot more often than the white robots.

It doesn’t help matters that artificial intelligence (AI) also has a big problem with racial bias. Some facial analysis software has trouble detecting dark-skinned individuals. Yes, robots are also the ones being racist.

And robot bias isn’t limited to race—but also includes gender. Several studies have concluded that people typically prefer to hear a male voice when it comes to authority (think Hal in 2001: A Space Odyssey), but prefer a female voice when they need help (Siri, we’re talking to you).

The issue of robots being white is the same issue as having all Barbie dolls being Caucasian. The researchers involved with the New Zealand study feel that racializing robots as white needs to be addressed as robots increasingly become part of our everyday lives, serving the function of teachers, friends, care-givers and, as I found, drinking buddies.

The grand takeaway of these studies is that we need to correct these problems now. Robots aren’t going away (at least not without a fight). They are deployed in our homes and made to work alongside their human counterparts. If we don’t address these robotic problems now, the AI future will most likely be non-inclusive, for white robots only. 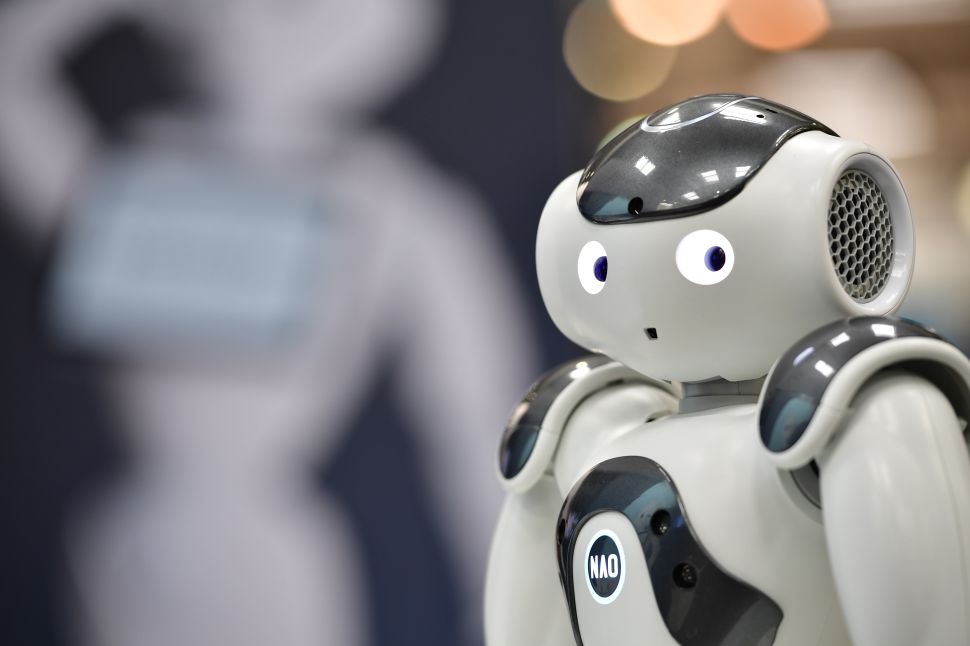