Every day from August 7 to 11, visitors at SoHo’s Leslie Lohman Museum of Gay and Lesbian Art will enter the museum upon signing a waiver acknowledging their consent and understanding of what will take place within the space. They’ll leave with a letter penned by artist Savannah Knoop. One of four performers slated for the museum’s group exhibition, “Arch,” Knoop will interact with consenting participants through the performance titled Tripod Sweep. Seeking consent through eye contact, those who agree will become a three-legged entity with the artist, who will enact a Brazilian jiu-jitsu movement. With the participant’s hip as the axis point, the artist pushes up and over the active person’s shoulders, using them as a temporary crutch to roam the museum together. “This not about winning or losing; you win by engaging,” said Knoop about the collective learning element of the engagement. “Visitors will sign a typical 8.5″ by 11″ letter written in legal language and leave with a personal one about someone’s experience in their body.”

The 38-year-old artist, who uses gender neutral pronouns, has the body of an athlete with muscular arms and a lean physic, moving with grace and swiftness during final preparations at their Bushwick studio. Physical training is rarely required for art; however, for Knoop, who has been practicing Brazilian jiu-jitsu for a decade, marital arts is inseparable from creative expression. Their upcoming performance about challenging social decorum is the most striking fruition of their intertwined practices of art and sports.

Performance and jiu-jitsu have equally informed Knoop’s approach to modern-day interactions and helped them build a hybrid of strength and fragility. They studied performance art with pioneers such as Vito Acconci and Simone Forti, and now, the trust and harmony they encounter in martial arts helps them parse this background. Wrestling four to five times a week, Knoop finds comfort and community in a practice sometimes misunderstood with violence. Knoop recalled the first time they witnessed the softness that lies inside the sport, a decade ago: “During a demonstration, I saw a man fix his opponent’s undone belt and fell in love with that moment of tenderness.”

Collective empathy and public response are pertinent subjects for Knoop, who first came into public awareness with a storied literary hoax in the late 90s and early 2000s. The then 19-year-old artist was amidst the skyrocketed rise of an author named JT Leroy, whose 1999 debut novel, Sarah, chronicles the life of a boy and his relationship to his mother, who works as a prostitute in West Virginia. The book’s real author, Laura Albert, who wrote three novels under the pseudonym JT Leroy, needed an androgynous face to embody her novel’s gender-defying nature. She convinced her boyfriend’s teenage sibling, Savannah, who had just moved to San Francisco, to play the part.

By the time JT’s second book, The Heart Is Deceitful Above All Things, came out in 2001, he was partying with Winona Ryder and Courtney Love. His reclusive, but grungy downtown profile was glossed by a glamorous red carpet appearance at the Cannes Film Festival for the book’s film adaptation in 2004. Soon after, a 2005 New York Times exposé uncovered the scandal and revealed the two figures’ real identities.

The book that Knoop eventually wrote detailing this incredible story of assumed identities and public trickery, 2008’s Girl Boy Girl: How I Became JT Leroy, inspired a film, titled JT LeRoy. It stars Kristen Stewart and Laura Dern as the odd couple in the warped tale of accidental fame. “Life is an ongoing progression and evolution, and we all find ways into ourselves in increments as we get older,” Stewart mused to Observer over the phone, speaking about how she approached the character, adding, “Changing doesn’t always necessarily mean that you’re correcting something that was wrong in your past.” Indeed, Knoop’s fluctuation between gender roles throughout this formative period in their life has shaped their art practice irrevocably, and certainly given them a perspective on asking for public trust that few have experienced. “This story is about truth and lies invented to protect the truth, which can be messy and not one way!” added Dern about the co-dependency and relationship between Savannah and Laura, who were at the time deemed con artists by the public.

“This performance is made through exchange and response, which can only be experienced if the viewer approves to participate,” said Knoop about the parallel between their upcoming performance and their incredible story of the public stunt. Agreeing with both actresses, Knoop noted that the movie shows there was no victim or villain in the dynamic between Laura and Savannah: “There was power struggle with a push-and-pull between the two over Savannah’s body.” Similar notions of empathy, redemption and trust now echo in Knoop’s Tripod Sweep, which awaits its participants for collaboration.

Tripod Sweep will occur at the Leslie Lohman Museum of Gay and Lesbian Art from August 7 to 11. 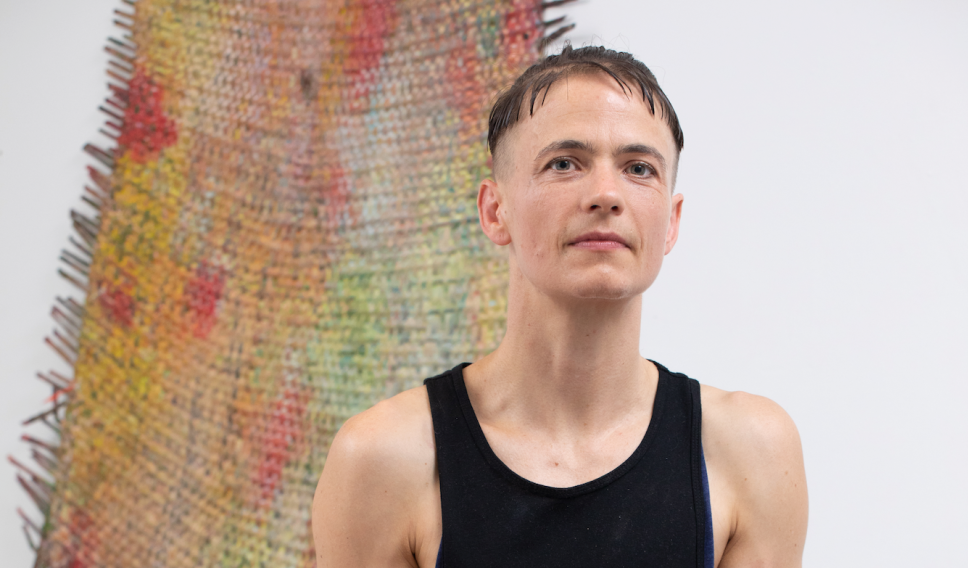