Grief is a gift. No, I didn’t swipe that line from the back cover of an airport paperback. Losing someone you love is absolutely not a gift; it’s a cosmic atrocity, the theft of your heart and peace for an undetermined length of time. But the scar that closes over the wound, that’s a gift. It has to be, if you’re to survive. Grief is the memory of love, and your passport to a world that is larger than you, filled with strangers, where bleak truths can be spoken and shared.

That world is on delicate display in Sea Wall/A Life, two monologues that were originally paired at the Public Theater this past winter. Now it has opened on Broadway at the handsome Hudson Theatre, with its moody design and appealing leading men intact. I reviewed Carrie Cracknell’s mostly satisfying production downtown, and a second viewing only slightly budged my positive conclusion.

The first act, Sea Wall, is the halting, elliptical reminiscences of Alex (Tom Sturridge), a commercial photographer totally in love with his wife, delirious over his sweet little daughter, and bemused by his burly father-in-law, Arthur, an ex-soldier turned math teacher. Arthur has a house the southern coast of France, which Alex and family visit every year for sun, swimming, and awesome scuba-diving views of the sea wall, an oceanic precipice that drops hundreds of feet with little notice. Metaphor alert! Alex’s charmed life is about to suffer a sickening descent. The alternately sensitive and sadistic way Simon Stephens guides us to the tragedy makes for a gut-twisting experience.

One of England’s most prolific and brutally honest playwrights, Stephens gets much mileage out of what Alex doesn’t tell us, moments where words won’t do—such as when his wife, Helen, models a new blue dress and passion robs him of speech. Or later in the story, when he admits the cruelest thing he’s ever done, which is what he says to Arthur after the climactic event. It’s just a prolonged gash of silence, like the hole running right through his middle, which Alex points out early on. That’s grief: your limbs lopped off, your guts ripped out, but still you walk and prattle. To embody such a shadow of man, Sturridge is very apt casting. Slim, pale, boyish, with a slurring British delivery that nevertheless lands in your ear with perfect clarity, he plays Alex as a penitent revenant, almost reluctantly recalling his story, unsure that we’ll ever have meaning in the universe but hoping “one day we will.”

Knowledge and doubt are also central motors in the second monologue, A Life, by Nick Payne—inspired by his father’s death and the birth of his first child. Indeed, to say both pieces are about grief is to say they are about ways of knowing, of coming to grips with the incomprehensible hugeness and facticity of death. And death’s opposite, as the title implies. Payne finds quirky laughs in his alter ego’s overzealous attempts to make lists and manically prepare for his pregnant wife’s imminent trip to the hospital. The parents-to-be comedy is ruthlessly intercut with memories from years earlier, when the speaker watched, helplessly, as his father declined and died from inoperable heart failure. The smash-cutting of OB/GYN hopefulness with ICU horror is manipulative, but effective. For anyone who has spent time watching a parent or lover decline in a hospital, some details will ring painfully true. Happily, A Life is a palate cleanser after the grisly shocks of Sea Wall, so there is ultimate release.

While each piece has its distinct temperature and tone—dank, rising horror in Stephens, neatly braided strands of light and dark in Payne—they are similar in self-conscious literary patterning. “I’m falling absolutely inside myself,” Sea Wall’s devastated Alex blankly admits, an unsubtle echo of the title and the previous metaphor of hole through his abdomen. The narrator of A Life loses his father due to heart failure, and when he holds his newborn daughter in the delivery room, he marvels how she’s “drenched in a whole host of beautiful fucking flora, she looks like a heart….Like an ever-so-slightly over-sized heart.” Whether or not you like to hunker down with a cup of cocoa and this week’s New Yorker short story, such effects can be either annoying or pleasing.

Pleasure is mostly what Sturridge and Gyllenhaal give, even if that’s not always required. On this return visit, I was newly impressed by how Sturridge made his hazy, near-somnolent aura transmit past the orchestra rows, how he fills up the Hudson without straining or cheap effects. He has a magnetic presence that makes you lean forward. On the other hand, Gyllenhaal (not playing British, by the way) seemed too eager to please, layering his sturdy, earnest masculinity atop the puppyish neuroses of the narrator. Gyllenhaal is a fine actor, and a surprisingly strong musical-theater singer (as evidenced in Sunday in the Park with George, in the same venue), but I kept wanting him to blur his character’s lines of sorrow and pluckiness more. He seems too sensible, too centered, to contain the profound ambivalence and frustration Payne writes in.

Chewing over these reservations on the way home, I came up with one possible, albeit drastic solution: flip the actors. Have Gyllenhaal play the carefree photographer gutted by random catastrophe, see how his smug carapace cracks. And Sturridge can lend his mooncalf languor to a bewildered new father still shattered by the death of his own dad. It might even be a smooth transition. That’s another thing about grief: Each one is different, but they converse with each other most fluidly. 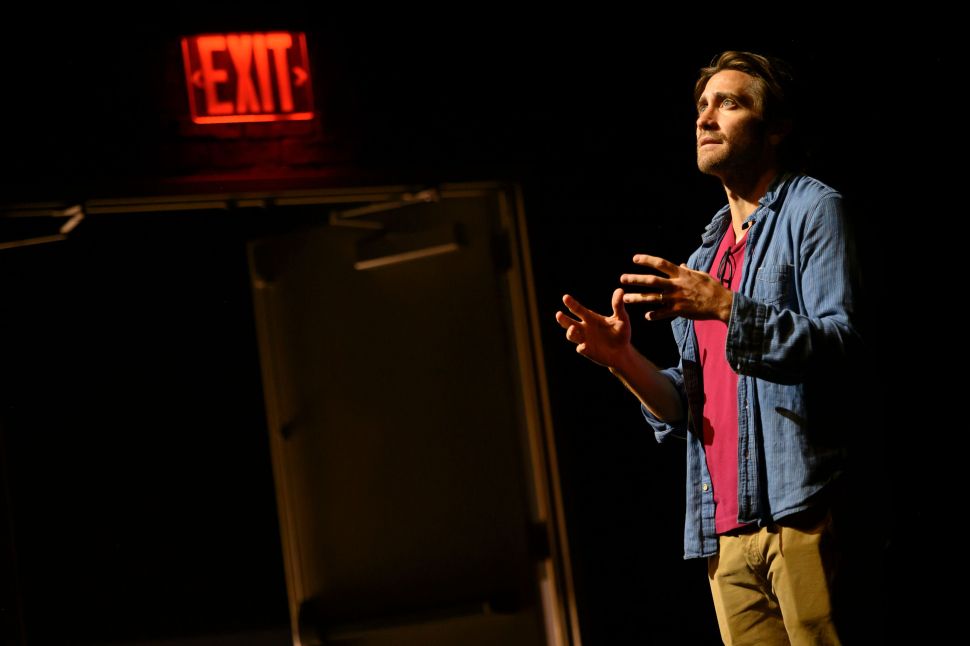