The primary function of an art fair is a marketplace: a venue for dealers to sell as much work as possible to real, interested collectors. It’s not like this isn’t evident pacing the isles of Frieze, Art Basel or the Armory, but amidst the mass of booth-consuming single installations and selfie-traps found at the larger fairs, it’s easy to forget that spectating isn’t actually the point. At the fifth edition of the Seattle Art Fair (through April 4), I had the uncommon experience of finding myself daydreaming as I wandered between the 100-plus stalls about what I would personally select to hang on my wall. What Seattle seems to offer, in a landscape where few do these days, is a connection to the collecting experience.

Rather than solo or duo artist presentations that mimic the exhibition style of a museum show, what you’ll find at most booths is, frankly, more work (by more artists) than you’d expect. In some cases the art was hung almost salon-style, offering an overview of the artists the gallery represents with a broad sweep across styles, medium and period.

Thus, it feels like somewhat more of an intimate experience, coaxing visitors to identify, booth to booth, what in all of this catches their eye. You won’t find a barrage of the contemporary art world’s biggest darlings, (though certainly there are recognizable names throughout). You will find yourself drawn into a booth by one single work that sparks that familiar quickening for something you might love, though the others surrounding it couldn’t do less to ignite that same sizzle. It is, in short, a discovery fair.

This is perhaps a new chapter for the Seattle Art Fair. Notably, David Zwirner and Gagosian chose not to participate this year, which may be in part due to the death, late last year, of Paul Allen, the Microsoft co-founder and instigator of Seattle’s fair, who was one of the city’s biggest advocates for its art scene. Allen’s absence, as gallerist Greg Kucera remarked to Crosscut, could have left some feeling less committed to the project.

But these blue-chip departures (along with others in previous years) have left some worried that the fair’s presence as a destination on the national circuit is in danger. With regional galleries as the draw, will that restrict its audience to basically regional as well? It shouldn’t. This is an excellent fair for any level of collector (or art lover, for that matter). And in this iteration, the style of presentation it offers was given a chance to shine.

Certainly, that means that many of the works for sale are more accessible, less grand in size or show-stopping in intention than visitors to the majors will be used to. By and large, most of it is work meant for hanging on the wall or placed on a reasonably sized pedestal. But for visitors seeking an experience with the awe-inspiring or off-the-wall, Seattle’s roster of eight projects dotted around the center more than fulfill the need.

Nato Thompson, in his second year as artistic director, has brought art so cutting-edge it conjures the uncomfortable. Would you feel self-conscious talking to a sculpture? Stephanie Dinkins’ shell-like form asks you to do just that. Ever longed for the days before you got reprimanded for playing with your food? Bread Face not only gives you the opportunity, she also provides a private little room in which to do so (with bread, naturally). After that, snag a pair of 3-D glasses to take a tour of some larger-than-life reproductions of the odd artifacts held by the Center for PostNatural History. Founded by Richard Pell, the center’s goal is to study the effect of human culture on evolution. That leads nicely into a consideration of Patricia Piccinini’s life-size, too-real sculpture of a woman cradling a fleshy, human-pig-dinosaur form, tenderly cuddling its rolls of loose flesh.

I’ve been a longtime fan of Piccinini’s work, but admittedly her mutant forms don’t strike me as art that many would choose to live with. For that, I would have chosen a mix of realist, painterly paintings and textural or textile abstract wall works. Erik Hall’s dreamily-rendered Cypress tree at Hall-Spassov Gallery and Gloria De Arcangelis’ pensive Muse at Woodside/Braseth Gallery, both of Seattle, are expert examples of the former. Look to Evan Nesbit’s bright yellow burlap with paint squishing through the weave at James Harris Gallery (also of Seattle) and Ko Kirk Yamahira’s canvas where the center has been unwoven, leaving the strands to bow hammock-like in the center at Portland’s Russo Lee for the latter. Beyond that, the treasures I spotted were almost countless. And a well-appointed pop-up from Open Editions (a retail product producer dedicated to working with artists) near to the exit means that anyone can snag a beautifully crafted work by a Seattle creator no matter their price limitations.

What Allen created in Seattle cemented the city as a destination for those seeking immersion in a well-rounded artistic community. Though the galleries that attend may shift, what won’t change is the fair’s place as an integral piece of Seattle’s cultural puzzle. That’s exactly what was intended in its founding, and something any collector, from any part of the nation, knows the worth of in allowing artists to thrive and be discovered by a new audience: priceless. 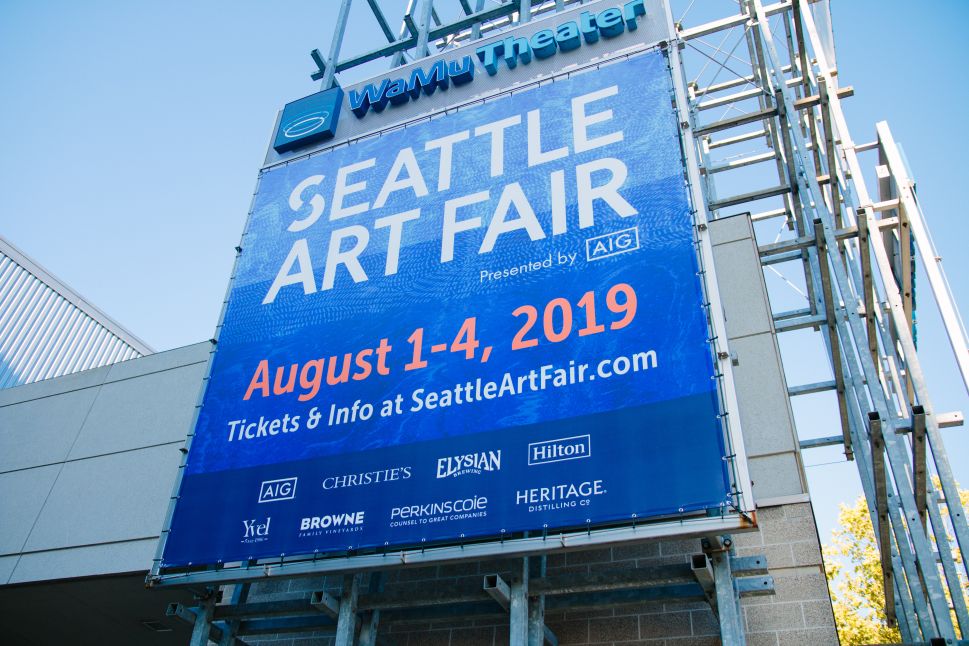