When the first travelers venture to Mars, it may be on the back of a SpaceX rocket. Elon Musk, the company’s CEO has long lamented that the reason he created his rocket-building company was to make humanity a multi-planet species.

That dream took a giant hop towards reality this week.

Tuesday evening, SpaceX pulled off yet another impressive feat of engineering as the company’s Starhopper spacecraft—a prototype for its future Mars exploration vehicle—took flight. Resembling a silvery tower (or perhaps R2D2 sans the iconic blue and white paint job), the craft effortlessly soared to its targeted height of 492 feet (150m) before landing back on Earth.

Powered by a single, methane-fueled Raptor engine, the 60-foot tall (18m) chrome contraption’s brief, 57-second flight demonstrated the vehicle’s ability to take off and land in a controlled fashion, while setting the stage for more aggressive testing in the coming months as the development process continues.

Raptor roared to life at 6:02 p.m. CDT on August 27, following a 24-hour delay due to a last-second technical issue. Spewing flames and churning up exhaust, the stubby rocket ship looked almost surreal as it soared above south Texas. Once the craft reached its FAA-approved altitude, it moved sideways before slowly descending to a nearby landing pad. This marked the experiment rocket’s second—and final—untethered test flight; the first was in July with the craft reaching a target altitude of about 65 feet.

This dramatic display of rocketry is just the beginning. Starhopper is blazing a trail to a more powerful, heavy-lift booster called the Super Heavy and, eventually, an interplanetary spacecraft dubbed Starship that will be capable of carrying up to 100 passengers. The hardware SpaceX is testing now will eventually be used in the construction of that vehicle.

A Rocket to Reach Mars

The Starship system is the next installment in SpaceX’s procession of increasingly larger rockets. Just over a year ago, the Falcon Heavy debuted, and this past April, the vehicle carried its first official payload into orbit. That massive rocket, which is essentially three Falcon 9 first-stage boosters strapped together, boasts five million pounds of thrust at liftoff.

In stark contrast to the iconic black-and-white paint scheme of SpaceX’s Falcon series of rockets, Starship sports a shiny, stainless-steel skin that oozes vintage sci-fi vibes. But this wasn’t always the case; the design has morphed over the years. (For example, the Starship’s skin was once planned to be fashioned out of carbon fiber composites as opposed to the current plan of stainless steel.)

Resembling the rockets of the early space program, Musk said that the Starship’s metallic skin can handle the extreme temperature variations experienced during the different stages of spaceflight, which gives it an advantage over other materials.

Additionally, Starship will rely on SpaceX’s new, more powerful engine: the Raptor. Unlike the ones currently powering the Falcon 9 and Falcon Heavy, which rely on a mixture of kerosene and liquid oxygen, the Raptor is fueled by methane. Musk’s hope is that since Mars has methane, that supply could one day be used to refuel any rockets that land on the red planet’s surface.

SpaceX says 31 Raptor engines will power the Super Heavy rocket, with another seven on the Starship itself. The onboard methane-fueled engines, which are still in development, pack about twice the punch of the Merlin engines currently powering the company’s Falcon series of rockets.

Musk first revealed his grand plans for an interplanetary spaceship in 2016 at a meeting of the International Astronautical Congress in Guadalajara, Mexico. In true SpaceX fashion, he plans for both the rocket and the transporter to be reusable: able to launch, land and repeat many times over.

Details on the project have been scarce over the years, but Musk has promised to provide specifics in late September, now that this final hop test has proven successful.

Starhopper’s success, and resulting retirement, clears the way for the rise of the orbital prototypes. SpaceX is simultaneously building two different prototypes in two different states: Texas and Florida. The vehicles, dubbed Starship Mk1 and Mk2, respectively, are part of a little intra-company competition. Musk and SpaceX are betting that the competition will improve the final Starship design, as well as speed up the process.

“Both sites will make many Starships. This is a competition to see which location is most effective. Answer might be both,”  Musk said via Twitter. “Any insights gained by one team must be shared with the other, but other team not required to use them,” he added.

The dual construction sites will each build flight-ready versions of Starship and Super Heavy, which together will tower nearly 400 feet (122 m) high. Unlike the Starhopper, Mk1 and Mk2 will be powered by at least three Raptors. The test launches of these prototypes will precede operational Starship flights, which Musk estimates could begin as early as 2021. Those first few commercial flights will likely carry communications satellites.

To date, Starship and Super Heavy have just one flight on their manifest. Last September, Musk revealed that Japanese billionaire Yusaku Maezawa booked the first trip aboard Starship—a jaunt around the moon scheduled to occur sometime in 2023.

After that, if all goes according to plan, will be SpaceX’s ultimate goal: Mars. Musk has repeatedly said that he founded the company back in 2002 primarily to help humanity colonize the red planet and become a multi-planet species.

While SpaceX has not released a timeline for its first missions to Mars, Elon Musk has said that the first Mars base—preliminarily dubbed “Mars Base Alpha” by Musk—could be up and running as soon as 2028.

SpaceX’s future Mars plans are quite simple: the company plans to build whatever infrastructure (including landing pads and refueling stations) is necessary to support Starship flights to and from Mars.

For its very first Mars missions, SpaceX would focus on delivering supplies, such as power generators and life-support systems, basically anything that the first astronauts on Mars will need to survive.

Those first missions will also be tasked with finding any natural resources that can provide fuel for future return trips to Earth. Following the first few cargo missions will come a round of both crew and cargo transports. SpaceX may be able to lay the foundations and setup preliminary outposts, but it won’t be able to establish an entire Martian base all on its own.

It will need partners like NASA, the agency’s international partners, and even other commercial space companies—such as Jeff Bezos’ Blue Origin. Habitats, landers, rovers for scouting surface materials and much more will need to be developed if humans plan to one day walk on Mars.

The moon and NASA’s forthcoming Lunar Gateway could serve as pit stops for Starship (reducing the amount of fuel needed for return trips to Earth) and as technology demonstrators, allowing both NASA and commercial companies to test systems before going on to Mars.

One thing is certain: before the first Starship missions can launch to Mars, SpaceX will first have to prove that the rocket can get there safely.

As for the fate of the stubby-looking Starhopper, it will never fly again. Instead, the craft will be transformed into a Raptor test stand, used for static fire testing—routine engine firings while the vehicle itself is held down, unable to fly. These types of tests provide crucial data about the inner workings of the engines.

SpaceX hopes these tests will help future Raptor-powered rockets do more than just hop. Perhaps one day, they will even reach the rusty sands of Mars. 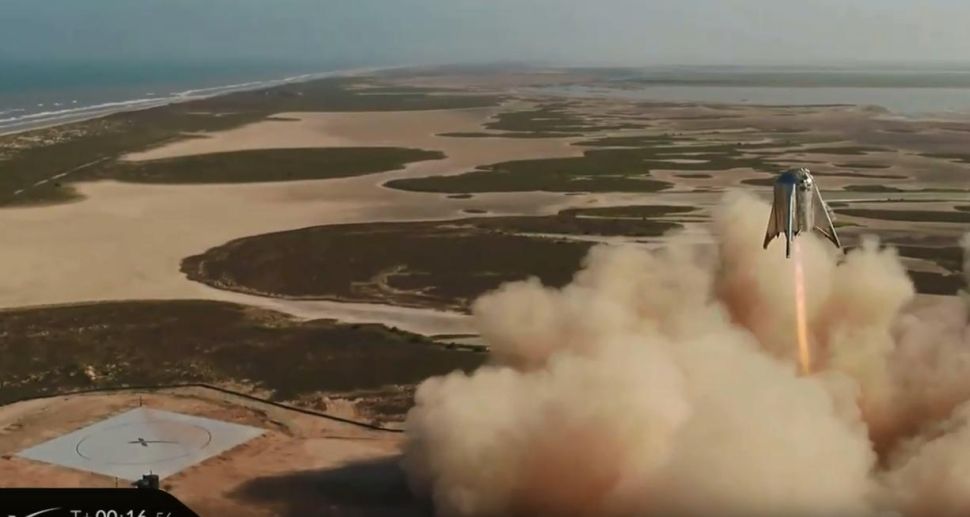