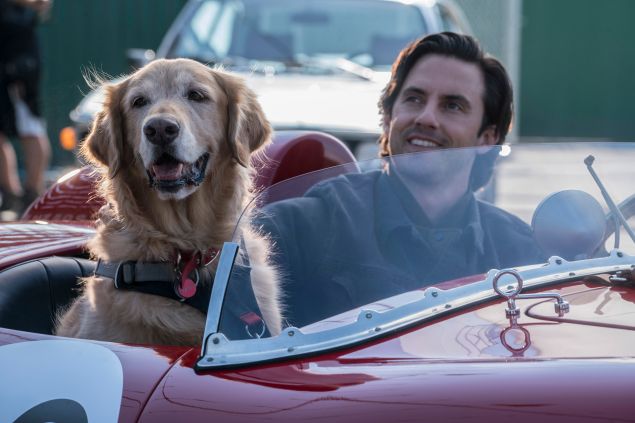 ‘Enzo’ and Milo Ventimiglia in The Art of Racing in the Rain. Twentieth Century Fox

It’s difficult to recall a movie narrator talking quite as much as Enzo the dog does in The Art of Racing in the Rain. He chatters nonstop about a host of subjects, always inside his head where only he and the audience can hear. (That’s because, as he invariably explains, his long flat tongue is not made for creating the complicated vocalizations required for speaking—not like the slender and dexterous human tongue he longs to possess.)

And so he natters on about, say, a documentary he once watched about life in Mongolia, or an epic Grand Prix race from 30 years ago he recently caught in reruns on cable, or a stuffed zebra he is convinced is possessed by a demon. Sometimes he kvetches about bathroom matters; sometimes it’s all about how cool it would be to have opposable thumbs. Mostly he just talks about racing expensive cars.

SEE ALSO: ‘Hobbs & Shaw’ Made a Major Miscalculation With Its Car Chases

If he weren’t voiced by a mellow and serene Kevin Costner, Enzo would sound like Martin Short’s old Ed Grimley character, only with Formula One replacing Pat Sajak and Wheel of Fortune as his object of obsession.

Gifted with The Untouchable star’s mature and masculine tenor, Enzo instead comes off as the slightly nervous yet eager suitor your mother might quietly introduce as her new boyfriend during your next visit home. Clumsily wanting to make a good impression is the only possible explanation for why Enzo talks so damn much on topics that would generally only be of interest to middle-aged men.

Taking the lead from Garth Stein’s much-loved 2008 novel, which Enzo also narrates, the ceaseless verbiage covers every inch of this conventional doggie weeper like kudzu smothering a forest. If Costner were paid by the word for The Art of Racing in the Rain, which tells a story about the life challenges of a talented race car driver played by Milo Ventimiglia, he would take home more moolah then he did from The Bodyguard.

In the early going, hearing the inner thoughts of a canine for that long feels ludicrous. (The voiceover has become the arthritic hip of the current wave of dog movies.)

Eventually though, Costner’s incessant narration lulls you into submission—like a bedside story or an IV drip of a low grade narcotic. After awhile, you begin to give in to both it and Enzo’s non-threatening, well-meaning pop philosophy, with its talk of rebirth and its absurdly extended metaphors about how car racing can tell you everything you need to know about coping with unexpected difficulties and heartbreaks.

After having to contend with a summer’s worth of CGI critters—whether it was The Lion King’s menagerie of blank-eyed fakes or the new Dora the Explorer movie’s sugared-up cartoon of a monkey Boots—The Art of Racing in The Rain’s saving grace is just how good it feels to hang out at the movies with a real-life animal.

Played by a pair of Golden Retrievers that represent Enzo in his youth and his dotage, the canine at the center of the story is engaging and emotive in a manner that his human costars generally are not. This includes Ventimiglia, who seems perpetually unsure of what to do with the heightened emotionality the melodramatic turn of events calls for, and Amanda Seyfried, who plays the love of his life with a blandly maternal sweetness.

With a soundtrack thick with George Harrison and Crosby, Stills & Nash—and its all-consuming passion for everything Ferrari—The Art of Racing in The Rain makes absolutely clear its Baby boomer roots. There is also something distinctly off-putting and a little lazy about the way Enzo’s inner life is entirely anthropomorphized, as if the only things those lesser creatures could possibly dream of is watching TV (in addition to car races and documentaries, Enzo is a big Law & Order fan) and driving around in circles on the track.

Nevertheless, the film has a pleasingly wholesome quality reminiscent of Christian movies, even while its message—which focuses heavily on reincarnation—is decidedly Eastern. It’s the kind of film Kirk Cameron might make if he were Buddhist and his movies were considerably less awful.

Ultimately, The Art of Racing in the Rain has a dog’s pure-heartedness that manages to beat strongly despite generic direction, milquetoast performances, and twelve cubic tons of Costner voiceover. It’s a dog’s world, this movie shows us, and we’re lucky just to drive in it. 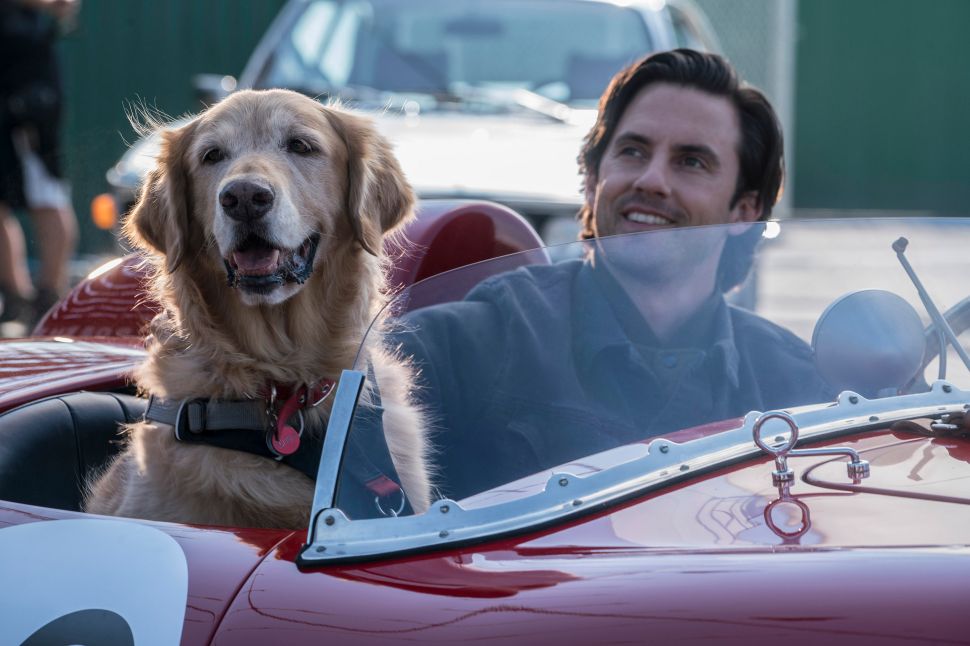