The highly anticipated third season of Netflix’s The Crown will hit the streaming service on November 17, according to a new teaser trailer that dissipated across social media on Monday. In the brief clip, the freshly-anointed Academy Award-winning actress Olivia Colman strolls into frame wearing the instantly recognizable mid-century garb of Queen Elizabeth II. Colman is expertly decked out in a white brocade gown, long white opera gloves, a royal blue sash and of course, an elaborate crown. Since Colman’s casting was announced, fans have been preemptively trumpeting for Emmy Awards on her behalf, but what’s perhaps more interesting is analyzing the visual cues from which Season 3 has clearly drawn inspiration.

Colman inherits the role of the Queen from Claire Foy, and during what we’re calling the “Colman era,” Queen Elizabeth is in the midst of a very interesting point in her reign. Season 3 takes place between the years 1964 and 1976, during which time Elizabeth first began interacting with people on the street during official visits, Africa and the Caribbean were decolonized and a host of other countries gained some form of independence from Britain. This is a period of transition—across the globe and for the extremely cloistered English monarchs. As such, the artwork that captured Queen Elizabeth during this time period seems caught between an age-old staunch attitude and the full-throated uncertainty about the future.

In Netflix’s trailer, Elizabeth can be seen pacing in a room alone, the backdrop dim, with a pensive expression on her face. It recalls the 1969 portrait painted by Italian fresco painter Pietro Annigoni—the second likeness he made of the monarch.

This portrait, appropriately entitled Queen Elizabeth II, shows Elizabeth cloaked in stark red, positioned authoritatively against a grim gray background. Annigoni paints her like a lethal conqueror, resistant to all dissenting opinions. Whereas his first image made of the Queen, in 1955, has been described as a glitzy, “romantic,” depiction, his later painting mirrors the perception of the time: an Elizabeth that was more troubled, facing problems that rested on her shoulders alone. “I did not want to paint her as a film star; I saw her as a monarch, alone in the problems of her responsibility,” Annigoni explained of his 1969 painting. If anyone can actor can handle bringing that kind of existential and political drama to life, it’s Olivia Colman. 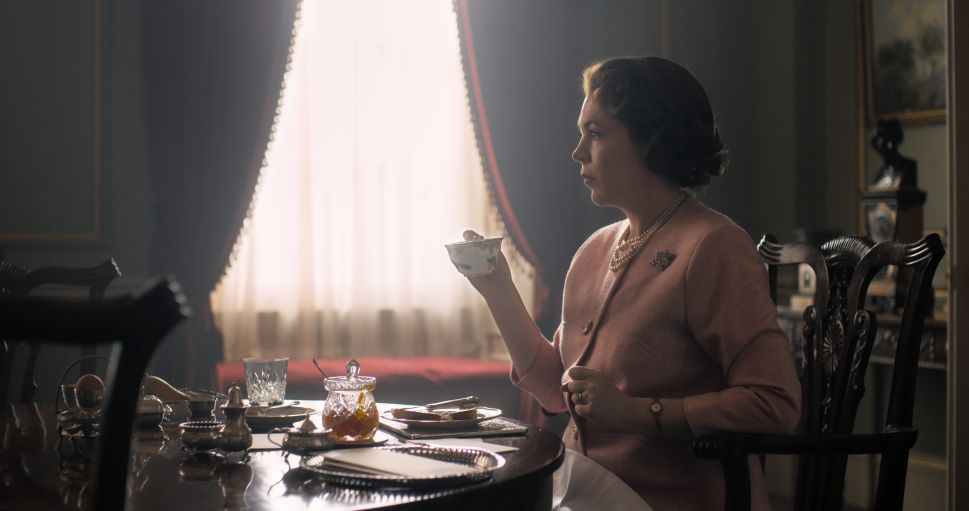