The checkered career of John Travolta rambles unsteadily through a wide range of hits and misses, from the unexpectedly amazing Pulp Fiction to the unexpectedly hilarious and abysmal Battlefield Earth, but hope springs eternal for this talented, almost always ill-advised, and finally fading star. His latest is The Fanatic. It’s a disaster.

SEE ALSO: Casey Affleck’s ‘Light of My Life’ Is Another Dour End-of-the-World Epic

No longer remotely resembling the charismatic screen presence he used to be, Travolta, in this cheap and cheesy low-budget indie, plays Moose, a creepy leftover remnant of the rancid Hollywood underbelly. Moose is a mentally challenged über-fan and autograph hunter whose idea of paradise is the trashy Hollywood Walk of Fame.

With a freaky soup bowl haircut, loud floral shirt and patterned, outdated shorts, he rides a moped and hangs out in nostalgic memorabilia shops, thriving on yellowed posters of long-forgotten horror flicks and acting out scenes from his favorites, replete with costumes and masks. Moose doesn’t seem to have a job, although he occasionally wanders around on Hollywood Boulevard dressed like a London bobby to pose for pictures with Tinseltown tourists.

Moose has one obsession beyond all others: he’s in love with a cherished action star from B movies like The Vampire Killers called Hunter Dunbar (Devon Sawa), and crashes premieres, book signings and private parties hoping to meet his idol in the flesh. Practicing multiple deliveries in front of a mirror like Robert De Niro in Taxi Driver and paying $300 for a sweat-soaked, beat-up old vest Dunbar once wore onscreen, it is clear that Moose is destined for doom.

Things change when his unexplained best friend, a paparazzi named Leah (Ana Golja), shows him how to find the home address of the hero he adores on one of those lethal movie-star maps Hollywood actors consider a plague. Moose starts stalking Dunbar, breaks into his estate, takes him hostage in his bedroom, and occasionally kisses him on his forehead in his sleep.

The movie goes nowhere, turning violent and predictable in time for a dumb, inconsequential and totally preposterous finale. The result is a cheap and toxic mix of Misery and The Fan that is neither as real or as convincing as either.

Directed by schlocky hack director Fred Durst from a moronic script by Durst and David Bekerman, The Fanatic is meant to be a scary and touching valentine to the same festering memory of putrid Hollywood as Quentin Tarantino’s Once Upon a Time in Hollywood, but the only thing worth remembering is Travolta’s brave, misguided performance.

It’s a vivid and startling stretch of his talent to watch him play a sad, tragic character like Moose, and he throws himself into the part, but to what avail? He shifts on his feet and rocks back and forth, sniffing his fingers in a repulsive imitation of autism gone awry, but the movie is ultimately pointless, and everything breaks down eventually, including the human spirit. 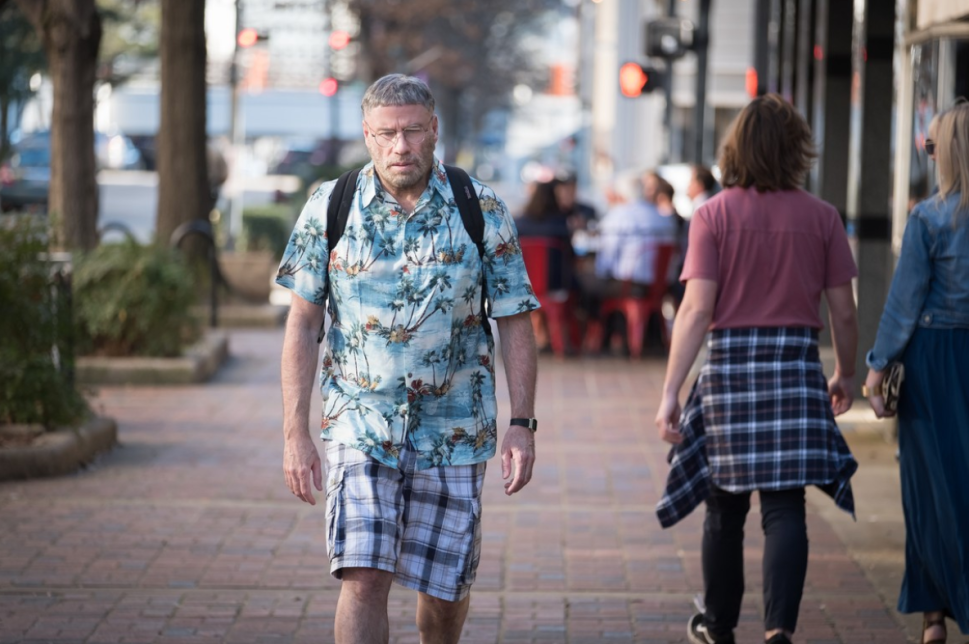