As you have undoubtedly heard by now, The Kitchen is a New York crime drama starring three talented female actors playing characters who end up running a crew of Irish gangsters in 1970s Hell’s Kitchen. The film has been heavily marketed, with Melissa McCarthy, Tiffany Haddish and Elisabeth Moss prominently displayed in subway station and bus kiosk posters showing them on individually colored panels, as if from a comic book, which is what the film is based on.

Comic books are super popular now, right? Women doing stuff we’ve seen guys do, like Ocean’s 8—people eat that stuff up, don’t they? And who doesn’t love these actors—they practically hit every quadrant!

SEE ALSO: ‘Scary Stories to Tell in the Dark’ Offers Up a New Genre: Horror for Kids

While it may be an original story, The Kitchen is burdened by much of the same cynicism that has been fueling the sequels and remakes with which we have been pelted throughout the summer. Which is to say it is the kind of movie that gets made once storytellers and filmmakers are pushed aside and the moviemaking process is ruled by marketers making decisions based on what trends well on Twitter or what buzzwords appeal to test marketing groups.

It’s not character-driven, that’s for sure. The roles presented here more closely resemble stale tropes than they do real people; we get the protect-her-family mama bear, the standard issue femme fatale and the victim finally gaining the wherewithal to stand up for herself. Despite the efforts of the leads, each character is far too undercooked to pilot a movie. Only Moss, who allows her character’s latent rage to transform into joy as she relishes the bloody business of gangstering, stands out.

Don’t look to the story either, which barely moves beyond its set up. Once their husbands—played by Brian d’Arcy James, James Badge Dale, and Jeremy Bobb—are arrested pulling such a stupid liquor store robbery that you wonder how they could have ever made money in the first place, the wives take over their business and find far more success. The plot machinations call for a series of double crosses that never really mean much because the script never allows for the development of the relationships that are betrayed.

On the plus side, the hair and makeup are excellent, as are the costumes. The art direction? Quite handsome. But put together, the movie’s fine craftsmanship is a lot like Margo Martindale, who is in a few scenes as a racist crime family matriarch: we have seen it done before and much smarter on any number of peak TV classics.

There are a few memorable moments—when Moss baptizes herself in the Hudson while disposing of a body and when the great Annabella Sciorra shows up for two scenes as a Brooklyn gangster’s wife who invokes the name of Gloria Steinem. And you can look forward to a single standout performance: Star Wars bad guy Domhnall Gleeson playing a war veteran who returns to the neighborhood to proclaim his love for Moss’s Claire now that she is a prison widow. He is the only character who seems to have an inner life and so his emotions are the only ones that register.

But there is too much talent and promise at play to allow The Kitchen to skate by on such minor accomplishments. The truth is, the film represents a troubling trend in films today, where production and marketing types think they can get by providing shallow examples of things that are popular in the social justice zeitgeist—women being tough-as-nails lead characters, for example—and act like that’s enough.

It’s not. Give us real characters; give us good writing; give us a compelling story. Otherwise, don’t bother. 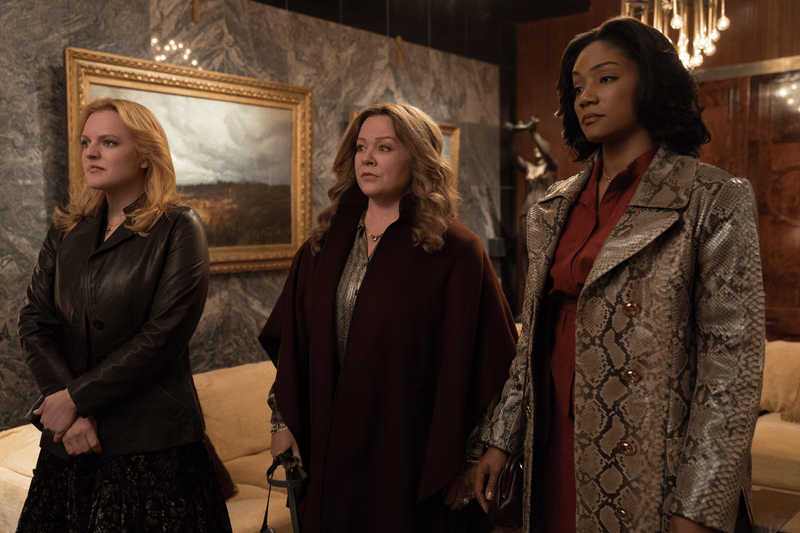