There is already an audience for HBO’s The Righteous Gemstones, a foul-mouthed comedy about a mega-wealthy, world-famous and highly dysfunctional family of televangelists. Created by Danny McBride, it’ll likely be most appealing to fans of his other series: Eastbound and Down and Vice Principals, which also both aired on HBO. He’s known for playing aggressive, quick-tempered characters fueled by anger and toxic masculinity, and who exist in series that have a distinct sense and commentary on the money and desire underneath all the screaming words and rampant destruction.

The Righteous Gemstones is both the same and different. McBride’s Jesse, the son and right-hand man of Eli Gemstone (John Goodman), goes from zero to 60, preferring to yell instead of talk, and is always ready for a ridiculous insult when faced with what he perceives as stupidity. But he’s not broke or trying to claw his way up; he’s already made it, living in one of four mansions on the massive Gemstones compound. As McBride put it at the summer’s Television Critics Association tour, his previous two shows were about people “who believed they were owed something in life” while this one is concerned more with those who already got everything but are still getting destroyed by their own hypocrisy, greed and dysfunction.

At first glance, it’s easy to assume that The Righteous Gemstones will be an incisive satire that pokes fun at an easy target—religion—but the series isn’t focused on ridiculing people’s beliefs. Rather, it uses their megachurch (based on an amalgamation of different religions) as a means to dig into the family drama, and to showcase the hypocritical nature of people who, say, abhor Hollywood but put on spectacles as sermons; who preach about the dangers of greed but have an amusement park on their property. Like McBride’s past efforts—it should be noted that, once again, he teams up with Jody Hill and David Gordon Green who both elevate the show—the flashiness is in the plot, but the real story is within the characters.

Goodman’s as good as you’d expect as Eli, the family patriarch who is trying to keep everyone and everything in check while still mourning the death of his wife Aimee-Leigh (Jennifer Nettles). In a great and surprisingly affecting mid-season flashback episode, it becomes clear that she was the closest the family had to a moral compass, and whose sweetness was able to cut through their acridity. Her presence lingers in every episode, and doubly so through a mourning Eli.

McBride puts in an easy but hilarious performance as Jesse, the eldest son whose future in the church is put in jeopardy when he’s blackmailed by an incriminating video—the plot that kicks off the series. Jesse isn’t all anger; there’s a poignancy to a storyline involving his own wife and children. As always, McBride effortlessly spews his (oft-bizarrely phrased) dialogue, delivered with aplomb (“Because of one son’s actions, the other is a total asshole.”) The youngest brother is Kelvin (Workaholics’ Adam Devine), the desperate-to-be-cool preacher who backflips on trampolines in order to impress the young woman he’s trying to save from Satanism. Kelvin is an easy target—reminiscent of the priest who sits backwards in a chair to “rap about Jesus”—but becomes more nuanced as he tries to prove his worth to the family and compete with his older brother. Rounding out the trio is typical middle-child Judy (Edi Patterson, who is great), who has spent her life neglected and relegated to the sidelines because of her gender and the church’s sexist stance. She’s so desperate to feel like part of the family when, after watching her father smack both her brothers during a brotherly fight, she pipes up and asks for a smack as well. Judy is the most unpredictable character, and an easy favorite.

The Righteous Gemstones starts off a little rough with a one-hour premiere that introduces the overarching blackmail plot and spends time quickly trying to set up all the various subplots (such as the family dynamic and the rivalry with a nearby pastor [Dermot Mulroney], and so on). The second episode is mostly enjoyable but it’s the third, “They Are Weak, But He Is Strong,” where the show started to truly click for me—largely due to the arrival of Eli’s brother-in-law, Baby Billy (Walton Goggins, a standout performance).

Goggins, who previously co-starred with McBride in Vice Principals, fits in this word nicely with his slick white hair, infectious drawl, and slimy con artist instincts. Formerly one half of a performing duo with his sister, together known for a sugary sweet duet will absolutely get stuck in your head, Billy has his own personal agenda that Eli is understandably wary of. (Goggins, along with Nettles, are pitch-perfect in the flashback episode.) But what’s most interesting is how his manipulation eventually leads to a genuine moment of triumph for Judy—and, to a certain extent, Eli as well—one that is depicted in joyous slow-motion, and one that reinforces how the women in McBride’s series are often the hidden heroes of the narrative.

As the show bumps along—I viewed six of the nine episodes—it steadily becomes better and more engaging, easily pulling you into the family antics and its story about greed. It also has wonderfully strange moments, such as a choreographed dance sequence in the name of Lucifer and other little weird asides. Of course, there are a number of moments that don’t work, and some people will be turned off by the general abrasiveness (and violence) of its characters. The episodes tend to hover near 35 minutes, but could certainly benefit from some tighter editing. (Directing-wise, however, Green is as skilled as ever—particularly when it comes to pulling out reaction shots or finding quiet character moments in the midst of big action.) But overall, my qualms are more nitpicky than anything because The Righteous Gemstones is uneven but solid and engaging; I’m already dying to know what happens next. In a way, it’s reflective of the megachurches it skewers: It’s so easy to find yourself dazzled and buy into it completely. 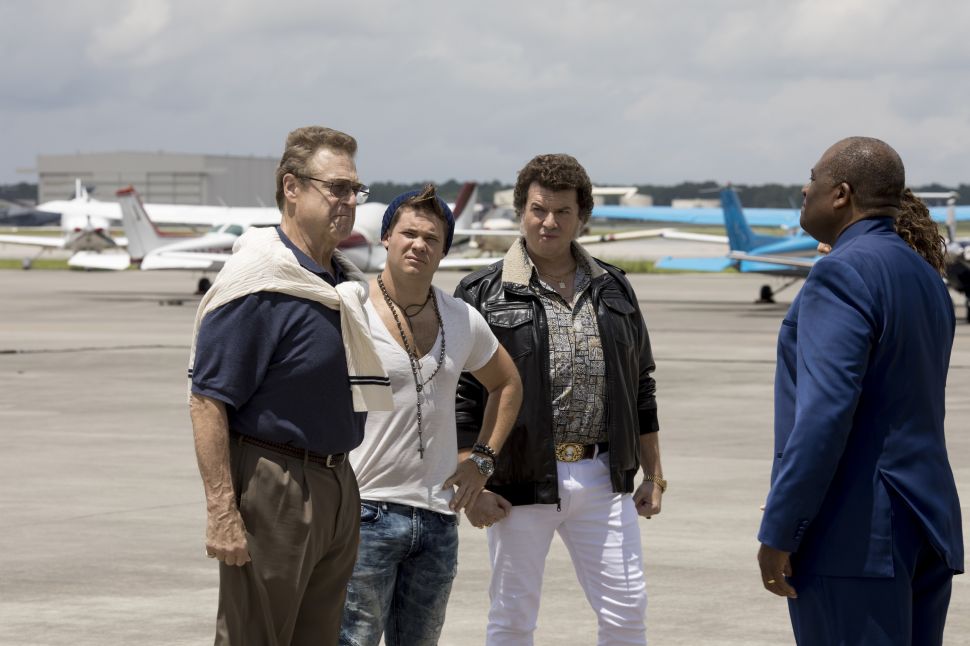