It’s been a rough couple of months for arts institutions located off the West Side Highway. In July, Warren B. Kanders resigned from his position as the vice chairman of the board at the Whitney Museum of Art after months of prolonged protest. In November of last year, revelations that Kanders owns Safariland, a company that sells tear gas used on migrant children at the U.S. border, rocked the museum. A mass exodus of artists withdrawing work from their marquee show, the Whitney Biennial, tipped the scales.

Now, it seems the Shed, a new arts complex in the heart of Hudson Yards, may be going through its own, lower-key crisis. Earlier this month, a boycott of fitness properties such as Equinox, Soulcycle and Blink over owner Stephen Ross’ decision to host a fundraiser for President Donald Trump bled into other investments. The artistic duo who style themselves Zackary Drucker + A.L. Steiner have removed their work from the Shed’s “Open Call, Group 2” exhibition, in protest of Ross’ fundraiser. Ross is the chairman and majority owner of Related Companies, the real estate firm that developed Hudson Yards.

SEE ALSO: For Museum Boards, Age Diversity Is One of Many Issues—Could Nixing Trustee Dues Fix Them All?

“It felt extremely difficult to participate in the exhibition,” Steiner told Observer, discussing the work’s inclusion in “Open Call” and its eventual retraction. The artist cited the six billion in tax breaks Hudson Yards received as a rationale for her hesitation to show her work at the Shed—a massive rebate for the Dubai-like development. The project even received funds earmarked to help eliminate urban poverty. This summer, though, Ross made his business practices impossible to ignore.

Steiner says she hasn’t shown any new work since the election in November 2016—only old and collaborative art. This year, she’s shown her work twice—at the Whitney Biennial and Open Call. Both have been mired in controversy. “It goes to show myself that it’s too difficult for me to participate right now.”

The day after Ross’s fundraiser took place, August 10, Drucker and Steiner asked to have their work removed from the show. The piece is part of “She Models for Her,” a small show within “Open Call” curated by Maryam Hoseini and Phoebe D’Heurle that conceptually frames the work of Suzanne Valadon. A 19th-century French painter known for her heavily proportioned nudes and independent spirit, Valadon provides a fitting touchstone for the participating artists including Emma Amos, Lucas Samaras, Dorothea Tanning and others. In Drucker and Steiner’s piece, Before/After, 2007/2019, several photographs collaged onto a sheet of drywall pair the artists’ nude/semi-nude bodies. They appear as gender outlaws, thwarting typical documentary conventions. In the words of Drucker, who is trans, they aim to “create space/art where we see ourselves reflected.”

I learned about Drucker and Steiner’s decision to pull their work through a wall label at “Open Call,” rather than the more common approach of making a statement about the decision via mass mailer or through the press. The label had been up for more than a week, and no one noticed—an indication of how little press attention the show has received. A democratic curatorial approach to an exhibition assembled through submissions and selected by a panel of experts is supposed to appeal to writers who tire of covering the same artists. Was their disinterest the only fallout from the scandals?

In reality, tourists filled the galleries, and the lone Ross specific protest took the form of Drucker and Steiner’s label. “At a federal level, especially trans people, who are undocumented, people of color, are being legislated against,” Drucker told Observer over the phone. “We are actively having our rights clawed back, and the institutions we are connected to have a responsibility to advocate for us as cultural producers. If they’re not, then we withdraw our presentation because they’re benefiting from our creative labor.”

Nearly every work in the show make a statement about economic, social and gender inequities, reflecting the growing belief within the arts that the country’s social problems must be addressed. Steiner described the Shed’s response to Drucker and Steiner’s request as supportive. However, she felt that the staff, like many other progressives, had limited options for dissent. “It’s difficult to know what to ask for, and how to maneuver inside the ownership or directorships of these places by multi-billionaires who actively support fascist authoritarian policies and political candidates that will implement them,” Steiner explained. “These are real, life-affecting acts of violence, enacted in our name as participating artists in these institutions. So the institutions understand the gesture, but the long-term effect on the collaborators and staff in these institutions is unknown.”

Steiner pinpoints a common disconnect between those who run large organizations and companies in the culture industry and those who work for them. Equinox has long been a leader in socially-progressive causes, championing gay rights and transgender issues well before most would touch it. The Shed’s Open Call exhibition makes this contrast even more pronounced. By comparison, the Whitney Biennial—a show recently lauded for its diversity—looks like a bastion of white privilege. Of the 52 participating artists, curators Tamara McCaw, Emma Enderby, and Solana Chehtman included 43 people of color—83 percent of the show. Women make up roughly half of the show—25 not counting multi-gender collectives. As a commissioning institution, those artists receive between $7,000-15,000 to make their work, placing the artist fee budget alone at between $364,000-780,000.

But if the conditions of this progress mean support of unlawful ICE raids and migrant concentration camps, perhaps this isn’t the reasonable tradeoff people like Ross seem to suggest. “In terms of Trump, there’s good and bad obviously, with anything,” he said in a recent statement. That comment, more than any others, rankled Steiner. “How do we live in a world that equivocates the torture, abuse, and murder of people of color as a policy position and decides what part of it is good?”

Ultimately, Steiner describes the decision to pull the work as personal—an attempt to navigate issues in a way that makes sense for her. “What does it mean to do that and not to have it be a news item?” she asks, acknowledging their deliberate decision not to contact the press. “We know that we’re moving from one story to the next at a moment’s notice. It’s difficult to manifest change by solely getting attention in the short-term.”

And thus, this small action taken within the scope of not organizing other artists, and not reaching out to the press, feels different. It’s not about a larger conversation, but rather establishing a personal code of resistance. That code gives individuals the power to decide what conversation will be had, and on what terms. Most importantly, though, it offers a more granular approach to the business of avoiding contribution to a depraved billionaire’s legacy. 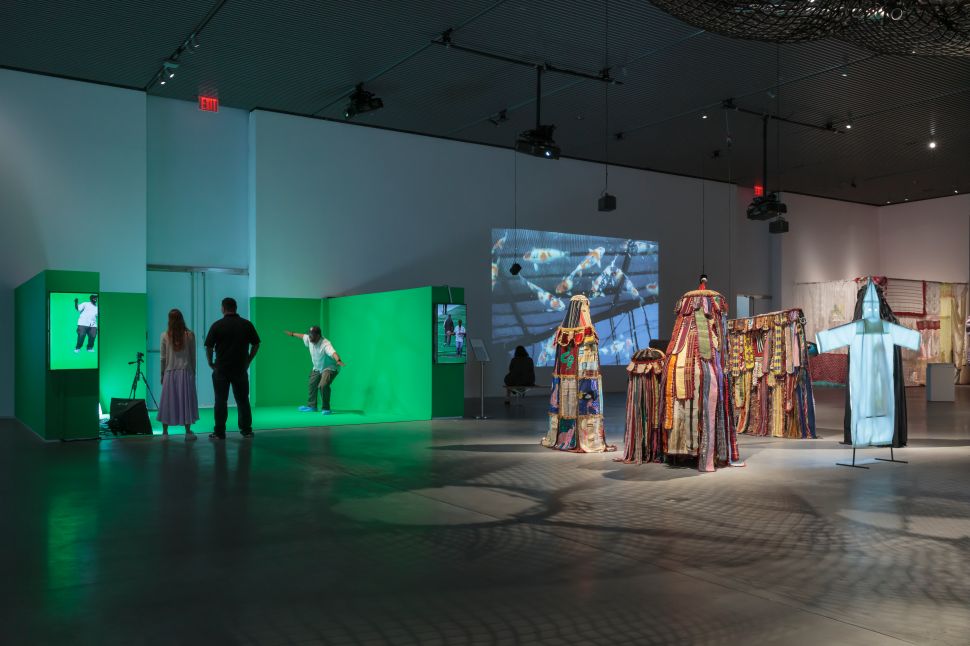