Fourteen years ago, New York Times columnist Thomas Friedman’s book, The World Is Flat: A Brief History of the Twenty-first Century, became an international bestseller. The book, published in the aftermath of the burst of the “dot com” bubble in America, analyzed the trend of globalization that Friedman predicted would break down all barriers in the cross-border exchange of goods, services and knowledge.

Fast forward a decade later, however: while we are still in the early phase of the 21st century, the world we live in today looks everything but “flat.” Quite the contrary, world leaders, particularly those of the U.S. and China, are raising the barriers of trading goods and services, curbing competitors from advancing their technologies while exacerbating the ideological divide between their own people and those of others.

What does the Pulitzer-winning world affairs commentator make of all this? In an opinion piece last week, Friedman identified the key force forming over the past decade which has driven the U.S. and China into an ugly war about trade, tech and politics today: China no longer wants to sell the same types of goods it has been selling to American for decades.

“For the first three decades [of China’s economic opening], U.S.-China trade could be summarized as America bought T-shirts, tennis shoes and toys from China, and China bought soybeans and Boeing jetliners from America,” he went on to explain. “And as long as that was the case, we did not care whether the Chinese government was communist, capitalist, authoritarian, libertarian or vegetarian.”

But over the last 10 years, China gradually grew capable of making more sophisticated products. In 2015, China’s President Xi Jinping, who took power in 2012 and is set to stay in power indefinitely, laid out a 10-year plan called “Made in China 2025” that aims to make China a world leader in manufacturing high-tech products, such as computer chips, software, 5G networks and robots.

Friedman characterized these new products China wants to export as “deep technology” that can “get embedded into your infrastructure, your factory and your community” and potentially be used to tap American society for intelligence or malicious purposes.

“Our relationship with China is very different from the one we had with the Soviet Union during the Cold War,” Friedman explained. “We were not economically and technologically interdependent with the Russians. We are with China. And now that China can get as deep into America as Apple is into China, the difference in our values—China is a nontransparent communist society, and ours is a transparent democratic society—starts to matter.”

In that context, Friedman pointed out that both China’s President Xi and President Donald Trump have gone too far in seeking a peaceful solution. Notably, the ongoing tit-for-tat tariff war (which has recently devolved into a currency war) and the U.S.’s heavy penalty on Chinese tech giants have hurt both economies badly and don’t leave either side much room for a decent way out.

“If President Trump and President Xi Jinping don’t find a way to defuse it soon, we’re going to get where we’re going—fracturing the globalization system that has brought the world more peace and prosperity over the last 70 years than at any other time in history,” Friedman warned. 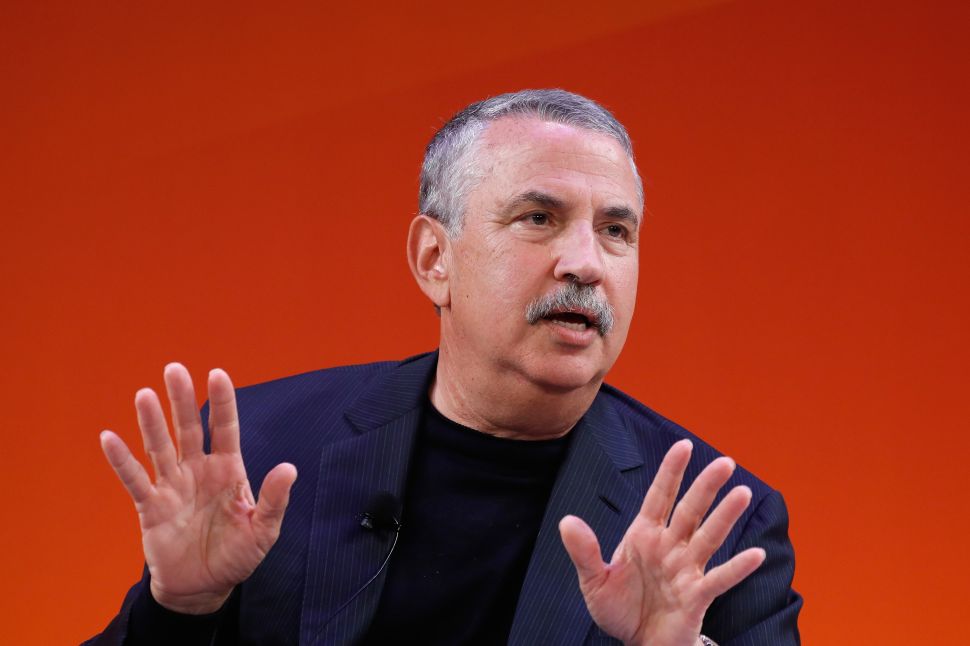