Hollywood movie audiences this summer were dazzled by “E.D.I.T.H.,” the AI (artificial intelligence) computer sidekick that helped Spidey battle his European foes in Spider-Man: Far From Home. But most of us would settle for a smart computer that could just get our drive-thru order right, right?

That’s where “Holly” comes in—as a means to revolutionize the fast food industry, the same way Alexa made waves by answering everyday questions.

Holly is the product of Valyant AI‘s CEO and founder Rob Carpenter, a self-described “geek at heart” who tinkered with websites and computers during high school in a tiny Alaska town, moving on to a graduate degree and studies in entrepreneurship. Now, he’s conjured up Holly, a proprietary artificial intelligence conversation platform for enterprise. He recently took the time to chat with Observer about his dynamic new product.

According to Carpenter, Holly has the edge on human employees at fast food restaurants because she’s faster, never gets tired, is always cheerful and upsells much better. Humans struggle to multitask and don’t always like taking orders from customers. “The turnover rate is 200% to 300% per year,” he added. “In fact, there are between 800,000 and 900,000 open positions in fast food today, creating a huge shortage of workers. Holly would fill that gap. She won’t leave you to work across the street, but her clone cousin might.”

So why can’t Alexa take your order? “Consumer AI handles so many questions, and the variability for consumer AI is infinite, but it’s hard to have a conversation,” Carpenter explained. “This type of AI is wide, but not deep.” However, it’s a different story for enterprise AI.

“But Holly is simple in nature. We did not go wide, but we went deep in one industry. It’s our sole focus. This system can juggle multiple items: burger and fries, no salt, and a drink… added, added, modified and added.”

As he said this, I thought about a fancy McDonald’s near Fenway Park in Boston that I visited with my son, which had a kiosk inside that resembled an ATM, only it took our order and charged my bank card. Why couldn’t we have one of those outside for drive-thru customers?

“Only about 25% of fast food orders are in-store,” Carpenter revealed. “Another 5% is for mobile orders, like Uber [Eats] and GrubHub. The other 70% or so comes from drive-thru. Holly can process orders faster than kiosks, while typing can be three times slower. Cars will back up, leading drivers to search elsewhere for faster food. It may take a while to search the kiosk for a product, which might have been discontinued, whereas Holly can tell you that information faster than you can find it.”

Additionally, he contends that kiosks can be dirty. “A study showed that kiosks can have several times more germ colonies than airplane toilets,” he said. But hey, bacteria’s part of our culture, right?

When I pitched the concept to my high school aged daughter, her first concern was about Holly replacing workers; what would those workers do? Carpenter reminded me about how woefully understaffed the industry is. “It’s a house built on sand, but Holly provides stability for the industry. Besides, the workers like her.”

“Taking orders isn’t a job they like. You’re on your feet for eight hours, talking to hundreds of customers, with bosses pushing you to upsell, and having to deal with cranky customers sometimes,” Carpenter explained. “With the ability to automate, the workers can focus on making and serving the food, and processing the payments. They get a friendlier reaction from the customers.”

But what about the future for youngsters, like my daughter about to enter college, or older folks looking to join the industry. Will the Hollies of the world take over more and more of our jobs?

“Technology is eating the world,” Carpenter admitted. “Tech is important in every company, as most companies will be tech companies. Even Uber and Lyft. Those who can work it can succeed.”

We swapped stories of medical records jobs we had both taken. In my case, I had to alphabetize hundreds of folders at the hospital where my dad was a doctor, while Carpenter had a job sorting mail at the medical establishment his mother, a nurse, worked at.

“Health care records-keeping will be automated,” he projected. “AI can solve a lot of brute force problems but is horrendous at big picture subjects like strategy, creativity. Automation will take care of repetitive tasks, as getting rid of redundancy improves interpersonal interactions.”

Non-Artificially Intelligent Advice About Getting Started

So, what advice does Carpenter recommend for getting startup capital to build a product like Holly?

“Do your basic market research,” he said. “Have a good understanding of the value of the product.  Talk to companies and get some feedback. Make sure you don’t have a bunch of companies do the same thing. Get to that ‘proof of concept,’ self-funding or get into the friends and family realm for this.  You want to stand out from other companies that they speak with. Momentum… value… it’s real and can help you raise money. Those who struggle have a vague idea, no feedback, no research or talk with customers.”

Carpenter credits the importance of “testing a hypothesis” in this process. “We all have assumptions, and just assume others feel this way. Test those assumptions quickly and easily,” he continued. “We assumed things about customers, but had to test it first. We designed Holly to answer questions about the menu’s nutrition, but our tests showed that hardly anyone asked about the nutritional value of the meal.”

By next year, Holly could be taking your order from a fast food restaurant near you. 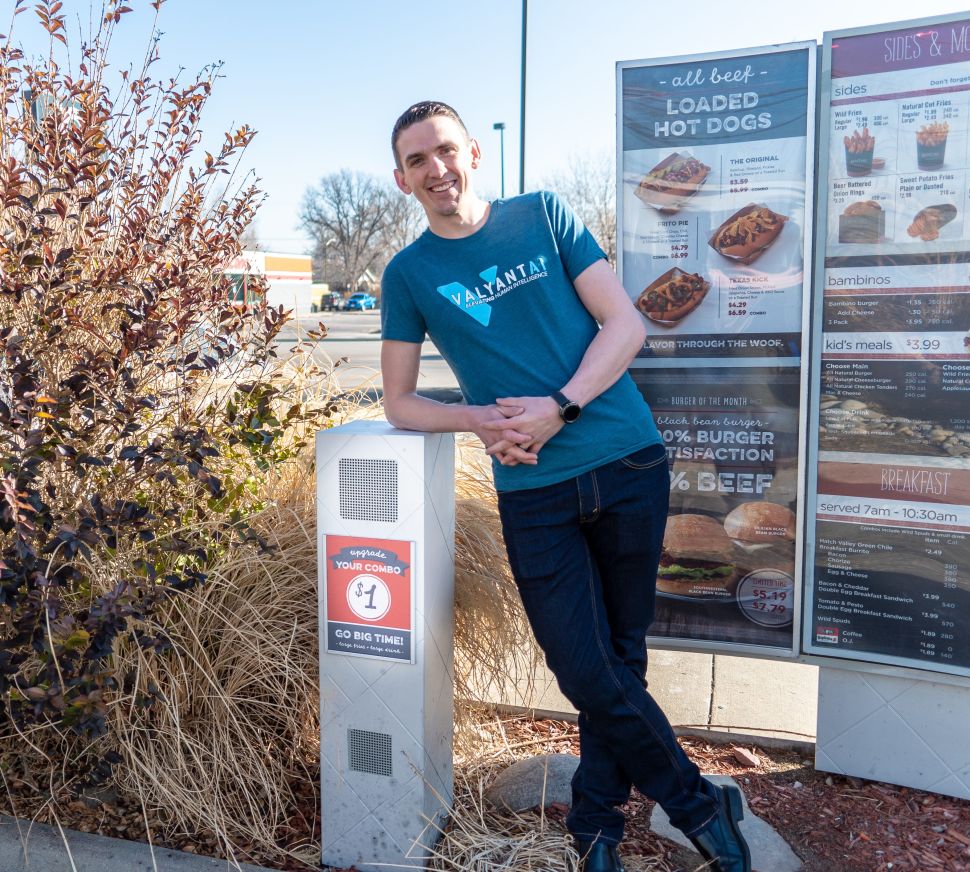