The ten years between 1925 and 1935 in which aristocrat and author Vita Sackville-West carried on an affair with Virginia Woolf are considered by scholars and literary critics to have been the peak of both women’s careers. Woolf based her novel Orlando—about an Elizabethan nobleman who lives for four centuries, miraculously changing sex from male to female—on Sackville-West, whose popular novels published by Woolf and her husband’s Hogarth press helped to fund Woolf’s more experimental writing.

British director Chanya Button’s second feature revisits this fruitful but turbulent affair. Based on Eileen Atkins’ original stage play, Vita & Virginia stars Gemma Arterton as Sackville-West and Elizabeth Debicki as Woolf, with Isabella Rossellini in the supporting role of Lady Sackville. It premiered at the Toronto International Film Festival last September and arrives in select U.S. theaters on August 23. Ahead of the release, Observer spoke with Button about bringing the story of these literary icons to the screen.

Observer: Do you remember your first exposure to Virginia Woolf?
Chanya Button: I was first drawn to her essays, in fact. She wrote an amazing essay called “On the Cinema,” and it’s one of the things that inspired me to become a filmmaker. She wrote…about the birth of film and how it was a new art form and how this was an amazing technology that would allow people to reflect on human existence in a new way because it was the first time we would be able to look at ourselves truly objectively.

So, from my very first experiences of her writing she seemed like an incredibly progressive thinker and someone who was revolutionary for her time. She questioned everything and reflected on everything in a number of her essays. And I moved on from her essays to reading Orlando and Mrs. Dalloway. Just the way she subverts everything, from the way her characters think to the social mores they live by to the very form in which she writes, she was just such a visionary for her time.

And in her essays—A Room of One’s Own being something that anyone who love literature can be relied on to have read—it really feels like she’s calling out to you, as a young woman, to empower you from the past.

Do you think of this film as being in conversation with films like Sally Potter’s Orlando and Patricia Hodge’s Portrait of a Marriage?
Yes. I would really love for Vita & Virginia to sit alongside Sally Potter’s Orlando and Stephen Daldry’s The Hours. I’d love it to sit alongside other films that examine her life and work. I’d love for people who’ve watched and loved those films to watch Vita & Virginia as well, because I think Virginia Woolf and Vita Sackville-West were such complicated, brilliant, inspiring women. But no one piece of work can capture who they were.

Tell me about casting your Vita and your Virginia. What were you looking for in the actors who would portray them?
Gemma Arterton was an executive producer on the project and brought me the initial script that Eileen had adapted from her own play. And Gemma had such an understanding of Vita Sackville—West, her essential unknowability, her sense of adventure and her sensuality and sexuality. Gemma had such an affinity with Vita that she kind of taught me about her.

And then we went on a real journey looking for our Virginia. Because, you know, Vanessa Bell, her sister, painted a number of portraits of Virginia and none of them have a face. They’re all these impressionistic portraits that even her own sister distilled this essential unknowability in the portraits. So if even your own sister can’t quite pin you down, then it becomes a challenging role to cast! But I think what Elizabeth really captured was the fact that Virginia’s vulnerability was also a profound strength. I think a lot about how we portray particularly female fragility on screen, and how two-dimensional I found that growing up. That that made someone weak or in need of protection. Whereas there’s brittleness and a raw kind of feeling to Elizabeth’s performance, but you certainly don’t think she’s crying out to be looked after. Her fragility and her vulnerability feels quite productive and explosive.

For me it was Elizabeth’s unique understanding of how to bring Virginia Woolf’s particular blend of vulnerability and creativity to life, her instinctive understanding of that is what made me excited to work with her in the role.

You adapted the film from Eileen Atkins’s play. She is probably Hollywood’s greatest Virginia Woof stan. What would you say is the most significant insight you got from her about Woolf?
It’s really interesting, no one’s asked that. What was amazing about working with Eileen is that we really distilled the story we wanted to tell and focused on this moment in Vita and Virginia’s relationship that was the inspiration behind Orlando. Eileen was particularly generous in not imposing her ideas about Woolf on me or on the film, and really empowered me to come to my own conclusions both about the film I was about to make and about Virginia Woolf as a woman.

These are literary icons who loom over us from history. Academics and people who were connected to them through family connections or through their work can feel a tremendous sense of ownership over them, and talk about them as if they’re still alive and talk about them as if they’re in the room. And Eileen rarely did that. We interpreted her work together. I spoke to Eileen about her experience playing Woolf and how she brought the role to life when she played it on Broadway with Vanessa Redgrave. So, the thing that most inspired me was how Eileen  really let have my own relationship with this woman’s work.

In the film you use these creeping CGI vines to represent Virginia’s…anxiety? Where did that imagery come from?
It comes from the pages of Orlando. I wanted to create moments in the film where we kind of slip out of reality in the way that Virginia Woolf, as we read in her diaries, is experiencing the kind of emotional and psychological challenges that she went through. There were moments when she felt a kind of disconnect, and I wanted to bind up her vulnerability with her creativity and show that there are these moment where Vita is really inspiring her. Those are the moments when she really disappears into her imagination. They come from the desire to really give an insight into what it must be like to be inside the mind of someone who is as profoundly brilliant and creative as Virginia Woolf. 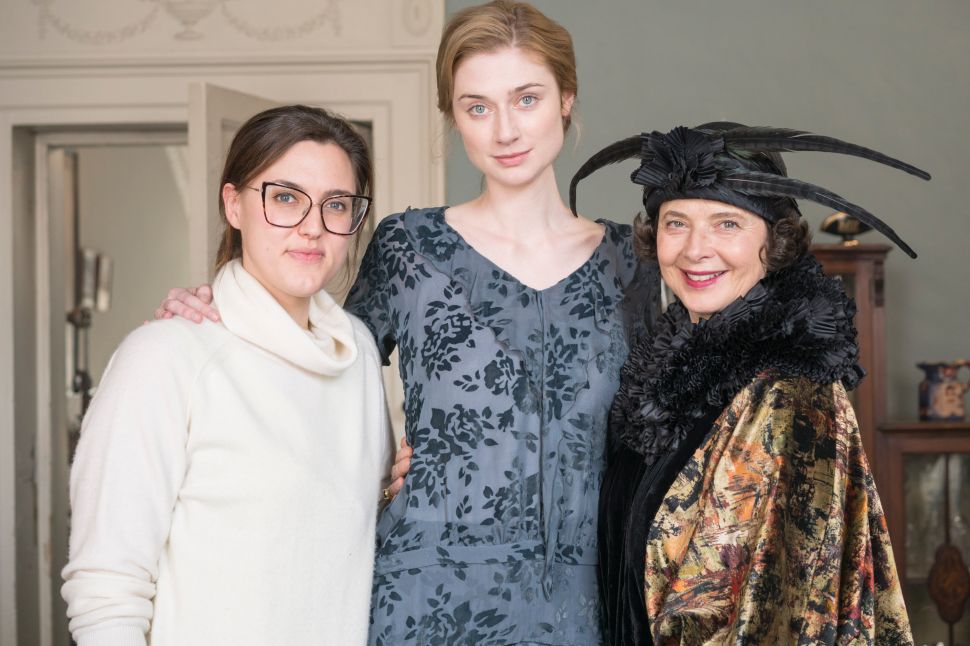