September can be a pretty sleepy month for the art industry, but this year proves the exception. Between the mass openings in Tribeca earlier this month—the new neighborhood for middle tier galleries—and Pace’s christening of their 75,000-square-foot space, the city’s art scene has rarely felt so alive. It’s a great time to see art.

The following four shows stood out, not just for their craftsmanship and historical grounding, but for the sheer volume of conversation I’ve seen them generate.

The male spirit is alive and well at Jeffrey Deitch. Two exhibitions, Keiichi Tanaami on Grand Street and “Tokyo Pop Underground” on Wooster Street, juice pop culture and underground art and music scenes by bringing together work from the 1960s through to today inspired by sex, war and skateboards. Expect to see a fantasy world of male desire made up of naked female robots, titillating anime depicting young girls wrapping their legs around bobblehead-shaped men, and dizzying collages of nude women pictured throughout the ages.

Normally, teeming testosterone like this leads to boring art, but the historical perspective and craftsmanship of much of the work on display makes the show impossible to dismiss. Curator and Tokyo gallerist Shinji Nanzuka describes the work in the show as “representative of the idiosyncratic nature of Japan.” The art world initially rejected much of it for its commercial qualities. Meanwhile, artists pushing against mainstream Japanese culture, like Keiichi Tanaami, Harumi Yamaguchi, Hajime Sorayama and Toshio Saeki, used sex and violence in their work to make anti-authority and anti-uniformity statements. Only now, after decades of Nanzuka advocating for their work, do these artists have an established place in the market.

Work driven by male desire suffers from uniformity too, though, so this tactic doesn’t always work. Yamaguchi’s realistic drawings of sexy women in role play offer a prime example. While Yamaguchi identified with the sex-positive feminism of the 1970s—a point no press release ever fails to mention—the actual images aren’t any different to Playboy Halloween costumes. Better are Sorayama’s Metropolis-inspired femme bot clones, which at least do the work of imagining a future, as fucked up as it is. In this case, they present the male fear that all women are the same evil yet irresistible woman who will destroy civilization.

Keiichi Tanaami’s solo show at 76 Grand offers a similarly bleak picture of women, though in this case, the context in which they’re depicted tells a more complicated story. Inarguably a painterly masterwork of texture, detail and line, the centerpiece of Tanaami’s show combines skulls, war-time spirits, technology, and World War II bombers into a mandala-like shape. Up close, the variation of texture and effortless brushwork dazzles the eyes, while at a distance, the piece materializes into a genuinely creepy depiction of the ego and hubris that infects nations in conflict. A woman’s body bound and naked lies in the . It’s not pretty, but there’s at least no glorification here. Male misogyny is as ugly as war itself.

Most people know painter Amy Sherald for her masterful presidential portrait of Michelle Obama. After returning from a four-year art-making hiatus due to a heart transplant and family illness, the picture was her first major commission and exhibits none of the personal trauma suffered. It speaks only of the first lady, and hangs at the National Gallery, permanently on view for all to see.

Now, after two years spent in the studio, viewers have the opportunity to dive into Sherald’s work at Hauser & Wirth. And what a show. Consisting of only eight paintings, the spare gallery offers plenty of space for the meaning and emotion imbued in her portraits. Taken as a whole, the central message from the figures in this show seems to be one of generosity and shared experience.

Sherald’s signature style—a neutral grayish skin tone usually backed by a single monotone color—underscores the figure’s importance. Often, they resemble people you might know. Girl Next Store, an image of a plump African American woman in a white dress covered with colored polka dots, looks like a friendly neighbor. So does Handsome, a painting picturing a young man wearing a blue shirt with small white polka dots. Sherald smartly positions the two across from each other in the gallery.

The show’s most impressive painting, If you surrendered to the air, you could ride it, situates an African American man sitting on top of scaffolding. Based on Charles C. Ebbets’ iconic 1932 photograph picturing a white man sitting on top of steelwork hundreds of feet in the air, Sherald alters the pose slightly. Rather than looking into the distance, this figure looks at the viewer, as if ready to strike up a conversation from a stage. The backdrop is nothing smaller than the world.

Every image in Alex Prager’s exhibition at Lehmann Maupin, “Play the Wind,” feels vaguely familiar. Her photographs transform art historical references, postcard iconography and movie posters into an uncanny mash of stock Hollywood characters and sets.  The eight-minute video from which the show draws its name uses the same techniques but stands apart from all else.

Using a narrative structure akin to a dream, Prager’s characters, move effortlessly from one set to another. Played by Dimitri Chamblas and Riley Keough (daughter of Lisa Marie Presley), the two protagonists visit a county fair and drive by a brutal car accident. In one scene, Keough falls from the sky into a lush green forest.  Prager doesn’t bother making connections between these vignettes—only the visual links. No dialogue exists.

A sense of déjà vu permeates the whole piece but starts with the casting of Keough, who not only looks just like her mother but the actress Kristen Stewart. Streets lined with same-named businesses add to the confusion. The only differences between these neighboring businesses are their logos.

At the same time, much of the work is a monument to the individual narratives of secondary characters. In the image Welcome Home, drawn from Prager’s movie, close to fifty characters roam the city square. None pay attention to the individuals around them. They are too wrapped up in their affairs to notice.

Each time I look at this image, I notice something new—the cat in the air, the lady with the nose job, the guy with the blow-up doll. I nearly missed the self-referential mural of a seated audience poised to watch the fair events unfold. As a viewer, I’m just a half step removed from Prager’s mock audience. By her next project, I expect we’ll be fully integrated. I, for one, can’t wait. 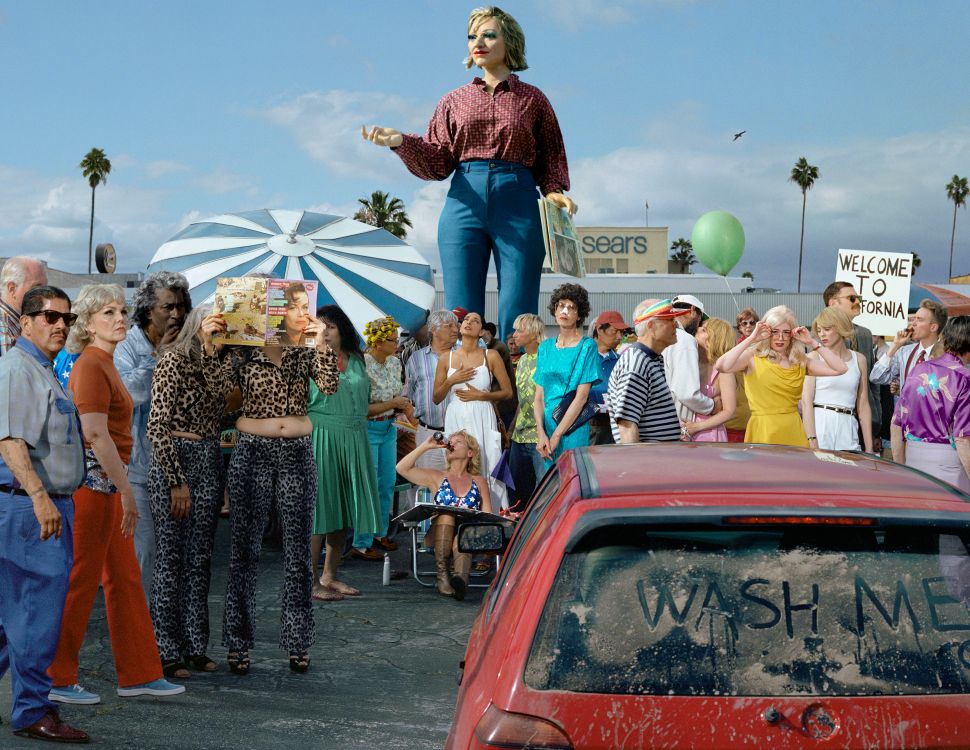