Earlier this year, I published a book called The End of Killing. It examines how new technology can help us end violence, with a focus on premeditated killing by firearms.

Shortly after it debuted, my publisher ran ads for the book on Amazon. A few weeks ago, we discovered that Amazon blocked the book’s ads after the mass shootings in Dayton and El Paso.

Why? Because the cover has a gun on it. 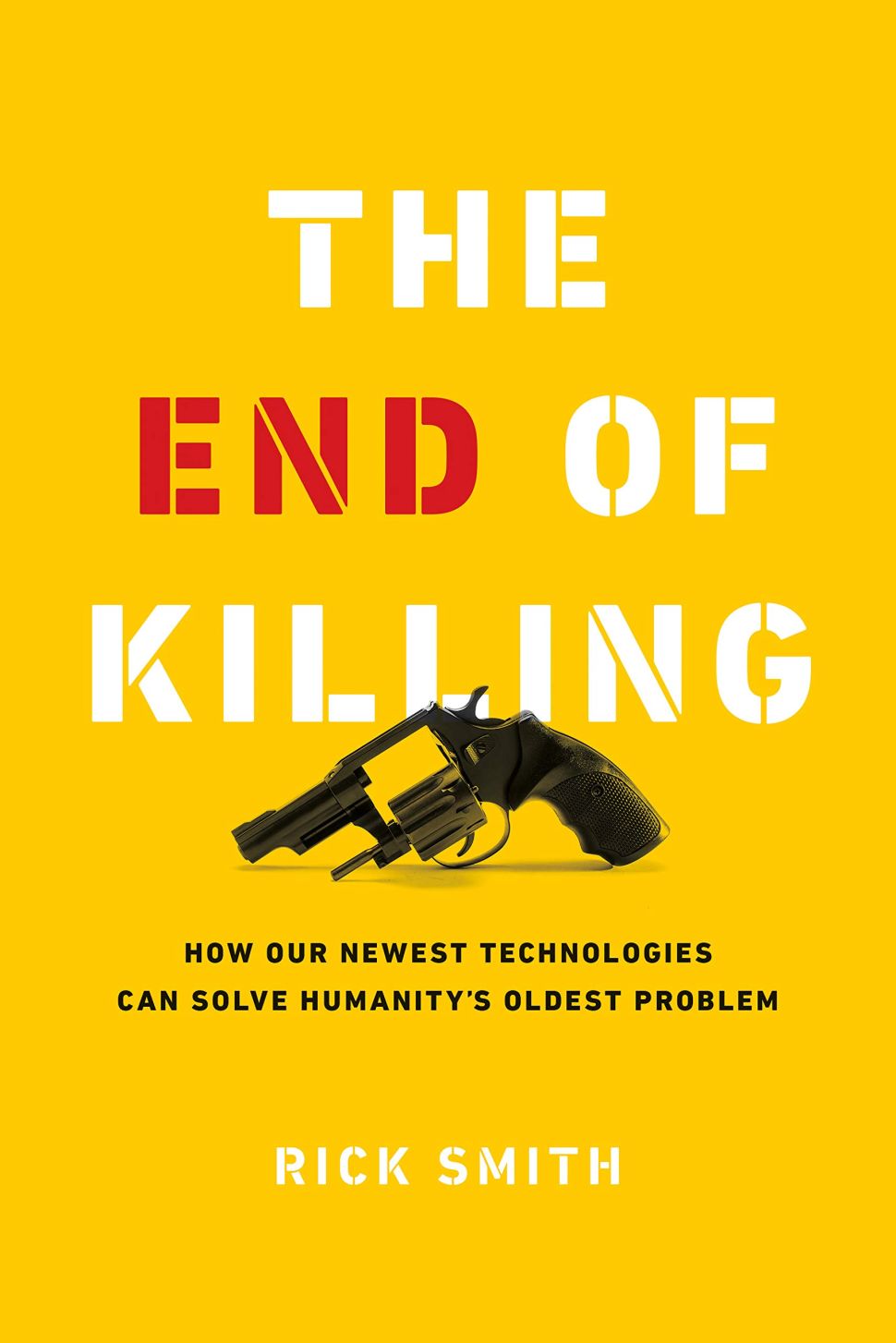 Further, they said they’d reinstate the ads only if we revised the cover. Here’s the note from Amazon’s legal team:

If approved with changes, the following changes must be made: This book cover is blocked at the moment due to the critical event policy that was activated 8/4/19 following the mass shootings in the U.S. We would be happy to revisit the ad after 8/12/19, but the cover image will not be approved as-is. An updated ad would need an image without a gun.

I was confused. The book’s thesis—indeed, my life’s work—is how we can end deaths by firearms. The book doesn’t promote guns. Far from it. In fact, my prime argument is that the lethality of firearms is a problem, but one that we can fix. And yet, Amazon wouldn’t allow us to promote those ideas in the aftermath of a deadly event that demonstrated the dire need for them.

Here’s why this ad ban is especially odd: Amazon hasn’t exactly gone out of their way to avoid selling gun-related items. Type “guns” into the search bar, and here’s the result: 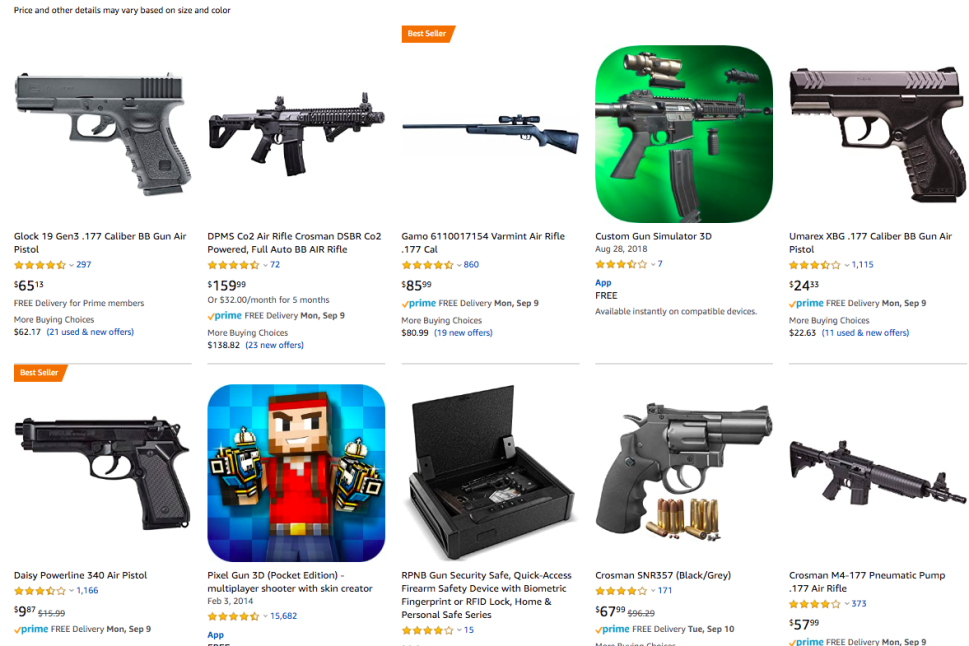 Dig deeper, and you’ll discover that while Amazon doesn’t sell lethal firearms, they do sell ancillary products. I found this one especially ironic. 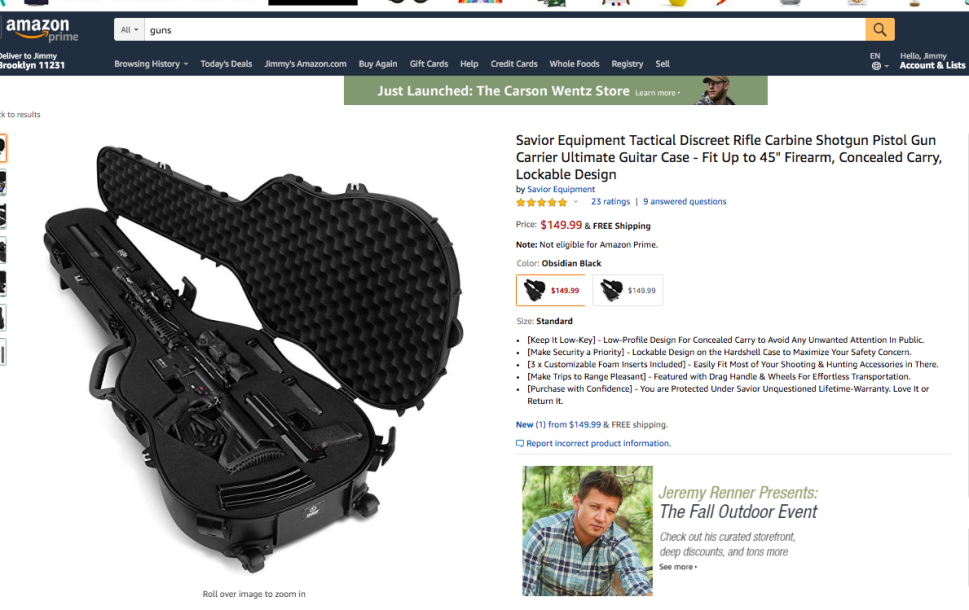 Yes, this is exactly what you think it is: a gun case shaped to look like a guitar case. It sports a “Low-Profile Design For Concealed Carry,” which is helpful if your goal is “to Avoid Any Unwanted Attention In Public.” To be fair, gun cases and air pistols aren’t regulated deadly weapons, but the fact that Amazon sells these items—while, I assume, blocking ads for them?—suggests that their “no gun ads” policy is contradictory at best and hypocritical at worst.

I’m not trying to play “gotcha” with Amazon. The company is trying to respond with sensitivity after a national tragedy while at the same time not upsetting millions of their customers, including gun owners. That said, the decision to block ads—and, let’s just say it, literally judge books by their covers—is a PR move. The “critical events policy” makes for a convenient talking point, so that, in the aftermath of something like a mass shooting, executives can say, “see, we banned ads!” and move on.

Amazon is not alone. Much of the tech world’s response to gun violence has been to ban advertising for both lethal firearms and less-lethal alternatives. Google has done that; Facebook has joined in as well. At first glance, that might sound reasonable—less gun advertising could mean fewer gun purchases and therefore less gun violence. But is it that simple? Did the tech platforms ban these ads after rigorous research into the connection between gun advertising and gun violence or simply as a means of attracting some good PR? I strongly suspect the latter. Will weapons sales drop if Amazon stops allowing weapons ads? Will gun buyers put their guns away in response to a Facebook policy? I’m doubtful, but more to the point, I don’t think the companies themselves know the answer.

What’s more, advertising can be a powerful force for social change. Advertising doesn’t just tell us about new products on the market; it shapes what we want, what we consider desirable and what we consider normal. Think of Apple’s revolutionary ads for the Macintosh and then for the iPod, which convinced millions of us that personal computers and portable music players were not just for the technologically sophisticated, but could improve life for everyone. Or think of how advertising across industries has increasingly foregrounded multi-racial or same-sex families, reminding us that there are many ways to be a normal, loving family.

Imagine an alternative case. Imagine if Facebook and Google sought to address climate change by banning ads for cars—all cars. This would obviously be ineffective. Neither the rate of cars purchased nor of cars produced would change. Outlawing those ads could also be counterproductive. It would prevent companies from promoting new vehicles, such as hybrids or all-electric cars, and a powerful force to shift consumer tastes in a direction that could help address climate change would be lost.

Advertising can and does change our world, and that includes advertising for weapons and personal safety. To achieve critical mass, less-lethal weapons or advanced technology like “smart guns” need an educated public aware of the existence and benefits of these products. That’s the only way they can challenge old incumbents and meet public demand for safer weapons. I don’t think that an ad ban from Amazon, Facebook, Google or others will affect gun sales, because, simply put, the public already knows what a gun is and how it works. But I do believe that many people who might have researched and bought a safer alternative are currently unaware that these alternatives exist and continue buying guns as a result. By ending all weapons advertising—lethal and non-lethal alike—the tech platforms are cutting off the chance to reshape a hidebound industry.

Amazon’s decision to ban ads for my book was well-intentioned but misguided. It holds back the spread of new ideas, including ideas about how technology can reduce violence. More broadly, their and others’ decisions about advertising speak to how Silicon Valley had turned its back on tough topics like gun violence. Technology companies have a major, transformative role to play in making our world less deadly. And frankly, it should disappoint all of us to see them shirk that opportunity—and ban advertising as a way of making it appear like they’re doing something. 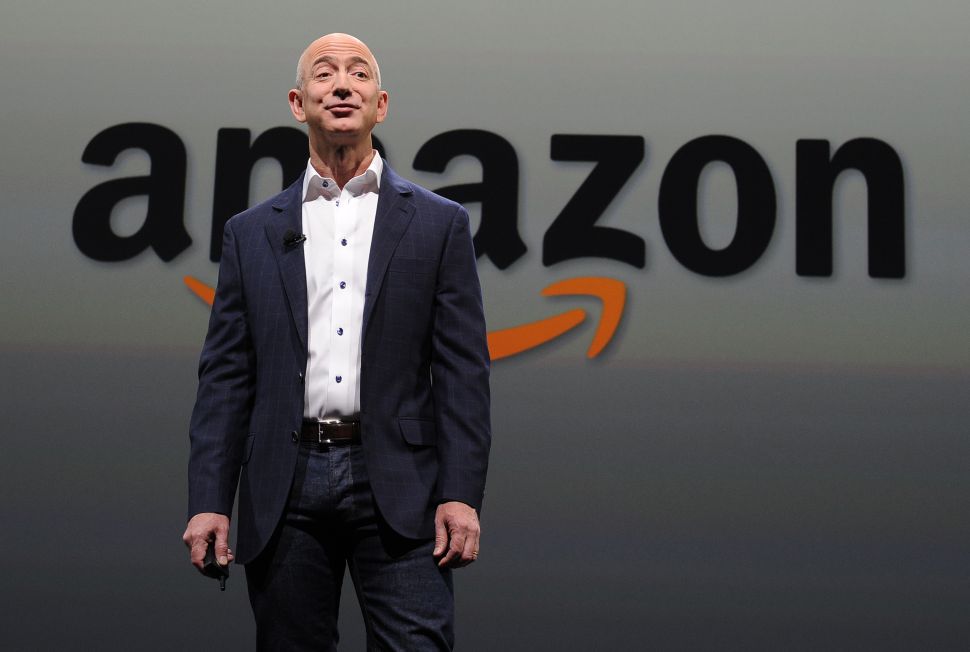