Dorothy Hamill, Kareem Abdul-Jabbar, Muhammad Ali, Chris Evert, O.J. Simpson, Pelé, Vitas Gerulaitis, Tom Seaver, Jack Nicklaus and Willie Shoemaker: what do all these athletes have in common? No, it’s not the achievement of some kind of feat of strength. Rather, all were painted by Andy Warhol as part of his “Athlete Series,” and all will be on sale throughout November at Christie’s, selling in separate lots along with a selection of paintings, drawings, works on paper and sculptures from the collection of Richard L. Weisman.

The ten portraits range in price from $200,000-600,000, with the exception being the image of Ali worth an estimated $5 million. The series was commissioned by Weisman, son of legendary art accumulators Fred and Marcia Weisman, (the subject of David Hockney’s “American Collectors,” at the Art Institute of Chicago). He also happens to be nephew to Norton Simon, founder of Pasadena’s Norton Simon Museum. Overseeing the sale at Christie’s is International Director of Post-War and Contemporary Art Sara Friedlander.

SEE ALSO: What Happens When Collectors View Art as Just an Investment

“You have a series that comes from the original owner, and there’s this amazing commission story, they’re completely fresh to the market. They’ve never been up before,” she told Observer about the 10 Warhol portraits. Weisman, in fact, commissioned eight sets of the series. Two were donated to universities, while one was at the center of a mysterious heist in 2009, when they were stolen from Weisman’s home. Christie’s confirmed to Artnews those works had eventually been returned, but the circumstances under which they were recovered are unclear.

Warhol photographed his subjects on his Polaroid Big Shot camera then conjured the final likeness through a process of acrylic and silkscreen ink on canvas. The works eventually found their way into magazines and billboard promotions for a variety of products. “The sports stars of today are the movie stars of yesterday,” the artist later said. Friedlander noted of the time they were made, “It’s this moment in American culture where they become icons, where Muhammad Ali becomes as important as Marilyn Monroe, and this idea of celebrity status for these athletes.”

“Pop is still the movement that everyone’s after,” is how she views current market appetites. “On the heels of the Warhol exhibition at the Whitney, where these late seventies portraits and the continuing fascination with celebrity really engaged a broader audience, it’s what’s hot right now.”

Streaming through Christie’s New York throughout the fall and into 2020, the eclectic collection will be offered in a melange of categories including Post-War & Contemporary Art, American Art, and Latin American Art, as well as an online sale of Picasso Ceramics. Events in 2020 will offer works in the categories of Modern British Art and Photographs.

Norman Rockwell’s Harvest Moon, a sentimental cover illustration painted in 1920, is expected to fetch an estimated $1-1.5 million while his Red Head, painted 20 years later, a stunning near monochrome illustration of a woman cradling a baby with faded pink and white roses at her feet, is expected to draw a more modest $700,000. Bringing up the rear is the artist’s Laughing Boy at around $200,000.

In addition to Warhol and Rockwell, there are works by James Rosenquist, Peter Beard, Tom Wesselmann, Alberto Giacometti, and Roy Lichtenstein among others, with expected sales totaling around $15 million.

To Friedlander, what sets the collection apart from others is the mix of father Fred Weisman’s taste, from whom many pieces are inherited, and son Richard’s own sensibilities, combining masters from 1950 through 1970 with kitschier items. “Richard, much like Warhol, didn’t see the hierarchy of fine art or illustration or modern versus contemporary,” explains Friedlander. “It was all brought together in this very cool social world of art and sport and entertainment and the collection really relates that.”

Update: A spokesperson from Christie’s confirmed to Observer that the FBI recovered the stolen “Athletes” works in 2015. 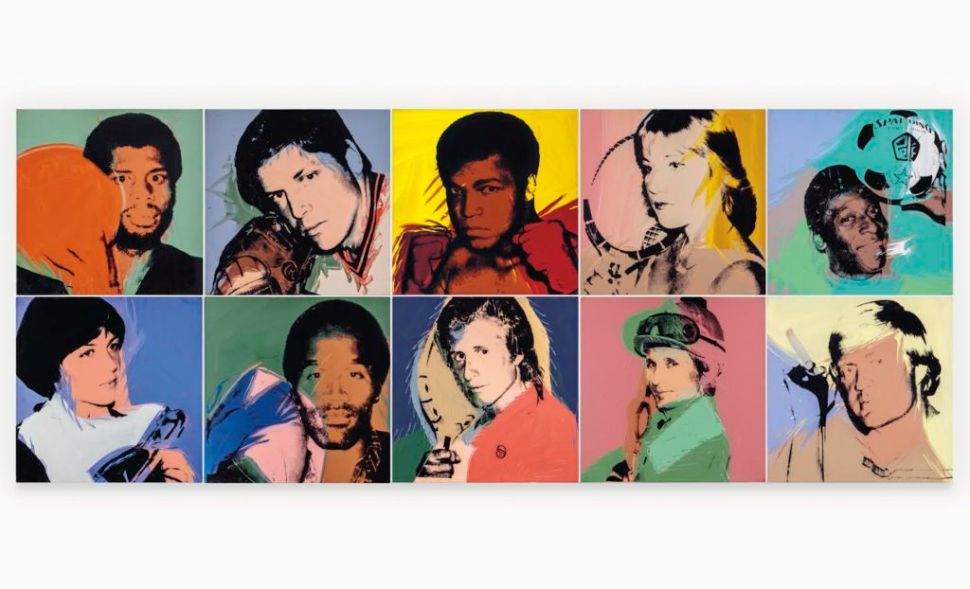