When author, chef, television host and beloved culinary provocateur Anthony Bourdain committed suicide in 2018, the world’s outpouring of profound mourning was close to unique in terms of collective reactions to untimely celebrity deaths. Bourdain was not simply a lucky guy resting on the laurels of his smash-hit book career, but a dogged world traveler obsessed with shining lights on issues that weren’t receiving sufficient attention. In 2017, Bourdain even took Parts Unknown to Antarctica to check out what kind of cuisine climate scientists were sustaining themselves with. On Monday, the New York Times reported that a collection of some of Bourdain’s accumulated belongings will be auctioned off this fall by professional appraiser Lark E. Mason; a sale that should provide rare insight into Bourdain’s personal collection of meaningful items.

It’s difficult to take stock of Bourdain’s personal collection without feeling intrusive, because the man was so selflessly focused on providing great care and services to everyone except himself, and this comes across in the modesty of his own belongings. Nevertheless, it shows Bourdain had domestic style in droves: he apparently told his personal assistant he wanted his apartment to feel like the notorious Chateau Marmont of West Hollywood. He collected art by John Lurie and Ralph Steadman, and accumulated works of midcentury modern furniture by Peter Lovig Nielsen.

SEE ALSO: How Toshihiko Hosaka Made the Image on ‘Time’ Magazine’s Climate Change Cover Out of Sand

Perhaps the most prized item on the lot is Bourdain’s beloved “steel and meteorite” knife, which was made by Bob Kramer. “He walked right to the bar and he was like, ‘Oh man, I’ve been looking forward to this,'” Kramer told the Times of his handing off of the knife to Bourdain. “He held it, looked at me, I don’t know, we just connected there for a second. Because he got it and I’d made it for him.” Bourdain’s almost sensual reverence for detail and earthbound solidity was present in everything he did, from his hosting to his writing to his cooking.

The talent evident in his debut piece for The New Yorker is still shocking: “Gastronomy is the science of pain,” Bourdain wrote in 1999. “Professional cooks belong to a secret society whose ancient rituals derive from the principles of stoicism in the face of humiliation, injury, fatigue and the threat of illness.”

If you should wish to buy, for example, Bourdain’s gorgeous Nielsen desk, which will start at around $800 when the auction goes live online in October, it might help to know that 60 percent of the proceeds will go to Bourdain’s daughter and wife, Ottavia Busia (with whom he was separated at the time of his death). The rest, according to the Times, will be funneled into a new scholarship founded in Bourdain’s name at the Culinary Institute of America. 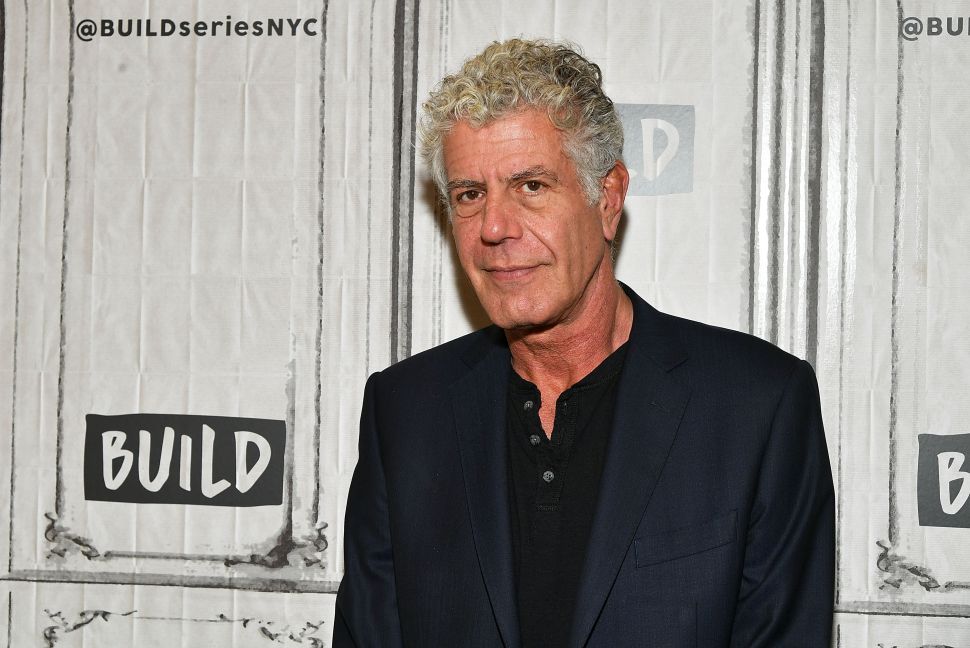