At this point in time, it’s unclear if Banksy will be best remembered for his art, or for his remarkable ability to stir up publicity surrounding virtually everything he does. With his devotion to elaborate jokes and rambunctious capitalist critique, Banksy turns the nebulous climate around his works into an Event, nearly every single time, with admirable regularity. The most recent incident affiliated with the Banksy brand of chaos has to do with his painting of British Parliament, in which all the presumably formerly-human beings in the frame have been turned into chimpanzees. When the painting was introduced to the public in 2009, it was called Question Time. Now, in 2019, Sotheby’s has announced that the painting will be up for auction in early October, but observers have noted that there are certain subtle differences between Question Time and Devoted Parliament, the new name of the work that’s now being put up for sale.

These small but noticeable differences between the former painting and the current painting in question include the elimination of two, previously prominent lights, the shape of a banana that one of the chimps is holding and other small details. Banksy is an incredibly in-demand artist, and Sotheby’s has a lot to gain from the potential sale of Devoted Parliament, which has been predicted to sell for between $1.9 million and $2.5 million. And so, perhaps predictably, the message from the auction house is that this isn’t a Banksy-manufactured controversy, this is an overblown skirmish not even worth investigating further.

SEE ALSO: Pope.L Has a Perfect Explanation for Anyone Stumped by His Huge ‘Group Crawl’ Performance

“This work was first created in 2009,” Sotheby’s said in a statement emailed to Observer. “When, that same year, it was first exhibited at the Bristol Museum, it carried the title Question Time. Since then, the painting has been reworked by the artist and more recently retitled. For instance, the lamps have been snuffed-out and one of the previously upturned bananas now faces downwards; in addition to these and other subtle adjustments, the painting was also given a new title (Devolved Parliament) prior to be being exhibited at the Bristol Museum earlier this year.”

The statement goes on to clarify that Pest Control, the art handling service that works on behalf of Banksy, has confirmed to Sotheby’s that the painting shown at the Bristol Museum in 2009 is the same one that’s currently up for auction; in other words, these are not two separate paintings but one painting that’s been amended sometime in the last decade. For Banksy, this is a pretty tame controversy.

Back in December of 2018, the artist allegedly convinced another artist, who goes by the pseudonym Frizk, to hang a Banksy painting of a peeled banana in the Contemporary Arts Center in Cincinnati without authorization; the painting was almost immediately taken down. And of course, Banksy’s most memorable stunt in recent memory involved rigging his painting Girl With Balloon to dramatically self-destruct immediately after it was purchased at auction for approximately $1.4 million. Summing up the Banksy ideology can be difficult. However, his attitude is perhaps best captured by a message scrawled across one of his paintings currently up for auction at Christie’s: I can’t believe you morons actually buy this sh*t. 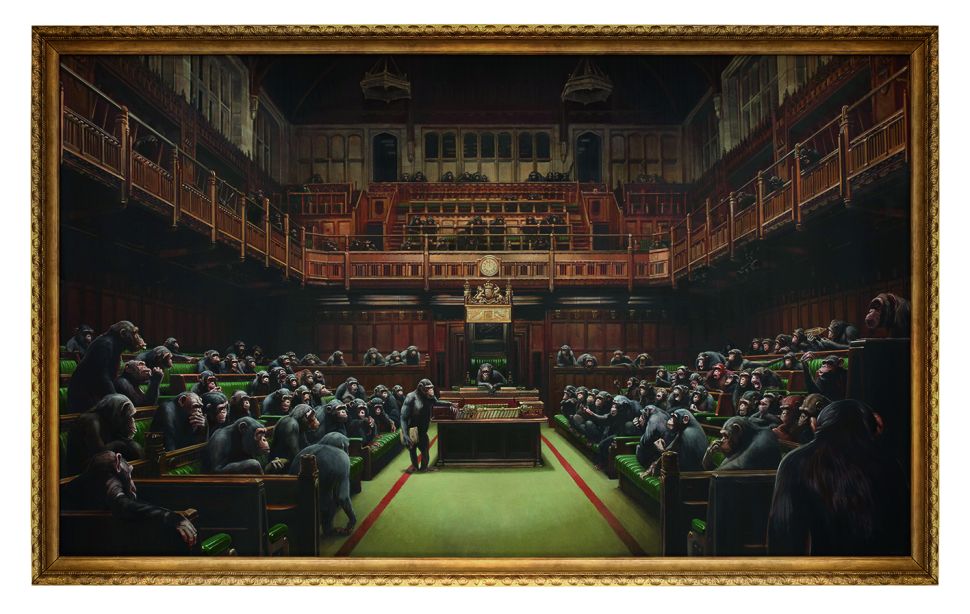