Looking at the work of Vija Celmins requires deep concentration. Not because it is dense with information but, rather, because of what it is lacking. Adornment is expelled, meaning is vanished. They can at first read as cold and impersonal. What is there is simply there: the ocean waves, the desert floor, the night sky are a few of her recurring visual motifs. Standing far enough back, it could be a photograph. But something about the banality catches your eye. Move closer and you see the precise markings of the artist, the time and labor accrued, and realize it is something else altogether. “It is visibly and infinitely handmade,” John Berger wrote of her work.

Shadowed by many of her peers and virtually unknown (or at least underappreciated) by a larger art-viewing audience, Celmins is now the subject of a large-scale retrospective, called “To Fix the Image in Memory,” opening at the Met Breuer on September 24 (the exhibition debuted at SFMOMA in December 2018, and then moved to the Art Gallery of Ontario in May 2019). It is her first major retrospective in over 25 years, and encompasses work—paintings, sculptures, drawings, and prints—made between 1964 and the present.

Born in Riga, Latvia in 1938, Celmins spent most of her early life in the throes of war. She and her family managed to escape Latvia in 1944 and, after a number of years in limbo, bouncing from place to place, they arrived in America with the help of a Christian aid organization. The family settled in Indiana, which Celmins told the New York Times in 2017 is “one of the worst states.” She didn’t stay too long. After a stint at the John Herron School of Art in Indianapolis, she made her way to California, enrolling at U.C.L.A, meeting other artists and moving to a studio near the beach in Venice, where she began to produce what she has called her “first mature works.”

The biographical details are important here. Those paintings that she began making in California were where she developed her unique way of both looking and being looked at in the work. After becoming increasingly frustrated with futile attempts to make work that stood up to others, she decided to break everything down. Letting her eyes wander around the studio, she began painting what she saw: a space heater, a hot plate, a ripped envelope, a gun. Presented as plainly as possible against murky brown and dark grey backgrounds, they were followed by paintings based on clippings from newspapers burning planes and explosions at sea. Color began to disappear, the paintings rendered in shades of grey. The work became more distant, as if threatening to fade from memory.

Reduction would become a key element in Celmins’s work, which coincided with her move, around 1968, to working almost exclusively with pencil on paper. Obvious representation began to recede. Drawings she made of the surface of the moon or waves in the ocean are abstract in an almost perverse way. They are quiet, calm. There is a hint of something recognizable, but no markers leading you toward a conclusion. They pull you inward, like a whisper, but always leave you in doubt.

This doubt can also be read in the repetition of images. Whole years seem devoted to certain kind of surfaces, which are worked over and over again. Beginning around 1973, Celmins moved from the sea to night constellations and arid desert floors. Working from photographs, the content of these works are in some ways meaningless. What matters are the distinctions that result from the process, an almost unconscious personality that reveals itself within material and gesture. It finds itself as it is being made.

But does this kind of rigorous exercise result in anything more authentic? It’s a question that, in some ways, is embedded in the work, and a question that Clemins herself slyly pokes fun at. Her humor is something that is not often commented on in critical appraisals, but can be seen clearly in a work such as To Fix the Image in Memory, 1977-82, from which the exhibition takes its name. Celmins took eleven rocks found while walking in New Mexico and made bronze casts of each one, later painting the casts to have them appear as duplicates of their source. Placed together, it’s nearly impossible to tell the rocks and non-rocks apart.

That comedy is born out of a deep uneasiness that Celmins’ work brings out in the viewer. Little is left to grasp, which leaves understanding in flux. Because of its context you know this is a work of art, but what it makes it so? The answer is always out of reach. So you continue looking, again and again. 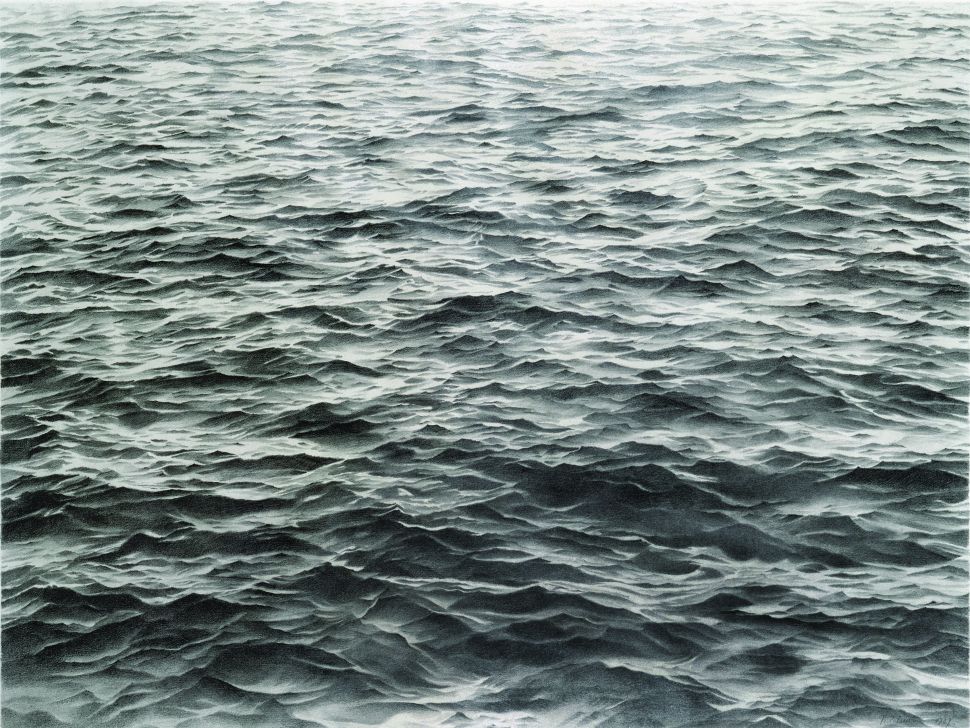