Can a film be at once a singular thing of cinematic wonder and surprise while also being a maudlin retread of the “serious themes” that can make prestige film season such a galactic yawnfest? Ad Astra, the ambitious film from welterweight auteur James Gray (1994’s Little Odessa and 2016’s The Lost City of Z), two-steps this strange waltz to alternatingly thrilling and frustrating effect.

On one hand, the film successfully rescues the space opera from the physics-defying swashbuckling of George Lucas, grounding its story in the Apollo era and inspiring our manned spaceflight imagination in a manner that it hasn’t been since kids were drinking Tang with their Cheerios. On the other, it is just the latest example of one of those autumnal films where an attractive man stares out of a window and thinks wistfully about his dear old dad. The difference is that in this movie, instead of spotting falling leaves and raindrops, he spies Mars in close-up.

SEE ALSO: ‘It Chapter Two’ Piles on the Monsters But Forgets to Bring the Terror

The fellow with the faraway eyes is Brad Pitt, who appears to be in the midst of manifesting and reinterpreting every major masculine archetype of the 20th century. After riffing on the bemused, detached machismo of James Garner in Quentin Tarantino’s Once Upon a Time…in Hollywood, here he is in full Gary Cooper mode, conjuring up a stoicism as vast as the heavens.

Indeed, it’s almost shocking when his character, the dedicated astronaut Roy McBride, encounters a flight crew tasked with shuttling him from the moon to the Red Planet and he remarks to himself how at ease they seem and wonders what that feels like. It is hard to recall any movie star looking more relaxed fronting a major studio picture than Pitt is here. If the dude were any more chill, he wouldn’t be upright.

His relaxed visage—weathered but not yet cracked and often shown in extreme close-up—provides Gray with the perfect canvas on which to project and reflect on themes of ambition, fatherhood and the meaning of life. Yet these are the most conventional and least-engaging aspects of his story, which involves Pitt’s cool-as-a-cucumber rocket man venturing to the far reaches of the solar system to confront his lost and absentee father (played by an under-utilized Tommy Lee Jones) who may or may not have a hand in a series of devastating power surges that could potentially wipe out life on Earth.

The good parts—the ones that grab hold of your imagination and take residence there—are the various complications and conflicts the lead character encounters on the way to a paternal reunification decades in the making. This includes a handful of stunning set pieces, such as a high-speed gun fight on the lunar surface between a pair of rickety moon buggies, a bloody encounter on a stranded ship involving the most unlikely of foes, and an attempt to surreptitiously board a spacecraft mere seconds before it blasts off. If ever a film was the poster child for the journey taking precedence over the destination, it’s Ad Astra.

Even the far more quotidian aspects of Roy’s journey—he flies to the moon on a commercial Virgin flight where a pillow and blanket sets you back $125 and lands at a space station as blandly commercial as Hobby Airport (there’s even a Yoshinoya)—are rendered with a creativity. These imaginative aspects outpace the comparatively orthodox plot as well as the over-sentimental lessons it attempts to impart.

To that end, Ad Astra reveals an unfortunate contradiction. It invites you to thrill in the discoveries and exploration of driven folks like Roy, his father, and a defiant Mars base commander played by Ruth Negga. At the same time, it tsks their boldness in a halfhearted attempt to sell the idea that true satisfaction can only be found in the earthbound delights of family and traditional relationships. Here, Liv Tyler as Roy’s wife symbolizes the latter in a role so gauzily-conceived as to make the rebellious teens she played in Aerosmith videos seem like fully fleshed out characters.

So which side of the movie finally prevails—the lackluster conventionality of its text or the breathtaking singularity of its visuals and action? The latter does, if just by the nose on Brad Pitt’s perfectly imperfect face. Combined with the film’s lavish technical achievements, his classic movie star sturdiness makes Ad Astra a memorable filmgoing experience even as the story it tells slips off into the ether. 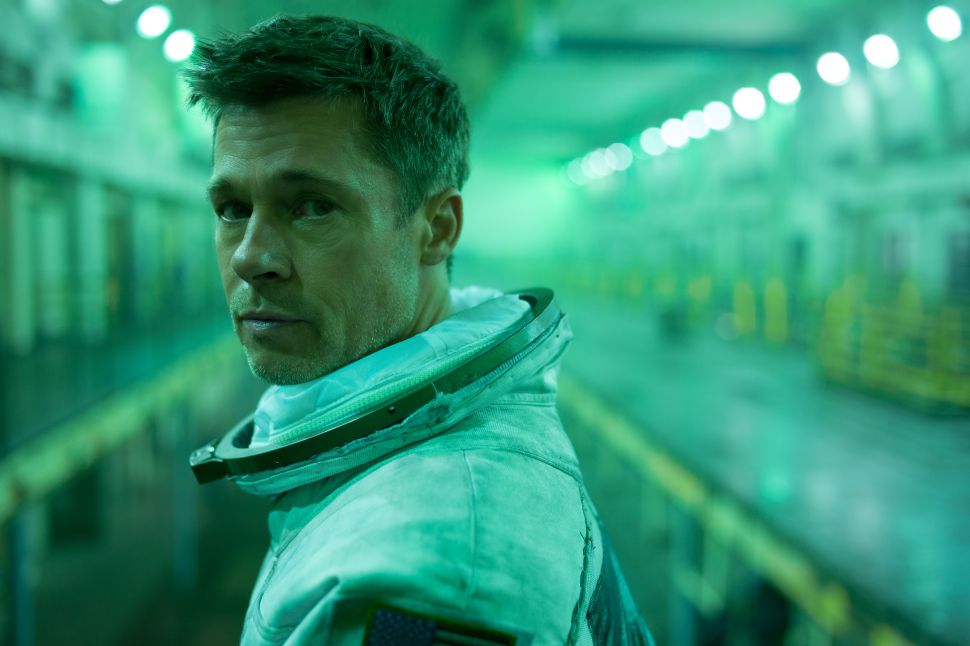