It’s good to have Demi Moore making a comeback after a prolonged absence from the screen, but not in a load of unmitigated crap called Corporate Animals. It’s never smart to make up lists of the worst movies ever made, because every time you do, something comes along that is even worse than what you saw before. But I think it’s safe to say that in the final top ten tally, this abysmal dreck will come in close to the top.

Although she does not get top billing, Moore is the central focus, surrounded by a cast of amateurs who are unknown for a very good reason. She plays a hateful woman named Lucy, the superficial, materialistic, and insincere CEO of a company called Incredible Edible Cutlery, dedicated to ridding the planet of plastic clutter by inventing knives, forks and spoons you can eat. Her platform includes pep talks like “team work makes the dream work,” and she challenges her administrative staff to be more creative and build stronger character with exploratory adventures like crawling through dark underground caves in Mexico full of scorpions, spiders, snakes and bad acting.

While they’re underground, the cave collapses, killing the incompetent guide, gashing open another boy’s leg, and burying ten people alive. The movie is about what they do while trapped for a solid week waiting for rescue with a dwindling supply of resources that consists solely of a sample box of edible table settings. After seven days, they hate each other and stave off starvation by eating the dead man, limb by limb. It’s a comedy.

Poor Moore, trapped not only by a cave⁠, but by a script that forces her to confess she’s been abusing her male assistant as a sexual slave with lines like: “Men have been fucking their secretaries for decades⁠—why can’t women?” The boy says, “She’s been Weinsteining me.” Once they chow down on the corpse of the tour guide, the next consideration is munching on the wounded boy’s thigh before it smells up the cave with gangrene.

“That’s disgusting,” snarls Lucy before she’s crushed and killed by a pile of falling rocks, “I couldn’t eat a person. If we’re going to eat someone, it’s more ethical to eat ourselves.” “You mean, cut off our arms and eat them, like James Franco?” “I’m not eating my own fucking arm! That’s where I keep my watch!” So goes the dialogue.

The idiotic screenplay is by someone forgettable named Sam Bain. The direction is by Patrick Brice, whose distinctive resume includes such history-making classics as Creep and Creep 2. How he coerced Moore into appearing in a movie as sick and stupid as this one really defies explanation. It couldn’t be the money. Corporate Animals looks like it was made for carfare. 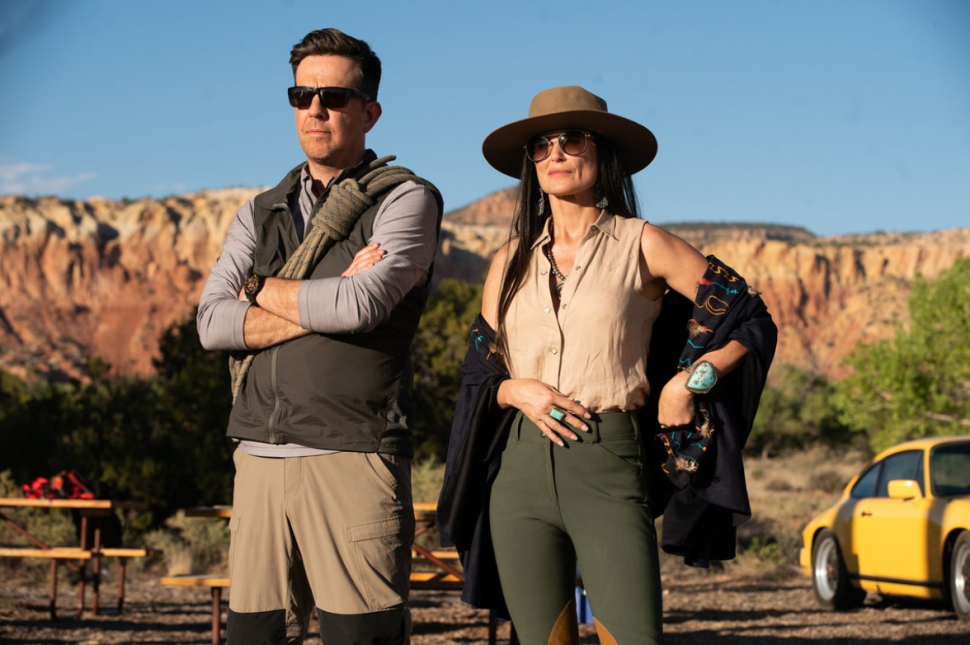