“Would you be interested in driving a Maserati?” they asked. Normally my greatest enthusiasm is reserved for electric cars. I’d never driven a Maserati before, though even if I had, I would have likely said yes. Who would say no to driving a Maserati? Maybe Greta Thunberg, but I don’t even know if she has a license.

This particular Maserati was a GT convertible. It was painted “Grigio Alferi,” so gray. The interior was “nero,” with that carbon-fiber checkerboard trim that manufacturers like to throw in to give you the illusion you’re Speed Racer. It had bright-yellow brake calipers and 20” rims, and looked tight and angry.

SEE ALSO: Brooklyn’s Formula E Race Reveals What We Can Expect From Electric Cars of the Future

This car did not, despite the song, do 185 MPH, but it could jack itself up to 177, though I never got within 75 of that, even on the 85 MPH-speed limit toll roads that I can get to pretty easily from my house. It has a V8 engine that generates 454 horsepower and can get to 60 MPH in under five seconds. There was a red level by the gear shift that I could flick, causing the GTC to go into some sort of racing mode. It made a cool sputtering sound that projected the illusion that I was whipping it around the Nurburgring, or the track at LeMans.

And yet I wasn’t. I’ve seen reviews that say this car is “perfect for daily driving,” but for who, exactly? Mostly, I was driving this thing around the suburbs of Austin. It grabbed some attention and some thumbs-up, as usual with rare beasts in the wild. It was damn fast, that’s for sure, but it was also rumbly and uncomfortable, and had a ton of body roll through tight turns. Maserati definitely didn’t design it for getting into or out of, and if you wanted to stash more than one sack of groceries in the trunk, you were in big trouble. The convertible feature was cool. Like all modern ragtops, you just pressed a button and the car did the work for you. That wasn’t really a desirable feature in a “daily driver,” especially one with a sticker price getting close to $200,000.

I wondered what was wrong with me. How could I drive a Maserati convertible and hate it? Part of the problem was that it was kind of expensive and clumsy and bad. There’s still plenty of market for supercars, including ones that Maserati makes. There are always sheiks and entrepreneurs willing to take a million-dollar baby for a twirl. And there’s certainly plenty of enthusiasm for the six-figure sports car, as evidenced by all the excitement about the coming-soon Porsche Taycan electric, one of the most anticipated vehicles of the decade.

And it’s not the noise, either. Judging by the monster trucks and smokestack huffers I see on a daily basis in Texas, some people still like their cars loud. If your car is going to be fast and loud, it had better be a Hellcat RedEye or a supercharged Mustang or some other sort of American muscle job.

Toward the end of Maserati week, a friend of mine went to see a Lonely Island concert downtown. I went out of the way to pick him up, because he wanted to drive in the convertible. We rolled down the top and he cranked up the radio to a dumb R&B station. I drove down the street and he took an Instagram Story video of me at full cruise. OK, that was a great night and a fun gag. Still, a $200,000 car is not something with which you amuse your friends on TikTok. Or maybe it is, But in the age of Tesla, a smooth-looking, loud mini sports car seems kind of like a relic.

A few weeks later, they brought me something a tad more conventional, a 2020 BMW M340i Sedan. Comparing that to the Maserati GTC is like putting apples up against super-apples. It only had a six-cylinder engine, and 19” wheels. But not only did it have a redesigned front fascia that gave it a tougher profile, it was still sleek and gorgeous, and it drove like anyone’s fantasy of a BMW. And you got the sense that, unlike with Maserati, within my driving lifetime BMW will make an electric or a plug-in variant of this car available. And even if they don’t, people are still going to want to drive, and buy this one. Some dinosaurs are able to evolve. 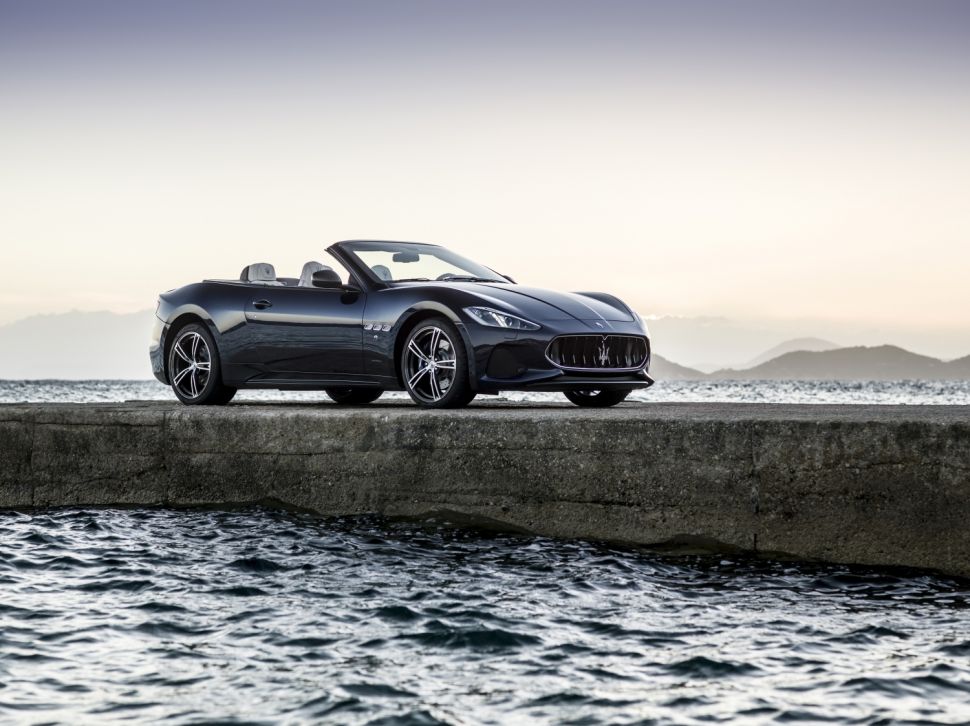