Thinking about the 2016 election is unpleasant for a whole plethora of obvious reasons, but one of the key sources of lasting agony is the firestorm that erupted around Democratic candidate Hillary Clinton’s emails. As everyone is now painfully aware, Donald Trump and a huge number of Republican pundits were convinced that the existence of Clinton’s private email account, which she had established for herself during her tenure as Barack Obama’s Secretary of State, served as evidence that Clinton was in the habit of obfuscating crucial information from the American public. Now, years later, Clinton has reportedly revisited the infamous documents at an unlikely locale: They’re currently on display at the Despar Teatro Italia as part of the Venice Biennale, and Hillary herself dropped in for a visit earlier this week.

Found my emails at the Venice Biennale. Someone alert the House GOP. pic.twitter.com/eeXaKhy9Dz

Approximately 60,000 pages of Clinton’s emails were printed out and displayed by American poet and provocateur Kenneth Goldsmith, who also created a facsimile of the Oval Office’s Resolute Desk as part of the exhibition. Goldsmith told Observer he wasn’t personally present for Clinton’s visit, but instead directed inquiries to Francesco Urbano Ragazzi, the group of curators who managed his show. The curators said they were nothing less than shocked when they found out that Clinton was actually planning to check out Goldsmith’s creation, called Hillary: The Hillary Clinton Emails, 2019, herself.

“I would describe what happened as something between the perfect tautology and a short-circuit between art, reality and fiction” the group of curators told Observer via email on Friday. “Mrs. Clinton stayed in the exhibition space for about one hour creating a vertiginous Droste effect and a sweet state of grace.”

Her reaction to the exhibition, however, was far less clear in her documentation of the visit on Twitter, where her captions of images from the Biennale suggested a more combative take on the whole episode. “Someone alert the House GOP,” she posted. Losing to Donald Trump is a hurt that one doesn’t get over quite so easily. 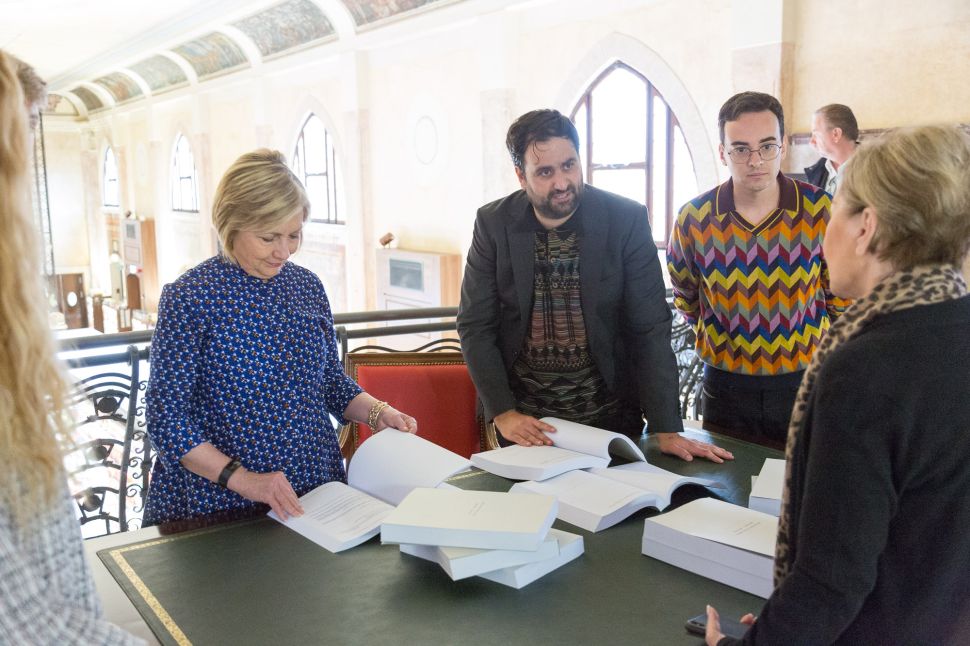