Despite an occasional entertaining turn, I have never thought much of Jennifer Lopez. Her acting has been mediocre and the noise she calls singing has left me cold. But you’ve got to give credit where credit is due. J-Lo has relentless perseverance, and the qualities her fan base adore most—awesome beauty, tireless energy and more curves than a scenic railway—are very much evident in Hustlers. This works in her favor, since everything around her is trashy and forgettable. J-Lo is the only reason to see it. As a pop flick of no consequence, it’s inviting but forgettable an hour later—but the praise Lopez has received is well deserved. She’s developed nicely as an actress. Call it learning on the job.

SEE ALSO: ‘The Goldfinch’ Is One of This Year’s Deadliest Disappointments

Based on a 2015 article in New York Magazine, Hustlers is the true story (sort of) of a group of New York strippers and pole dancers who reacted to the 2008 Wall Street crisis by drugging their most financially solvent clients and maxing out their credit cards in a fanny-shaking mix of crime, sex and money-mad embezzlement. So the direction and screenplay by Lorene Scafaria plays ping pong with familiar genres as both a comical heist flick and a cautionary tale.

The idea is to show how women can do anything men can do, only better. Men in three-piece Brioni suits and neckties hustle their clients all day in the stock market, then after dark they breeze into the sex club depicted here to rip off the lap dancers. So the strip-club sisters devise a plan to turn the tables and rip off their male predators, which their gang leader Ramona (Lopez) insists is perfectly OK as long as nobody gets hurt. So the stage is set for a different kind of wallet-emptying embezzlement hustle that is dangerous, lucrative and illegal, but forget any notion that it breaks new ground.

Borrowing dog-eared elements from Widows, Showgirls, and half a dozen episodes of Law and Order: Special Victims Unit, the movie centers on former centerfold Ramona and her best gal pal Destiny (Constance Wu from Crazy Rich Asians), who strips to support her impoverished grandmother, while they tell their story to an astonished journalist (Julia Stiles).

Scafaria’s screenplay injects humor into the actions of the women so you’ll overlook the fact that they are spiking their customers’ drinks with Ketamine and MDMA, which could get them 20 years to life in prison. Only Destiny shows mild remorse and thinks of the men as victims, especially after some poor sucker informs her his mortgage and childcare are in serious jeopardy without his Visa card.

Which leaves J-Lo to pretty much bring Hustlers to life and keep it there. Happy to oblige, what she does on a pole is worth the price of a ticket, even if it defeats the purpose of the film itself. 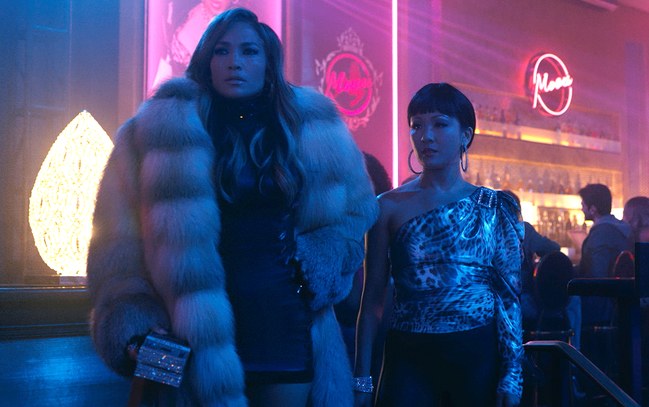