‘Eastern Promises’ by Piotr Uklański on view at the Pera Museum as part of the 16th Istanbul Biennial. David Levene

Istanbul’s capricious fall weather was welcoming to thousands of visitors this past week, allowing both guests and locals to comfortably meander its winding and famously hilly streets in search of art as the city welcomed the 16th edition of the Istanbul Biennial, the 14th iteration of art fair Contemporary Istanbul, and the reopening of contemporary art museum Arter.

Gentle weather was joined by hopefulness in the air with these efforts to reemerge from the past few challenging years with an unsettled economy and limitations on free speech. These three major events and a gush of concurrent exhibitions, performances, panels and receptions pumped blood into the metropolis, which has been striving to emerge from its ashes as a cultural hub uniquely positioned between old Europe, the rising Middle East and budding Eurasia.

SEE ALSO: Hillary Clinton Dropped in to Read Her Own Emails at a Venice Art Exhibition

The biennial, organized by French curator Nicolas Bourriaud under the title “The Seventh Continent,” borrowed the soon-to-open Istanbul Museum of Painting and Sculpture as its main site, spreading works by more than fifty artists across its four floors as well as the Pera Museum and Princess Island. In these locations, international names such as Mika Rottenberg, Rashid Johnson, Piotr Uklański and Jonathas de Andrade as well as local stars Hale Tenger, Ozan Atalan and Elmas Deniz delivered commentaries on the exhibition’s themes of waste, ecological decline and human intervention into the ecosystem, adopting the eponymous massive island of debris amassing in the North Pacific as a metaphor and starting point. 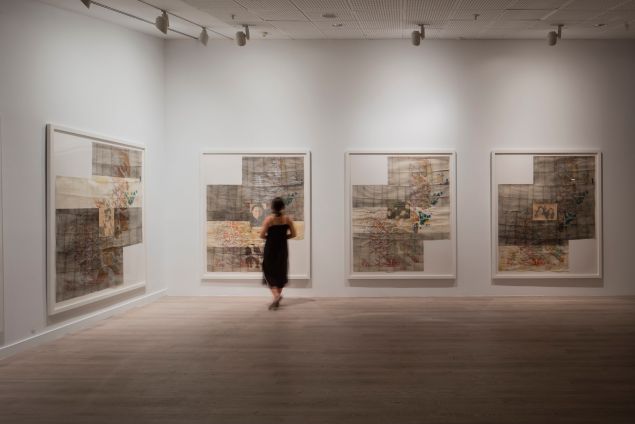 ‘Old School Map’ by Pia Arke on view at the Pera Museum as part of the 16th Istanbul Biennial. David Levene

Contemporary Istanbul returned to the Istanbul Convention and Exhibition Center for an ambitious year, attracting international galleries such as Marlborough, Galerie, Michael Schultz and High Art to join Istanbul staples Dirim Art, PI Artworks, Sanatorium and X-Ist. More than 70 galleries from 23 countries exhibited a total of 510 artists, boasting the energy missed in the last few years due to the Turkish Lira’s abrupt devaluation and resulting economic hardships. Under the helm of its French director, Anissa Touati, the fair projected a promising future for the Turkish art market, which heavily depends on local collectors and philanthropists, many of whom have been preparing to open private art spaces to exhibit their collections. In this vein, the fair included an exhibition of recent purchases by its select collectors, titled “Recent Acquisitions,” on its lower floor. The chairman, Ali Güreli, underlined culture’s crucial role for the future of Turkey as an international force, commenting to Observer, “We need soft powers, like art, to maintain sustainable foundations with strong economy and politics.” 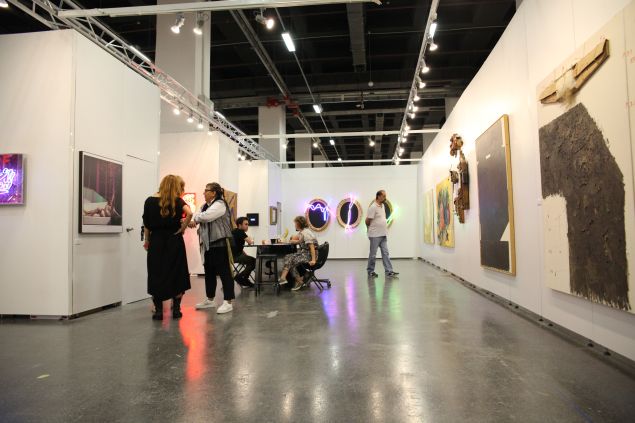 After operating on the city’s historic center, Beyoğlu, for eight years, Arter has been on hiatus since 2018. Now, it takes up its new home in the city’s gentrifying Dolapdere neighborhood with a building designed by the British firm Grimshaw Architects (also the masterminds behind New York City’s Fulton Street subway station). For the opening, six concurrent exhibitions culled from the private collection of the Vehbi Koç Foundation were spread across the 193,000-square-foot building, delivering expectations for the museum’s future role as an international key-player on the institutional level. As the institution’s founding director, Melih Fereli, told Observer, it’s hoped “Arter’s new home, with a variety of dedicated gallery and performance spaces, will not only make a difference in quantity and scale, but it will provide a cross-disciplinary platform for cutting edge artistic production that would be expected of a fully-fledged cultural institution.” 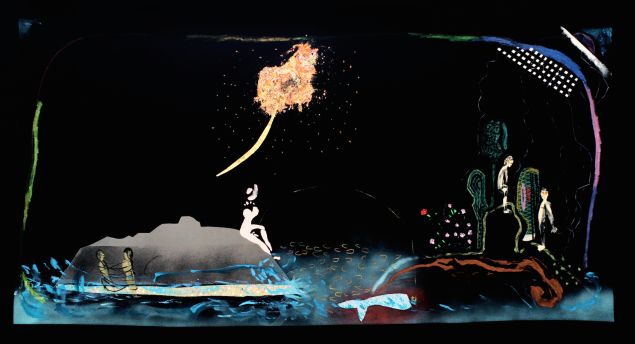 Simultaneously, a broad range of galleries, art spaces and studios joined the bustling week with energetic and diverse programs to contribute to the city’s rejuvenation plan. Nilbar Güreş, a prominent artist based in Istanbul and Vienna, returned to the city with a tightly-curated exhibition titled “Magnet and the Moon,” at one of the city’s leading galleries, Galerist, to contemplate on the country’s troubling panorama of women and queer rights. Using fabric and stitching methods in painterly and sculptural techniques, Güres meditates on sexual freedom and body politics, which have long been the country’s hot topics, aggravated recently by the public killing of a Turkish mother by her ex-husband. “I am more attentive to the dynamics of life in a country than the museum and exhibition openings; there is an extraordinary amount of violence around women and everything that is feminine,” Güreş told Observer. 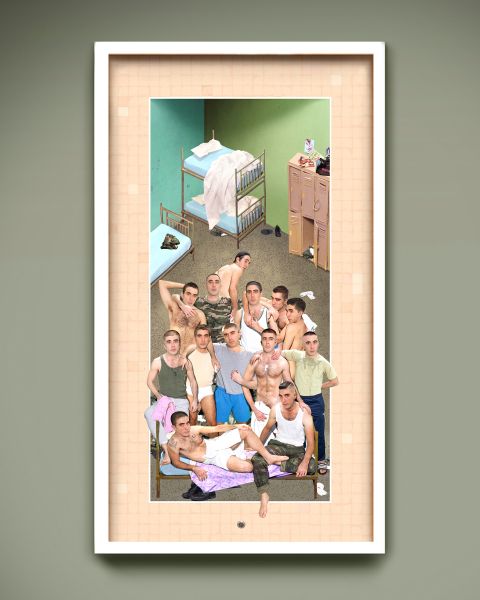 Brooklyn-based artist Sinan Tuncay’s exhibition, “Reserved for Men I’ve Never Become,” at C.A.M. Gallery, located at the antique shop-filled neighborhood of Çukurcuma, looks at a different side of this dynamic. Rendering a nuanced portrait of masculinity, Tuncay uses tokens from Turkish culture and its restricted definition of manhood. Tuncay created the works by photographing himself in various fashions at his Brooklyn studio and digitally collaging them into theatrical settings. They radiate with their unabashedly joyful colors and spot-on depictions of male stereotypes.

Meanwhile, Artnivo, a traveling pop-up gallery project, has taken over a space in Akaretler, an art and design district in the Beşiktaş neighborhood. Presenting an interactive performance series titled “Happening Now,” the focus of this iteration is a performance collaboration by local artists Seyhan Musa and Mehmet Öğüt, called Catharsis. In the work, the duo have staged a three-step piece that uses movement, sound and video projection to immerse viewers in a tranquil sonic escape amidst the city’s hectic chaos. 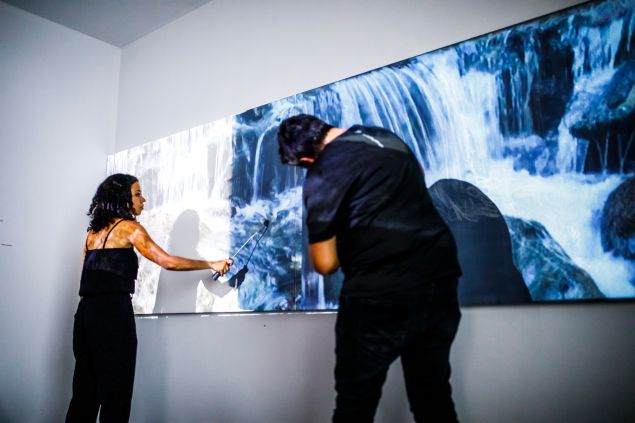 And New York artist Daniel Arsham has collaborated with high-end Turkish streetwear line Les Benjamins for an exhibition, titled “Self Structure,” at the brand’s flagship store in the chic shopping district Nişantaşı. Accompanying Les Benjamins’ playful take on streetwear and high fashion, Arsham’s sculptures recall findings from archeological digs and are based on his own childhood belongings, such as backpacks, Walkmans and sneakers. “Since day one, my dream was always to put Istanbul on the map. Collaborating with Nike and Puma, and now tapping into art with Daniel Arsham—[this] is exactly what the youth in Istanbul is waiting for,” Les Benjamins founder Bünyamin Aydın told Observer about his vision behind bridging fashion and art for his city. Echoing the heydays of 2012 when Istanbul was inundated with a sudden rush of art galleries and a thriving social scene, the current surge in the city’s cultural landscape is hoped to remain by locals and visitors alike, despite critically unstable socio-political and economic grounds that equally depend on national and international politics.