Only a fool would attempt to play the one and only Judy Garland, onscreen or anywhere else. Many have tried and failed (although Judy Davis came closest to the mark in a now forgotten TV special), because nobody can or should. Despite an avalanche of misguided raves, Renée Zellweger as the greatest entertainer of the 20th century in a film called simply Judy is nothing more than another gimmick. You won’t get the real deal here, no matter which gushing hysteric you read.

The real Judy (like Piaf and Dietrich, two names were never necessary) was an overload of genius so complicated you could never get the whole story into one script, so poor Zellweger’s failure to process every aspect of a true show-business legend into an unforgettable whole is totally understandable. She doesn’t look or sound like Judy. Still, she works so hard to deliver her own brand of aborted accuracy that she grows on you, even if the movie doesn’t.

Concentrating on the final tragic days of Judy’s life, when she settled (and died) in London, during and following a series of physically exhausting, emotionally wrenching, sold-out concerts produced by infamous showman Bernard Delfont (Michael Gambon) at a club called Talk of the Town, the film eschews the elements that made her unique and concentrates on the dark, depressing downfall of a glittering life. The result, I’m sad to say, is a sorry, sick, self-indulgent melodrama in the one-note melody of a funeral dirge.

Broke, unable to sleep, eat or rehearse, desperate to hold onto the love of her children Lorna and Joey by long distance after they were dispatched by penury to live across the pond with their father, Sid Luft, and consumed with the loneliness and insecurity that drove her into her last marriage to bartender Mickey Deans (Finn Wittrock), she stumbled onstage night after night fortified by booze and tranquilizers, sometimes cursing the audience and falling down onstage in the middle of a song. (She died at 47, six months after singing “Somewhere Over the Rainbow” one last time).

No doubt some of this happened. But there was so much more. What Judy misses is the unimpeachable fact that helped her survive the punishing ordeals, both personal and professional—her dazzling sense of humor, none of which is in evidence here. Instead of a sober assessment of the greatest musical career in Hollywood history, what emerges in Judy is a drunken dossier of catastrophic self-destruction.

In the stale, generic script by Tom Edge, woodenly directed by Rupert Goold, annoying flashbacks, to the demons that poisoned little Frances Gumm as a child commodity at MGM to the hard-working commercial blockbuster assigned the name Judy Garland, are too fractured to make much sense. Starved and drugged by Louis B. Mayer, pushed and denied a normal life, always encouraged to be different and promised that her fabulous voice would make her million dollars before the age of 20—it all happened, and Judy makes a weak stab at showing the enormous price she paid for stardom.

Unfortunately, what we get is a litany of unpaid bills, hotels that bounced her out in the middle of the night, endless custody battles with husband Luft, lawsuits, breakdowns and suicide attempts. What we don’t get are the happy chapters, the career triumphs, or the close bonds with her children (you’d hardly guess she had a daughter named Liza Minnelli, who appears briefly at a Hollywood party).

What you do get is an abundance of Zellweger. A curious and dubious choice, she squints her eyes in a terminal grimace while pouting, posing and pursing her lips like someone who accidentally swallowed a spoonful of turpentine. Having said all that, I confess Zellweger has some alleged alchemy, but none of the true magic that still keeps Garland alive in the hearts of millions. The one missing element from which Judy never recovers is Judy herself! 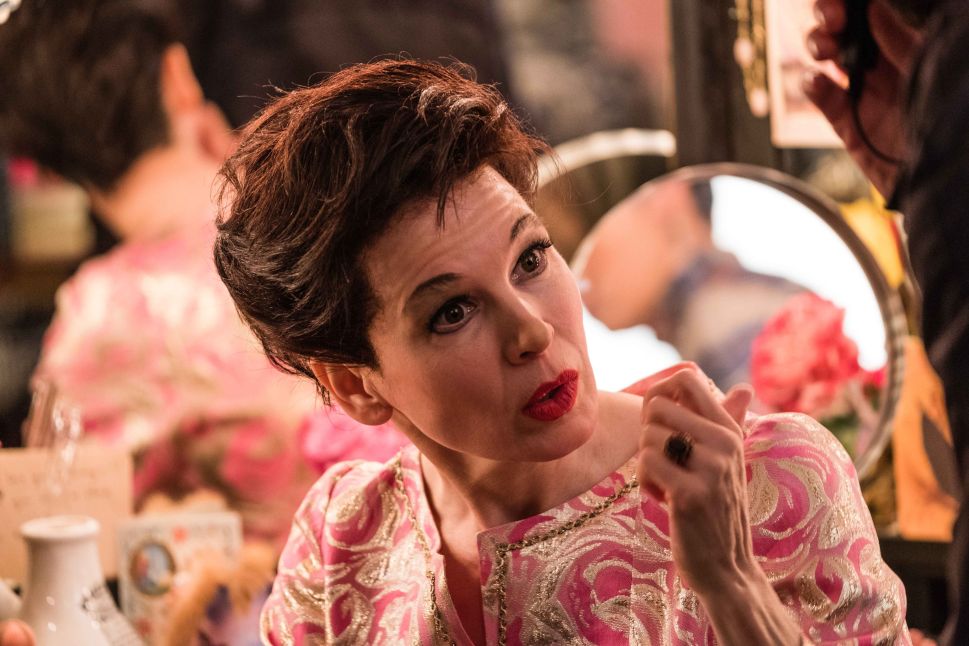