Blanketed by generous, late-September sunlight, a huge crowd of artists, journalists, board members and generally fabulous institutional heavyweights watched on Friday afternoon as Kehinde Wiley, one of the world’s most celebrated living artists, unveiled his latest undertaking. A silver slipcover was pulled away to reveal a magnificent, enormous sculpture of a black man in street clothes astride a horse, planted smack dab in the middle of Times Square. Rumors of War, the title of the piece, is a reference to a series of Wiley’s paintings that similarly depict men of color in powerfully authoritative positions aboard equine steeds. After its stint in New York, the sculpture will find a permanent home this winter at the Virginia Museum of Fine Arts in Richmond, Virginia.

The significance of Wiley’s first foray into public sculpture is bombastically evident. In 2017, Wiley’s lushly green Presidential portrait of Barack Obama not only made him a household name, it made his vision part of what might be called the American collective unconscious. Rumors of War feels like it has the potential to be instantly indelible in the same way. The VMFA has long been anticipating the debut of Wiley’s sculpture, which represents an explicit rebuke to the hundreds of monuments to the Confederacy that still stand in Virginia and the thousands of Confederate monuments that are still erect all over the country.

“Honestly, this makes me think more about where this story starts,” Wiley said in his address to the crowd on Friday. “The story starts with going to Virginia, of course, and seeing the monuments that line the streets. But it’s also about being in this black body. I’m a black man walking those streets, I’m looking up at those things that give me a sense of dread and fear. What does that feel like physically, to walk a public space and to have your state, your country, your nation say ‘this is what we stand by?’ No! We want more, we demand more. We creative people create more, and today we say yes to something that looks like us. We say yes to inclusivity, we say yes to broader notions of what it means to be an American.”

The jubilant defiance in the air was reflected both by the crowd and by the Malcolm X Shabazz High School marching band, which performed both before and after the sculpture was revealed. Sean Kelly, whose gallery has represented Wiley since 2010, was also on hand to praise the artist.

“Monuments have always historically been vanity projects that are erected primarily to the victors,” Kelly told Observer. “I thank we have to think about winning in a very different way. I think it’s a moment that we all need to reflect upon not coloring within the lines of other people’s priorities, but actually recasting our own priorities.”

The conscious reconfiguring of perspective was Friday’s overwhelmingly evident theme. “Rumors of War offers a counter-narrative to an incomplete American history,” Alex Nyerges, the Director of the Virginia Museum of Fine Arts, told Observer this week. “This installation is meant to invoke a dialogue—about who we memorialize, about what our values should be. I believe that the resulting conversation is just as much a part of the artwork.”

The VFMA, for its own part, has of late done a considerable amount of work to insure that the demographics of their staff reflects their values when it comes to racial diversity. “In the last five years, our leadership has evolved to be 50 percent white and 50 percent non-white,” Nyerges continued. “Prior to this, our executive leadership consisted of four men, one woman, and no people of color. We had to reflect on the values that we wanted to demonstrate, and that’s where institutional change starts.”

In addition to all these profoundly welcome steps forward, Wiley might also have done something else that’s unprecedented in New York City: given longtime, hardened locals a good reason to go to Times Square. 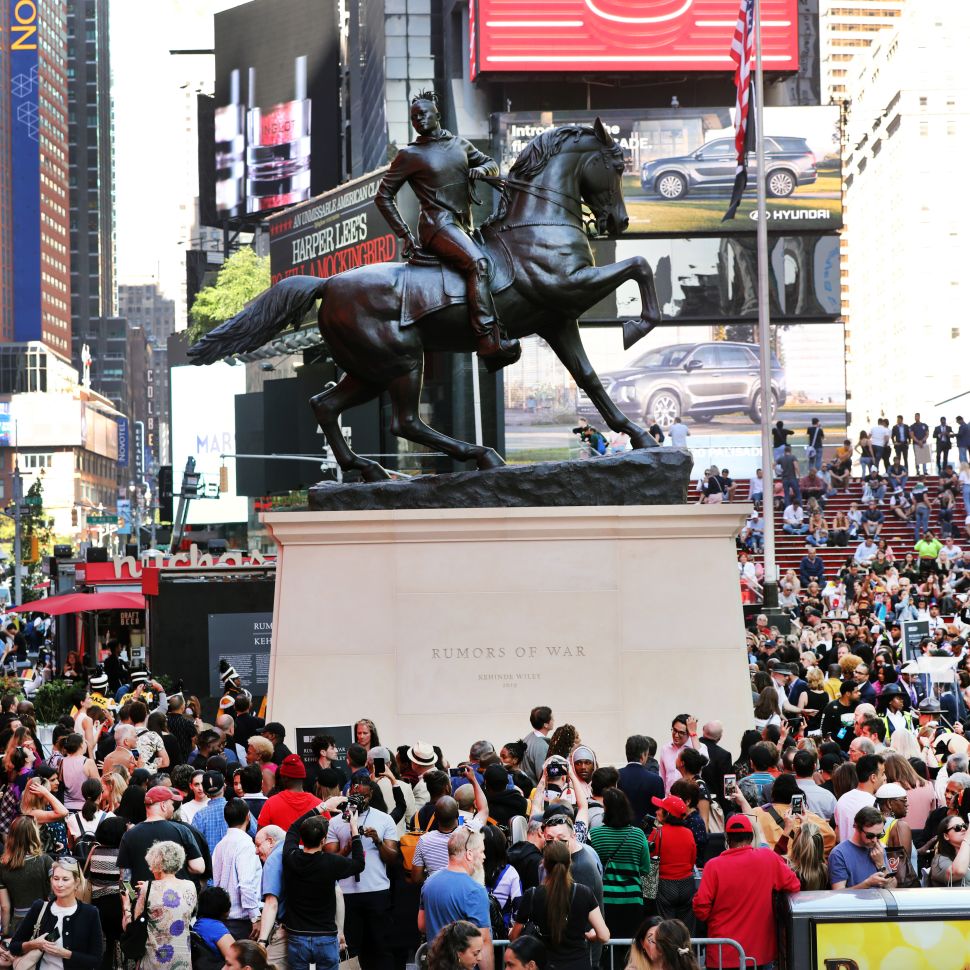